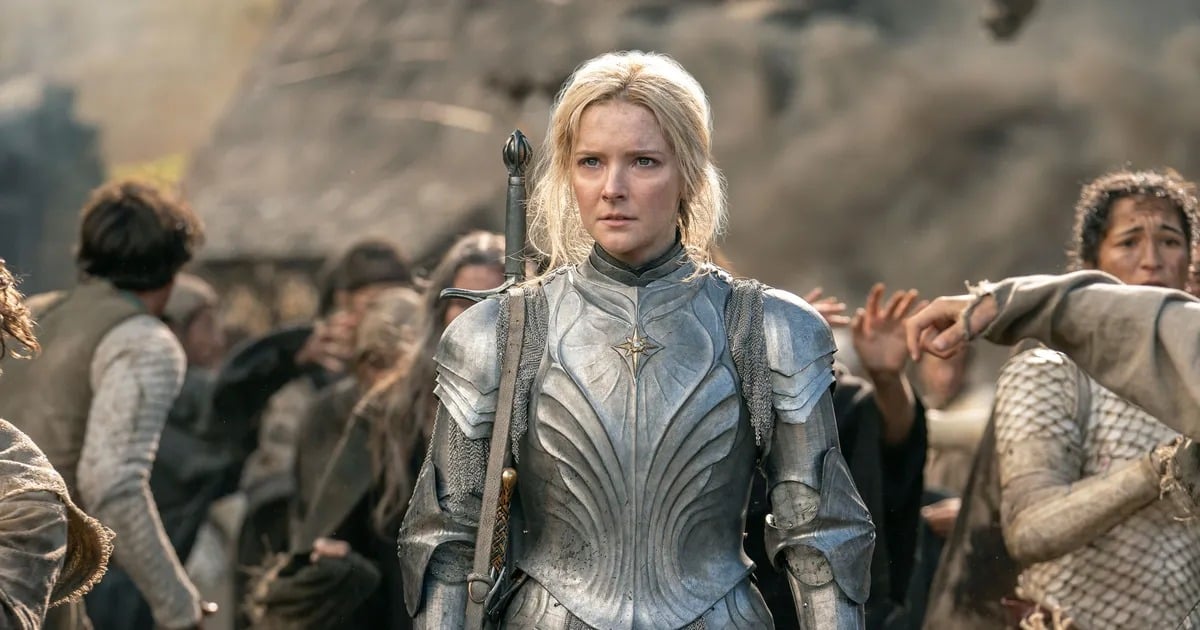 When the One True Ring was finally thrown into the fires of Mordor, peace and justice were restored to Middle Earth. The Kingdom of Men found its sage leader, the Hobbits earned an unparalleled place in history, and friendship was renewed between the Elves and Dwarves. The Elves recognized that the sun was setting on their glory, and headed into the West to the Grey Havens, thus starting Middle Earth’s Fourth Age.

But there are stories untold about the earlier civilizations of Middle Earth. Tales of heroics, valour, and friendships that many believed were lost to time across the millennia. Stories about an older dark force rising to usurp the peace. Only whispers in the mist, briefs rumours swirling from the mountains, and incomplete texts from which historians and elders have tried to extrapolate more comprehensive knowledge. What once was thought lost has now been found. These are the stories of a dark cloud rising. These are the stories of the Second Age…

A Review of Episode 1: “A Shadow of the Past”

And here we go. It began as a jaw-dropping news story in 2017 about Amazon purchasing the rights to J.R.R. Tolkien’s The Lord of the Rings and its appendices for a staggering $250M, to casting announcements (a largely “under the radar” motley crew of thespians), and news of plans to spread the stories of Middle Earth’s Second Age over no less than five seasons. At long last, after much excitement from some fans and much trepidation from others, Amazon Studios’ The Lord of the Rings: The Rings of Power has begun streaming on Prime Video as of Thursday evening, Sept 1st, 2022.

Supported by an army of producers (J.D. Payne, Patrick McKay, Lindsey Weber, Callum Greene, to name but a few) and a platoon of writers (among them Gennifer Hutchison, Helen Shang, Jason Cahill, and Justin Doble) and a team of directors starting with J.A. Bayona (The Impossible, Jurassic World: Fallen Kingdom), the show sheds Silmarilli-type light on the relatively ill-defined Second Age. “Relatively” insofar as the Appendices in The Return of the King reserve several pages to what transpired during that time, but only so much can be said in about 50 pages when relating an entire millennia’s worth of events. As actor Dylan Smith shared in his interview with Tilt Magazine, Amazon’s streaming series is a marriage between what we know from the books, and what was left unsaid. The latter part is what’s being interpreted by the show’s creators.

“Episode 1: A Shadow of the Past” does what any show with such lofty aspirations arguably needs to. It’s one thing for Tolkien students to know every nook and cranny of Middle Earth. It’s another to allow the layperson to follow along and understand what in carnations is happening. Directed by J.A. Bayona, who helms the two episodes that jointly premiered, “Shadow of the Past” opens in a rather clever fashion.

The audience meets a familiar face, albeit at a different age. Galadriel is a young Elf, school-girlish, preparing a paper boat for a leisurely sail in a tiny stream. Her happy day is ruined by a small group of bullish Elves who toss pebbles onto her creation, sinking the wannabe ship. Her older brother Finrod (Will Fletcher) comforts her with some words of wisdom. Rocks sink because they stare into the darkness whilst ships sail because they look off into the light. Always look for the light and you’ll be fine.

After seeing in live action the now famous first-ever production still teased in August 2021 that depicts the glorious light shining on the Elvin domain, Bayona takes viewers through a series of big events that highlight the First Age, a bit like The Fellowship of the Ring’s preamble (which, incidentally, shared how the Second Age concluded). Morgoth, Sauron’s predecessor, overshadowed the lands, stripping them of hope and happiness with dark forces of orcs and whatever foul creatures he aligned himself with. Finrod is even seen in action in one of the show’s early “money shots”. Whereas death was a distant thought for Elves up until then, the great battles of the First Age sadly brought the graceful folk up close and personal with it.

With Morgoth defeated at long last, there are fears that his pupil Sauron will take over the reins of evil duties. This encourages a now young adult Galadriel (Morfydd Clark) to hunt the enemy down and vanquish him once and for all. This is essentially where the story proper of The Rings of Power begins.

The word that will surely be on the tip of the tongues of many regarding a “Shadow of the Past” is “setup.” It can be argued that the strategy is understandable. The world of Middle Earth is quite detailed and complex. Whereas Peter Jackson had about 5 minutes to set everything up for a 3-hour long movie, J.A. Bayona and company are hoping to develop the tales of the Second Age over the course of multiple seasons. They’re under no obligation to brush past character and plot details that will undoubtedly become important in later episodes, possibly future seasons. Taking more time is forgivable in this instance.

What the filmmakers do well is keep the pace brisk and fun enough to not make the initial episode feel like a slog. The Galadriel of Rings of Power (henceforth ROP) is not the same character most fans know from previous iterations. She is considerably younger and at a vastly different place in her life. Not an elder statesperson for her race but rather an army general who guides her squadron with an obsessiveness born out of the horrors she witnessed during the war against Morgoth. Rather than see the light, she is in fact staring into the darkness she believes still lurks.

In just over an hour ROP effectively sets up what the socio-political situations are for the Elves, Humans, and Harfoot. Harfoot? Yes, Harfoot.  Proto-Hobbits, in essence. Unlike their future generations, the halflings of the Second Age are akin to gypsies. Always on the move, constantly on the lookout for threats to their temporary home, such as the Men who roam by, caring for their own lands. From the time spent with this happy if cautious folk, the standout characters are Elanor “Nori” Brandyfoot (Markella Kavenagh) and her best friend Poppy Proudfellow (Megan Richards). Nori has a daring streak in her and yearns for adventure. Poppy is the wingman who feels obligated to plead warnings, yet always finds herself following in the footsteps of her closest friend anyways. Sadoc (Lenny Henry) is a Harfoot elder who, through reading texts and his observations of their surroundings, smells that something is amiss. What exactly remains unknown.

The Elves encountered, apart from the previously introduced Galadriel, are a younger Elrond (Robert Aramayo), with whom she shares a great friendship, their king Gil-galad (Benjamin Walker), and the watchtower patrolman Arondir (Ismael Cruz). With the war officially over, Arondir’s time protecting a small land populated by humans ends, much to his dismay.

Why? because of the feelings he holds for the delightful human Bronwyn (Nazanin Boniadi). A single mother, her people are visibly the lowest of the low amongst the races. But then again, their king has yet to return. Living in relative squalor, humans don’t have any sense of societal or cultural direction. Bronwyn is one of the few bright spots, which is perhaps why she and Arondir have a connection, one that most from their respective races would frown upon.

But has the threat of darkness truly been squashed? Galadriel believes she knows better. Sadoc senses something is wrong in the air. And then there is the strange sickness afflicting the animals on human farmland. A sickness Arondir and Bronwyn believe comes from nearby land, within walking distance. Thus begins their journey.

Galadriel’s biggest decision arrives at the conclusion of “Shadow of the Past.” When faced with the prospect of entering the Grey Havens as a reward for her military efforts, she chooses to remain in Middle Earth. Something simply isn’t right. And then there is the shocking discovery made by Nori at the very end of the episode. Something never witnessed before in any live-action depiction of Middle Earth before. Thus “Shadow of the Past” is about the choices our protagonists make to both grow as people and set in motion important elements for the Second Age.

-The acting standouts for now are Markella Kavenagh as Nori, Moryff Clark as Galadriel, and Robert Aramayo as Elrond. They each possess a magnetism that wonderfully colours their respective roles. This is especially true of Kavenagh, the adventurous Harfoot. She does not know much about the outside world and its dangers but wants to.

-Lest there be any doubts about the money being seen on the screen, ROP is a humungous visual undertaking. It was shocking how big the show looks. The drive-by history of the First Age battles showcases moments befitting of an IMAX theatre presentation. Amazon spent every single penny it had bringing its version of Middle Earth to life.

–Tolkien geek alerts: The Trees that brighten Valar get a cameo. Telperion and Laurelin are both in the background of the premiere’s earliest shots.

Keep a watchful eye out for the Ents making a “blink and you miss it” appearance near the end of the episode during a nighttime sequence.

Those hoping for some truly dastardly imagery of the First Age may be disappointed, others relieved. Morgoth is never seen very clearly. His terrifying and tenuous ally Ungoliant is neither seen nor mentioned. Given the shape that the monster takes, arachnophobes can rest easy.

It looks like Elrond and the great Elvin forger Celebrimbor will be working on a project that goes oh so terribly wrong by the time the Second Age ends. Time will tell.