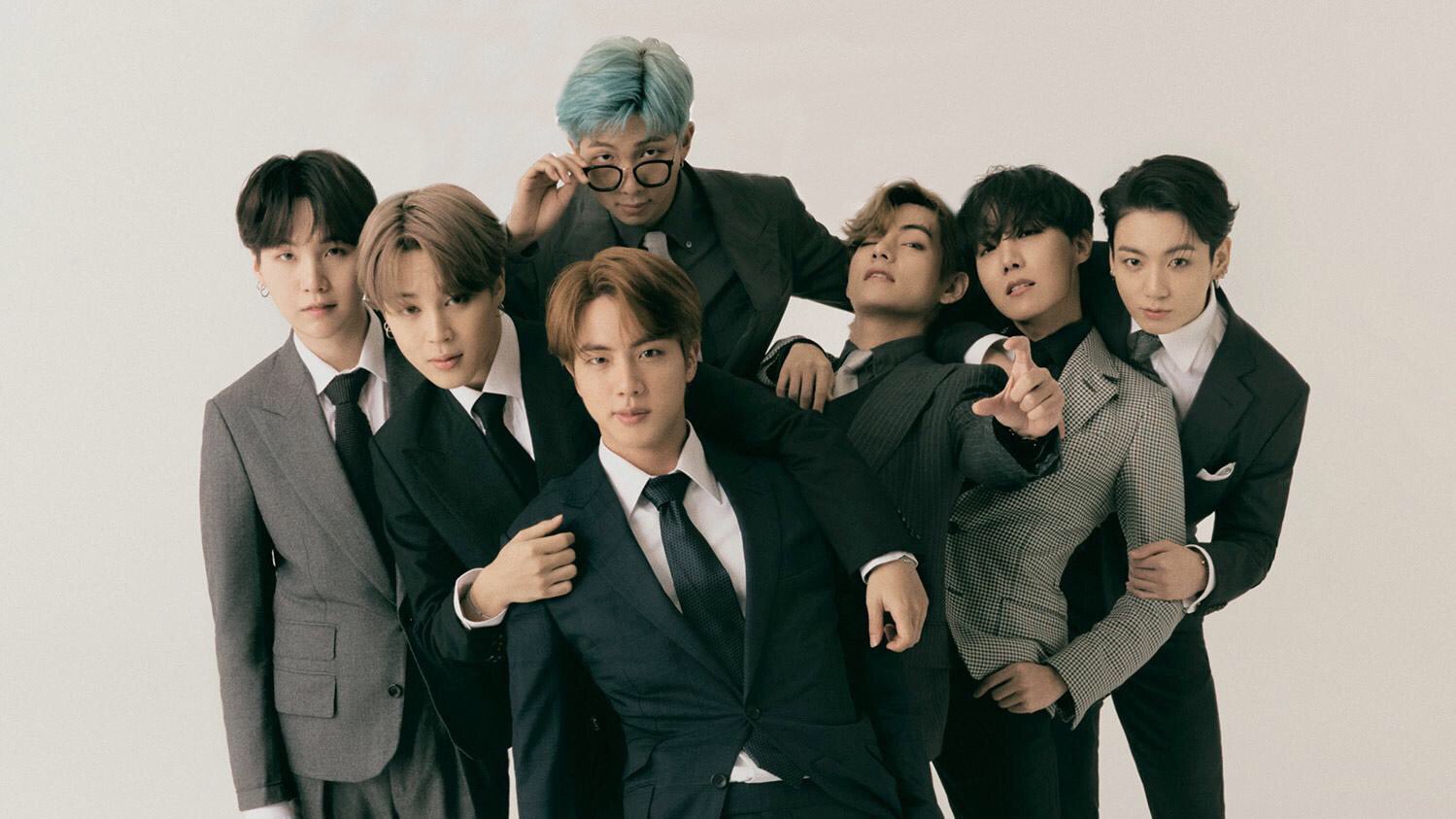 Hello and welcome to your weekly dose of BTS news with me, your intrepid reporter who is not actually affiliated with the band in anyway despite my best attempts. As I write this, I must admit that I haven’t managed to think of a suitable title for today’s article (though I sincerely hope that I will have thought of one by the time you read this). Why you ask? Because in the last week or so since I wrote about BTS last, the Korean group have managed to break even more records and make history in the music industry. Again. So let’s take a look at what the band managed to achieve in the past few days alone.

If you’re a frequenter of my BTS articles (I hope there is at least one of you or else I should probably stop talking to myself) then you may remember that a few weeks ago, I mentioned that if the bands disco pop track “Dynamite” managed to stay another two weeks at the top of the Billboard Digital Sales Chart then it would break a hugely impressive record:  the longest running number one. Well, you can probably guess where I am going with this. They only went and did it. “Dynamite” has officially broken this record after a whopping eighteen weeks at the top of the digital chart. This beats the previous record holder- Luis Fonsi’s “Despacito”- which managed seventeen weeks at the top. The song has been insanely popular since its release last August- breaking all sorts of records alongside this one- so it is no surprise that the funky tune held strong for another two weeks to make Billboard history.

“Dynamite” also managed to break the seven year record of the longest charting song on the Billboard Hot 100 by a Korean act from a tune that is something of a staple in pop culture history. “Gangnam Style”- a K-pop dance track by fellow South Korean singer PSY- was so iconic when it released back in 2012 (yes, that was almost a decade ago. I feel so old) that it broke tons of records, becoming the most viewed and liked video on YouTube as well as the first YouTube video to hit one billion and then two billion views. “Gangnam Style” is likely to be remembered as a highly influential song and for good reason, but “Dynamite” has swiped its title of longest charting song from a Korean act which I think suggests that BTS’s pop track has also had a cultural impact in its own way. Though this doesn’t take anything away from the achievements of PSY, this is a huge accomplishment for BTS due to the sheer popularity and worldwide knowledge of the infamous “Gangnam Style”.

Another huge achievement for the Bangtan Boys is the recent announcement that they have become the first Asian act in history to surpass sixteen billion streams across on Spotify. Sixteen billion. That’s more than double than the amount of people there are on this planet. Let that sink in for a moment. That also makes them the most streamed group of all time across both Spotify and YouTube. Damn.

According to the Twitter account @BTSPublicity– who provide information on BTS’s ever growing list of broken records and promote the band- the group is now the only act in music history to have seven songs with one hundred number ones on iTunes.

RM Makes History All By Himself

BTS’s leader and only fluent English speaker Kim Namjoon- otherwise known by his stage name RM- has broken a record by himself too as well as with his bandmates. RM is now the only artist in music history to have an album top the charts in one hundred and twenty one countries with his solo mixtape from 2018, mono. The mixtape (which is really good and I’d advise having a listen if you haven’t already) recently made it to number one in Dominica, leading to the broken record. I think this shows that the band is just as popular in their own musical ventures as they are together. BTS may be the brand and the name that rakes in the views but underneath the fame and glamour, they are all incredibly talented musicians and artists who are capable of serious musical undertakings both together and alone. Band member Kim Taehyung- a.k.a V- also made his own bit of music history recently when his solo song “Sweet Night” – from the K-drama Itaewon Class– made it to number one in eighty seven countries, breaking the record set by PSY for “Gangnam Style” yet again. Whether it’s together or alone, these boys are clearly talented and capable enough to keep tackling the music industry.

“Film Out” Tops the Charts Worldwide

Still not had enough? Well the group’s most recent song- a Japanese song called “Film Out”- has already surpassed sixty million views on YouTube despite only being released last Thursday. Not only that, the song is topping charts across the globe. According to Soompi.com, the song has reached the number one spot in at least 97 regions worldwide. The song also set a record in terms of BTS’s Japanese songs, garnering almost thirty million views in 24 hours which is the highest view count for one of their Japanese tunes within a day. Being able to get a Japanese song from a Korean band to number one around the world is absolutely amazing and a true testament to their strength and versatility as artists.

Leading on from the point about their solo endeavours, South Korean media sources suggest that the group are planning on releasing various solo mixtapes- starting with V who teased his back in a series of interviews that the group did with each other. The source- Newsen– also reported that the management agency of BTS- Big Hit Entertainment- confirmed that the group will release new music this coming May. Big Hit’s response to this was to vaguely state that they will “release artist related schedules once they are confirmed.” That’s not a straight up no though, am I right? Fans of the band who follow their music intently may already know that V is not the only confirmed member to be bringing out a solo mixtape at some point. Jungkook is also due to release one, with the working title currently being JJK1. SUGA has also dropped two solo mixtapes- Agust D and D2– but in the extended version of his BE interview with RM, he casually remarked that he had enough material to drop D3– the next addition to his solo mixtapes- right now if he wanted to. Min Yoongi, you are such a tease. Both j-hope and RM have had solo mixtapes too whilst Jimin and Jin have released solo songs that they have worked on behind the scenes- actively contributing to writing and production- so it’s entirely possible they could have something in the works. I wouldn’t be surprised if someone’s mixtape was dropped in the next few months; neither would I be shocked if the group were able to release another new song soon. With the global pandemic bringing about the cancellation of their tour and concerts, the band have probably had a lot of free time to work on as much music as they want. I hope they have more to show us soon.

As you can see, these boys are breaking records in the same way that we mere mortals break our eggs for breakfast. They are truly becoming the most iconic band of our generation and I only hope that they are able to continue this insane streak of success. They are genuinely talented artists who clearly care about music and performing. Their achievements are entirely deserved, coming off the back of hard graft, teamwork, perseverance and talent with a hint of luck thrown in for good measure. They have faced their fair share of racism and bigotry along the way due to being Asian (god forbid someone who isn’t English speaking be a success!) but their inspirational nature, passion and positivity through their music is more than enough to quell the hateful words of the ignorant. You don’t have to like them or their music but you cannot logically deny that they have not done astounding things, succeeding in style in both the east and the west and doing incredibly well for an Asian group attempting to traverse the western music industry. Not bad for a group of seven boys who only wanted to indulge their passion for music and perhaps have a chance at a mere fraction of the success they have attained. I look forward to following BTS on their continuing journey. As long as they keep going, I’ll keep writing on them.

What’s All the Fuss with Powerpuff ?: A Look at The CW’s Upcoming Live Action Powerpuff Girls Show