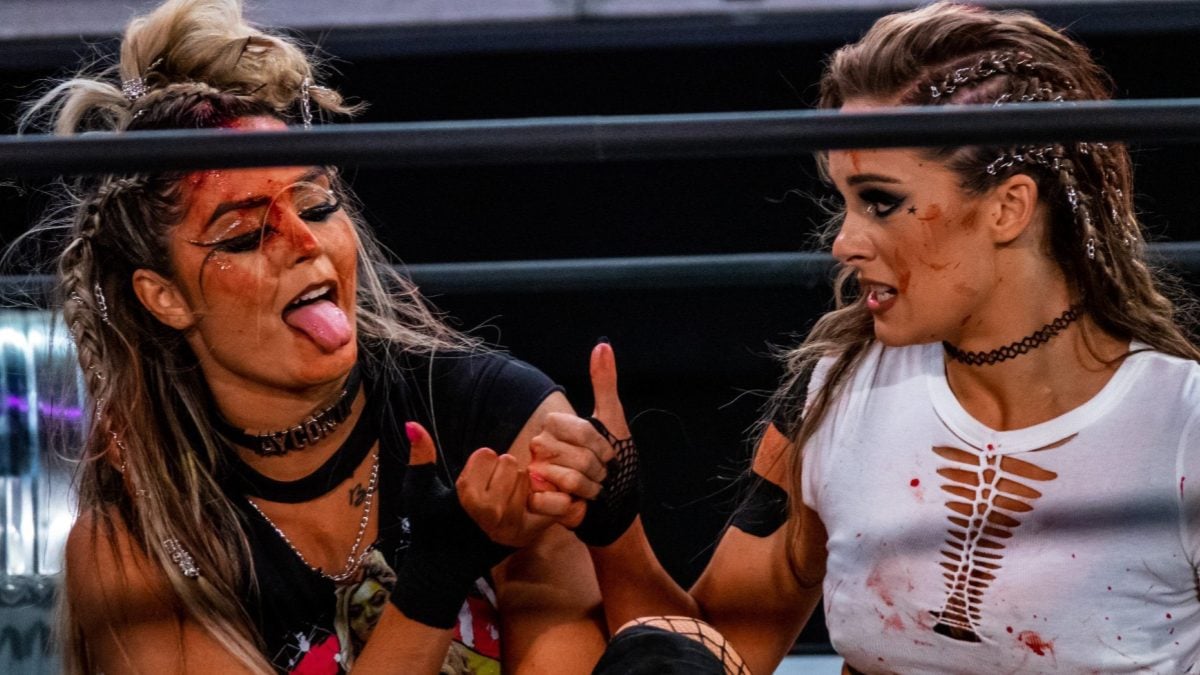 AEW Rampage has the obvious factors that differentiate it from Dynamite, most significantly its pre-taped format (as opposed to live Dynamites), as well as its compact 1-hour runtime (as opposed to 2-hour Dynamites). But Rampage has been and continues to be, met with criticisms about its less “consequential” product, with many pointing to its very format (taped, 1-hour) as the reason why it not as essential as its live counterpart.

One of the more significant ways to demarcate Rampage from Dynamite would be to have certain titles be defended on one show, and not the other. Dynamite, as the original program, could claim the World, Women’s World, and World Tag Team Championships, or the promotion’s “core” or foundational titles. Rampage then could lay claim to the All-Atlantic, World Trios, FTW, and other non-AEW Championships (e.g. ROH, AAA, etc), or the titles that represent the expansion of AEW.

Where it might get tricky is with the two TV championships, the TNT and TBS titles. On the one hand, Rampage could simply take the TNT belt and Dynamite the TBS belt, to represent the channels either show respectively airs on. But this would leave both AEW women’s championships to be defended on Dynamite, which (until a third women’s championship arrives) is a disservice to Rampage and to the entire division that, for some reason, has to live on 1 match and 1 segment (max.) on Dynamite.

Of course, as with most ideas on this list, the key is for exclusive to be a “soft” exclusive. Some of these championships, like the TBS and ROH World titles, have already had history being primarily defended on Rampage, and perhaps a further commitment to the pattern is one way to develop a relationship with the show.

In keeping with the point regarding “soft” exclusive titles for either show, some titles can take on the identity of open challenge belts, which can be another intriguing Rampage staple. The origins of the TNT Championship centered around regular, if not weekly, open challenges for inaugural champion Cody Rhodes. The same principle would be adopted by undefeated and inaugural TBS Champion Jade Cargill. Upon being captured by Hook, the FTW Championship would also be marketed as an open challenge belt.

Since the launch of Rampage in August 2021, many of these open challenge defenses have been scheduled for the 2nd AEW program. The brand new World Trios title, while not much has been seen from it yet, can serve as the open challenge belt for the tag team division, which has not been afforded such a thing to date. And even away from the title scene, Serena Deeb’s “5-Minute Rookie Challenge” sets a good open challenge template for non-champions who wish to ascend the rankings, as well as for a string of unsigned/unranked talent to appear on AEW television.

One of the ways Rampage is already unique from Dynamite is Mark Henry’s trademark interview segment before the main event. While there is a throwback charm to these segments (as well as an all-time exchange with Orange Cassidy), more and more people have been cutting Henry off before a question is asked, presumably due to the palpable tension and energy before a main event. Henry’s best work in the role has also come with more light-hearted matches, such as Orange Cassidy v Ari Daivari, which is a limited pool to swim in.

In my estimation, fans appreciate the effort to make Rampage main events feel bigger, as well as the avenue for guaranteed promos from their favorite wrestlers. But if that ‘big Rampage main event’ feeling isn’t coming from booking matches of greater consequence — it should — then Mark Henry’s segment may need to be tweaked to take up less time, and his interview prompts need to pack a tighter punch.

(4) Vehicle for new and unranked talent

There once was a string of Rampage episodes wherein new signees Bryan Danielson, Adam Cole, and CM Punk would be the top featured stars, either opening or closing episodes and steadily amassing win streaks against lower-card or unranked wrestlers like Colt Cabana, John Silver, Daniel Garcia, and others.

Danielson and Cole’s case wouldn’t necessarily be Rampage-exclusive (with both men officially debuting on Dynamite), but this is a template that can definitely be utilized moving forward to showcase new signees coming in, regardless of popularity. The Trustbusters have done it, Keith Lee and Swerve Strickland have done it, and the August 2021 brigade has done it.

Prominent talent, in general, can rack up wins on Rampage, whereas Dynamite can more consistently promote championship eliminator matches, Top 5 v Top 5 matches, and wrestlers coming off of big PPV stories. Perhaps by featuring prominent talent and having new names make their in-ring debuts and amass wins on Rampage, it can communicate to fans that it’s a show to watch for different reasons than Dynamite.

The show has been home to many of AEW’s more underrated, “gimmick” matches. While Dynamite has flaunted Blood and Guts, Ladder matches, and flaming tables; Rampage has been home to stipulations like the double-ring battle royal called the Royal Rampage, and a gory display of self-mutilation from a women’s tag team Tables match. This is not to put either set on a pedestal, but to highlight the more under-the-radar, insane gems that Rampage has put on.

Eddie Kingston, Santana, and Ortiz v Daniel Garcia and 2.0 kicked off 2022 with a terrific ECW-style street fight in January, which was meant to be a No DQ rematch between the same teams from a month prior.

A week prior at Rampage: New Year’s Smash 2021, Anna Jay and Tay Conti v Penelope Ford and The Bunny out of nowhere had one of the most well-received women’s matches and bloodbaths in AEW, for a match that received really little to no build prior.

One of the greatest matches in Rampage history thus far does not fall under No DQ or stipulation matches, but the bloody Jon Moxley v Wheeler Yuta in April 2022 was a star-making night for Blackpool Combat Club’s 1st recruit. Tony Khan tends to promote these bloody episodes of Rampage by going nuts on Twitter, and rarely have they ever missed. Blood, obviously, is not a factor in pro wrestling that can just be barred at will, but if these dangerous, experimental matches can keep being reserved for Rampage for the most part, then it won’t have much trouble being its own unique entity.

The Best Matches in SummerSlam History