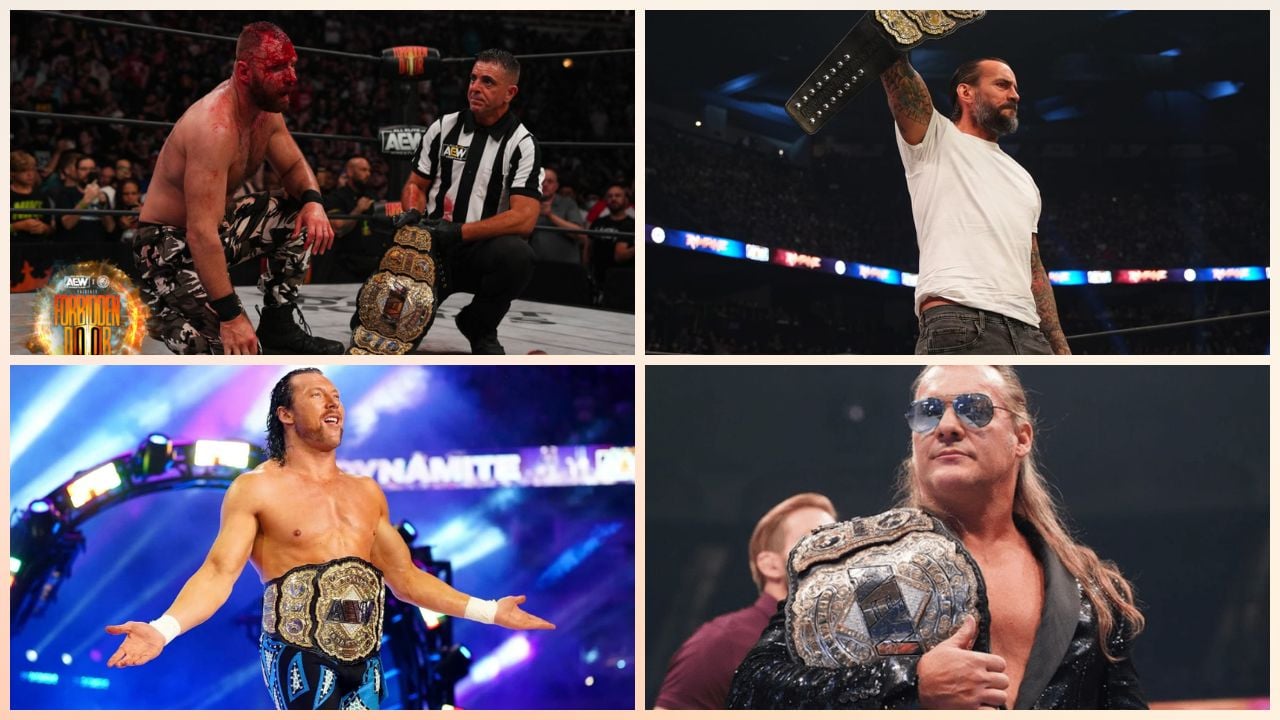 Following a memorable All Out 2022, the first wave of AEW World Champions is etched in stone. The first era of the pay-per-view main event scene is (forcibly or otherwise) over and done with, already complete with a history of classic battles, title vacancy, and behind-the-scenes controversy to its name. Without further ado, let’s go through what the inaugural five World Champions brought to the title and rank them.

The comeback story was historic. He returned to pro wrestling after 7 years, brought a lot of new eyes to AEW, and broke PPV records. Then he wins the World title; breaks his foot attempting a stage dive onto fans. He comes back; drops the unification bout in 3 minutes. He wins the title back in a rematch, where he tears his triceps. He gets himself suspended. Like the pro wrestling “journalism” he vehemently denounced:

Adam Page’s World Championship reign was on par with that of Chris Jericho. In some ways, like his entire journey toward attaining his confidence and ultimately winning the title from Kenny Omega, “The Hangman” has Jericho beat. But Page, through no fault of his own, sits at a lower spot for 2 reasons: the rematch-heavy halted nature of his reign as a whole, as well as his inconsistent presence on TV.

Having a series with Bryan Danielson is one thing, but having to face Adam Cole time and time again, where every match felt like a conclusive decision, led to a feeling that Page’s title reign was being halted for something or someone. Of course, Page isn’t cutting weekly promos like Jericho, but opening/closing shows (at the very least), and a rebuilding of his unofficial home faction Dark Order would’ve been nice.

The tangible thing Chris Jericho’s reign had on Adam Page’s was the diverse material that the former had. As inaugural World Champion, the leader of the Inner Circle was mixing it up with AEW’s promising young talent, fellow champions, and other established names, most notable of those matches being against Cody Rhodes at Full Gear 2019, with the infamous stipulation that exiled Rhodes’ from the World title scene.

An intangible, however, was that World title storylines just felt larger with Jericho on weekly tv, particularly that “Where’s my thank you!” version of Jericho, which is what the brand new title needed. Quite simply, he was just the right champion for the time.

As much as it can be seen as a year-long journey with Adam Page, Kenny Omega’s World Championship reign was one highlighted by big-time matches. In many ways, Omega was the quintessential AEW World Champion: he could be relied on for the highest of in-ring highs, as well as key moments and stories that elevate World titles.

Omega’s defenses against Rey Fénix, Jungle Boy, and Christian Cage stand out as among Omega’s most exciting and dynamic as the “Belt Collector,” holding onto the AAA Mega and Impact World Championships on top of AEW gold. However, undoubtedly the biggest match to have come from this reign was a non-title match against a debuting Bryan Danielson at Dynamite: Grand Slam 2021, which was 30 minutes of stellar action full of resounding strikes and high-impact throws.

Still, all of these would not hold emotional weight and gravity to match that of Omega’s encounters with Page, from in-ring promos, to multi man tag matches, to the final match at Full Gear 2021, in the aftermath of which Omega proved with his absence just how important he was.

There is some chatter online about who the “Ace” of AEW is. Some point to the relatable “Anxious Millennial Cowboy” Adam Page. Some point to the “Best Bout Machine” Kenny Omega. I remember some pointing to Cody Rhodes, once upon a time.

But perhaps, as of the time of writing, the man with the best case for “Ace” is a man who is reserved about his deepest reservations; a man who fights with less grace than a one-winged angel; a man who enters the ring to an explosive chorus: Jon Moxley.

Moxley has stepped up and led the entire main event scene as World Champion on two distinct occasions: the 1st being through the first, no doubt toughest year of the pandemic in 2020, and the 2nd being in a period of roster depletion thanks to a plague of injuries in June 2022, (albeit as an interim champion for about 2 months of the reign). From Mr. Brodie Lee, to “The Ace” Hiroshi Tanahashi, to CM Punk: every name Moxley fended off only cemented him as the ever-durable, ever-reliable, ever-professional, and true neutral center of AEW.

Moxley is a workhorse with classics to his name, knows how to use a microphone, and stays off of social media. The AEW World Championship is just a possession. What it represents passes through Moxley’s skin, pores, and blood cells:

The Best Matches in SummerSlam History

The 10 Best Hell in a Cell Matches