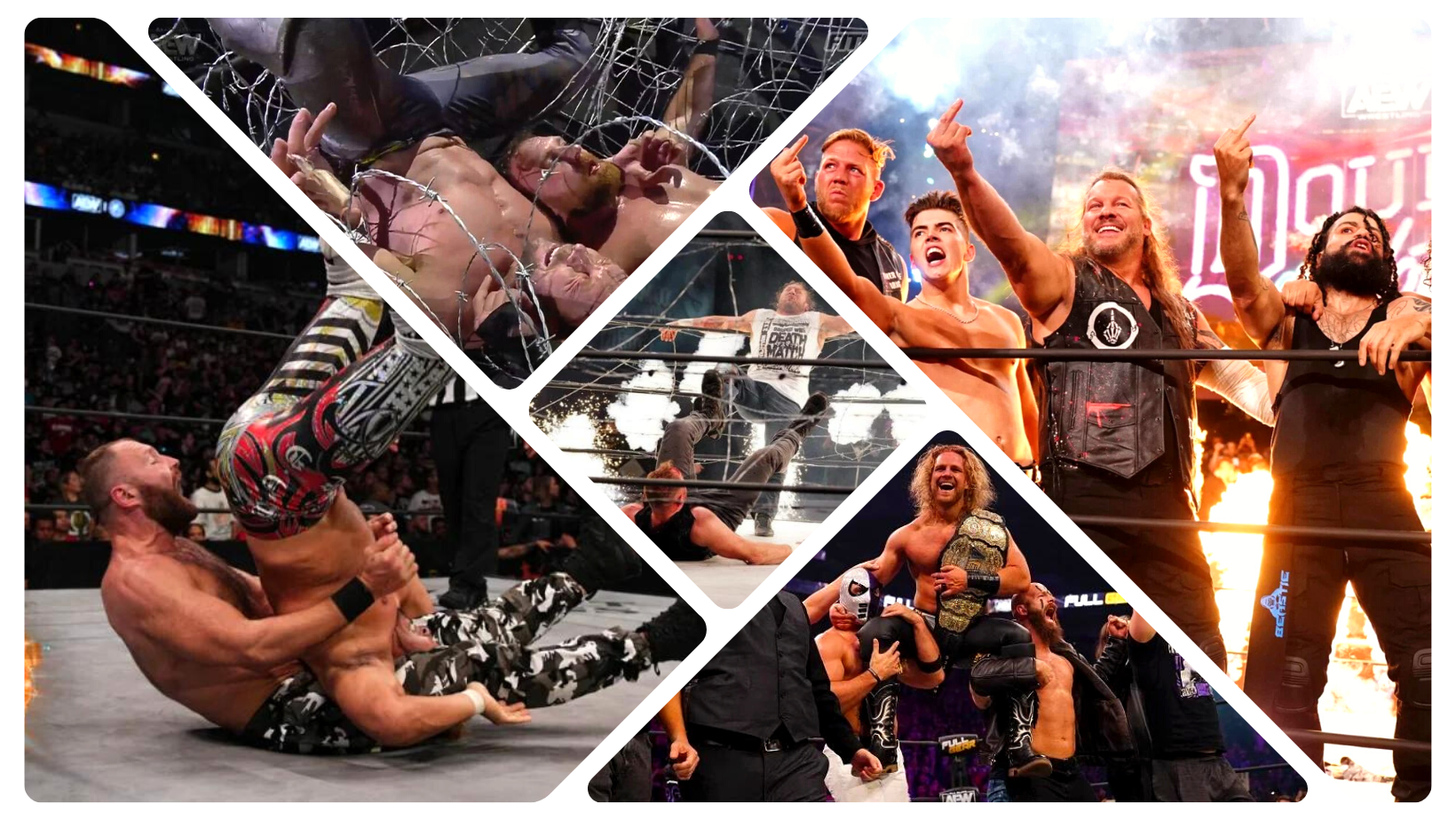 In spite of newer booking philosophies emphasizing the importance of the opening match (reflected by AEW’s frequent power openers on both TV and PPV), the main event spot still holds the same prestige it always did. It is the spot on any card most wrestlers boast about being in, as the ending to any show can help make or break fans’ experience.

AEW’s PPV main events have seen a lot of memorable, varied matches from heartfelt World title fights, to cross-promotional dream matches, to battles in an empty stadium. Which of these matches is the ultimate main-eventer?

It’s really unfortunate, but really true, how a wonky ending can warp all the great perceptions of a terrific performance. This match is AEW’s most prominent victim of that reality. Kenny Omega and Jon Moxley had great build and anticipation for their Exploding Barbed Wire Deathmatch, and even got fans in online communities checking out classic Japanese exploding barbed wire matches in preparation for it like we were all going to war ourselves.

Omega and Moxley’s chemistry even outside of the barbed wire entrapments was gripping, and the dangerous environment helped heighten tension, but never felt like it was leaned upon for “drama.” It’s just that ending, really; and that when you put exploding in the title, people tend to expect an explosion.

(5) The Inner Circle v The Pinnacle

(Stadium Stampede, Double or Nothing 2021)

From one divisive match to another, we go onto the pandemic cinematic special known as Stadium Stampede 2021: the Inner Circle versus The Pinnacle. I’ve sung the highest of praises before about 2022’s Anarchy in the Arena, but while its predecessor was certainly no Anarchy, it’s at least great to know that every subsequent iteration of the concept was better than the last.

Some liken this match to the experience of watching pro wrestling during the pandemic, juxtaposed with a return to live action about 3/4 of the way through the match. Others find it perplexing that a (mostly) cinematic match was booked to main event AEW’s first full-capacity event in over a year. Personally, I find the second Stadium Stampede to be a somewhat more compact version of the original. And while the 2020 version did feature Adam Page riding a horse, the way the 2021 match transitioned to the live crowd in its final act just felt right.

Stadium Stampede was wackiness, brutality, and through it all, a levity in times when it was really needed, and with some hindsight, that match definitely earned that main event spot for the ending alone.

Of course, the main event in spirit, the story people talked about the most, from All Out 2021 was the double debut of Adam Cole and Bryan Danielson immediately following the World title main event. And you could say, ‘well, those were never part of the card,’ and so the main event, as advertised, saw Kenny Omega (c) v Christian Cage for the World title.

While the chemistry between Omega and Cage was smooth (to the surprise of no one), what held the bout back had more to do with the build-up than anything else, really. The biggest evidence of this might be the pair’s 1st match a month earlier, an Impact World title match on the debut episode of Rampage that the two fought in front of a white-hot crowd. Omega v Cage was never the problem (as there was great interest in it); it’s that they already gave this supposed PPV main event away on TV a month prior, and it was given away as the opening bout.

Couple that with the story of CM Punk’s return match to pro wrestling at All Out, as well as the rumor of Cole and Danielson possibly arriving to AEW, and this match will have been (and was) overshadowed by all these. Still, when all was said and done, and when revisited in hindsight, Omega and Cage had a fun match that anchored the entire final hour of the biggest PPV in AEW history, and a match we can all fondly look back on.

All the signs point to this match not likely to have been penciled-in for Forbidden Door; but if you asked Jon Moxley, he’d tell you that Hiroshi Tanahashi has been ducking him for years. Moxley had been calling out “The Ace” since the former held the IWGP US Heavyweight Championship, but due to a string of ill timing—the pandemic, Moxley dropping the title to Lance Archer, etc.,—the match never would take place. (Funnily enough, once Archer was US Champion, “The Ace” had no qualms immediately challenging for the belt…)

Still, it would take an unfortunate injury to World Champion CM Punk for the match to finally be scheduled for Forbidden Door: Mox v Tana. The battle between the two did not disappoint, putting forth a dirty wrestling match that saw Moxley fighting through blood in his eyes and Tanahashi fighting with all the classic moves that made him “Ace.”

This match was the right main event, both on paper and in actuality, to main event a supercard hampered by injuries, illness, and other issues: both promotions’ Aces, belt or no belt, one-on-one.

Some main events are willed into existence; some fall into our laps by some accident; some are necessary. The story of Adam Page’s journey to capturing the World Championship kicked into full gear (I’m sorry) the moment Kenny Omega’s lack of trust for Page took precedence over the fact that they were World Tag Team champions. For the longest time, Page’s insecurities with the Elite had been contained to himself and could still easily be talked through. But this admission of distrust from Omega would open the floodgates for Page to listen to his gut and want out of the Elite.

Even before then, at the first All Out in 2019, Page had had the chance to become inaugural AEW champion against Chris Jericho, but lost. These two moments served as personal motivation for Page to win the title in AEW’s big comeback year returning to touring in 2021; but Omega, now a shortcut-taking World title collector, made sure spite and a good ol’ dose of toxic tough love motivated Page, as well.

The match that resulted may have suffered to some extent by Omega’s plethora of injuries he had been working through (as he would later reveal), but in the moment, the whole point never diminished. Full Gear 2021 ended with Page finally capturing the World title from Omega (who would take go on to time off due to injuries), starting a brand new chapter in AEW.

At Full Gear 2019, Jon Moxley and Kenny Omega were tasked with main eventing the show over the World Championship match between Chris Jericho (c) and Cody Rhodes. Maybe 2019 AEW was the only time for this trend to have worked, but Moxley and Omega somehow succeeded in closing a pay-per-view in a match with no tangible stakes, over the 1st PPV defense of the promotion’s young World title.

Enter Moxley, who had had the wrestling world in the palm of his hand since his headline-grabbing debut for AEW, destroying the Double or Nothing stage using Omega’s body. A singles clash between these two beloved wrestlers that fans regarded as the best wrestlers within their own bubbles was inevitable, and had been teased since the beginning.

The Lights Out stipulation may have looked like the stakes for such a big match were lowered, but in Omega’s words to Mox:

Both men made the most of the stipulation, and wrestled a brutal match that escalated beyond imagination with glass tables, barbed wire contraptions, and an exposed ring. This match felt like the 2 most untouchable wrestlers opening a portal to the Upside Down for the first time in AEW.

Then, mercifully, they close the gate.