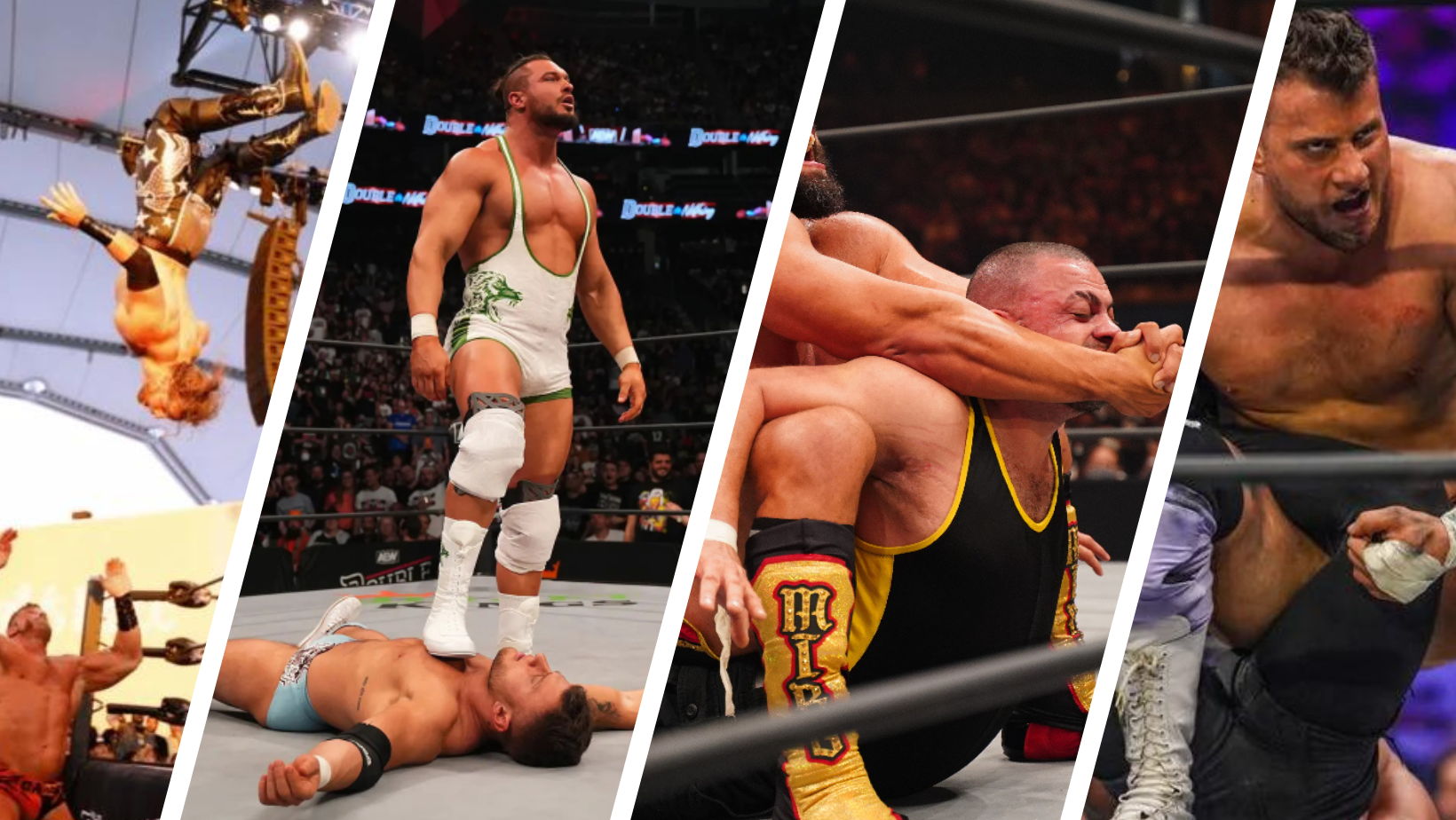 What are the best AEW PPV openers?

Main-event level openers litter every other episode of Dynamite and Rampage. Off the top of our heads, we can point to Kenny Omega v Bryan Danielson (Dynamite: Grand Slam 2021), Super Elite v Adam Page and Dark Order (Dynamite: Fight for the Fallen 2021), Kenny Omega (c) v Christian Cage (Rampage Ep. 1), and basically every episode of Rampage. On pay-per-view, however, this practice wasn’t always as commonplace, especially in the first couple of years of AEW. But more recently, these PPV opening matches have been strong match-of-the-night contenders, and have done a great job setting the atmosphere for the rest of the event.

Who is the king of PPV openers? Which matches are the standard to open shows with?

This isn’t the type of match most people associate with being a “classic match.” But it was great and necessary, given all the abuse Wardlow had gone through under his former employer, and given Wardlow’s promising career trajectory. Putting this match in the opening slot was extra effective, as right away it gave the crowd the decisive payoff to one of the biggest stories of the year, creating trust for a night of bigger things ahead.

It was definitely refreshing to have Eddie Kingston cut promos that aren’t fueled by hate. Miro had been on a dominant run as “God’s Favorite Champion,” putting down the likes of Lance Archer, Lee Johnson, and Fuego del Sol on the quest to defend the TNT title. This cold-bloodedness from the champ may have been what lead to a Kingston that approached this All Out 2021 match against Miro with more method than his usual madness.

The story of the match was that all of Kingston’s moves—DDT, saito suplex, Uraken—were targeted at Miro’s neck, which the latter’s last 2 challengers had identified to be his biggest weakness in the ring. And this simplicity, coupled with Kingston’s popularity and the success of “The Redeemer,” made for a perfect storm to start a monumental PPV.

“MJF can win with a headlock takeover.”

These two are among the most prominent young technical wrestlers in the whole promotion. What they might lack in promo chemistry, they more than made up for in the ring together. The sequences were smooth and fun to watch no matter where it ended up: in the middle of ring, to start the match, on the ring apron, or outside on the floor.

Still, you wondered about that headlock takeover. ‘MJF is either a liar, or he’s something else.’ On a night of dramatic marquee matches, this may have been the steadiest way to start the night.

Of course, as the opener to the 1st PPV back in over a year with full attendance, the live crowd was going to be red hot. But while the crowd definitely pushed this from good to elite-level, Adam Page v Brian Cage had everything going for it, to begin with.

The story heading into the match may have mostly been about the inner turmoil amongst Team Taz, but the sheer popularity and support for Adam Page is a story all on its own. The two men exchanged hard, picturesque strikes and utilized their agility to offset the other’s strength. And despite the differences in size, crowd support, and the (minor) involvement of Team Taz near the end, neither man felt like the underdog, and their evenness and chemistry really shined.

This match was a great mix of power and whatever the combat sports equivalent for gracefulness is. Overall, as the PPV match to welcome fans back to full capacity crowds, this was everything you could have asked for.

And sure, in contrast, Kingston lost every PPV match he’d had before 2022: CM Punk, Miro, Young Bucks, Jon Moxley. But just as much as Jericho taunted Kingston for having never won “the big one,” perhaps Jericho also needed Kingston to remind himself that Jericho is the big one in AEW.

“Not Moxley, not Danielson, not Punk, not the Heavyweight Champion Hangman Page. Chris Jericho is ‘the big one’ of this company!”

In the end, this thinly-veiled conflict between the two ended up being either man’s best match in AEW in many months. Jericho wanted a performance from Kingston that even Kingston—known to struggle with compliments—could be undeniably proud of. In turn, Kingston wanted the Jericho that had the respect of legend Genichiro Tenryu, and Kingston gave him a performance that would elicit that heart out of him.

And the best part is, it worked. Both men came out of that match revitalized, and everyone seemingly got what they wanted. Except, Kingston, who would be denied the handshake he was promised.

There are matches like Adam Page v Brian Cage (Double or Nothing 2021), that are everything you could ask for out of a PPV opener. Then, there’s a show like Forbidden Door. How do you open a supershow with Kazuchika Okada, Sting, and Orange Cassidy wrestling on it?

There may be a case to open with a sound technical singles match, or kick things off right away with a title match, etc. But on a show collaborating with NJPW, where card structures are more predictably set, the options have thankfully been narrowed down. And thus, we start the night off with a trios match that can main event any pro wrestling show in the world:

There are so many layers, and so many permutations in this match, that can lead to so many sequences. It cannot be done justice by being broken down. Somewhere in the halfway point of this crazy opening match, mind you, you might just end up going, “I need to f****** breathe.” This match made a star out of Umino; gave us a Kingston v Suzuki standoff; made us briefly forget our collective annoyance for Guevara; and may have, most of all, blessed us with the best AEW pay-per-view opening match, ever.