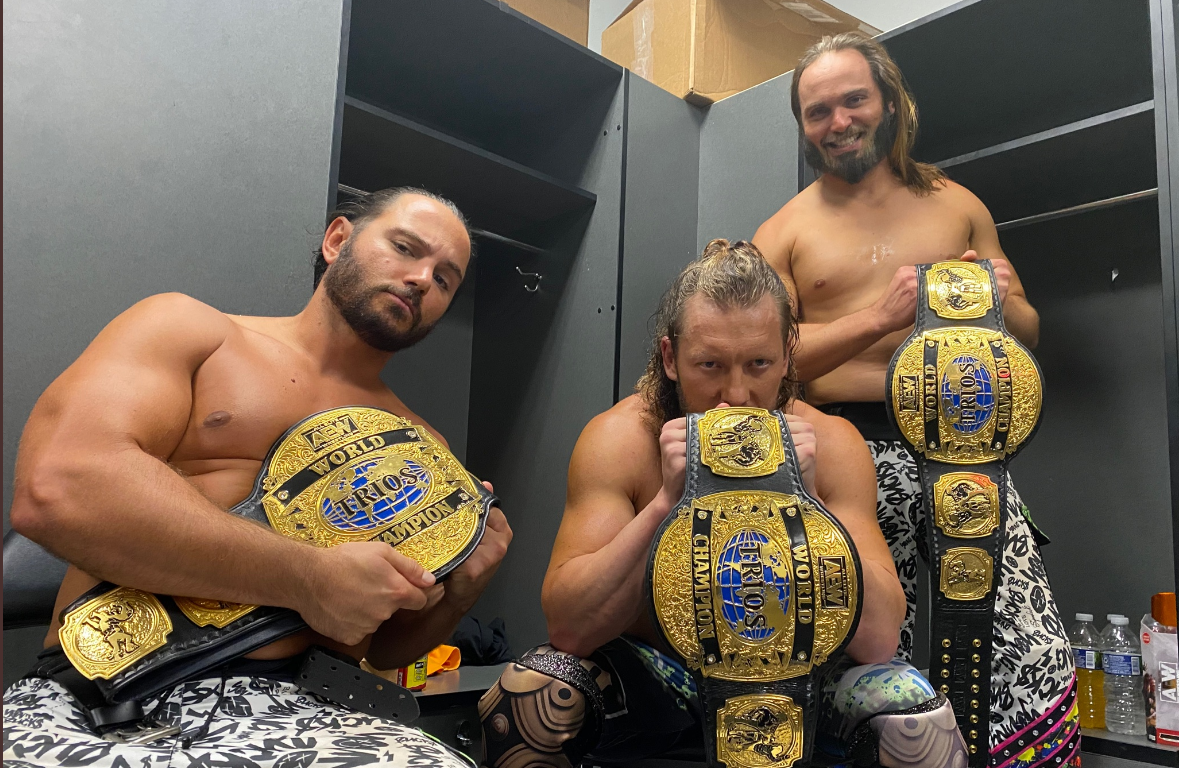 If this tournament is any indicator of what’s to come for the brand new World Trios Championship, then it’s bound to be a centerpiece of AEW. While the sage with The Elite is certainly one of the foundations of the promotion, giving us classic moments and matches alike, this tournament is just as much for the other trios robbed of their big moment, which is sure to light an impatient fire in the division.

Now, without further ado, let’s revisit the 5 best things to have come out of the AEW World Trios Championship Tournament.

With the roll the whole Best Friends faction has been on in 2022, it looked like their momentum would continue with this tournament, all the way to the finals. But to start things off, they had a compelling match against the Trustbusters.

And what a revelation the trio-now-quartet of random characters have become. This was the group that people cast aside for just being in this tournament, then they go ahead and put on this strong showing—with special mentions to Slim J, who was the team’s MVP this match, with his great sense of urgency and top rope attacks. In the same round where The Elite had their 1st match back in years, Best Friends and Trustbusters may have equaled that of The Elite v LFI.

While some aspects of the brackets may have felt more predictable due to differences in experience levels, each match-up definitely earned a second look when larger stories were considered.

We didn’t know for sure when or why Miro would show his face to House of Black again. There was the whole deal with which 3 members would represent Dark Order, with speculation as to Adam Page’s involvement even as the final line-up had already advanced to the semis. United Empire and Death Triangle was a toss-up on paper, but the possibility of Will Ospreay and Kenny Omega meeting in the following round had people quietly rooting for the NJPW team.

Overall, there was enough happening on TV to warrant investment in each round, and distrust in a clear path to All Out.

On paper, it’s a predictable match just going by the team with a proper name and more former champions in it. But matches like this tournament final at All Out are the reason why pro wrestling really is the main attraction at the end of the day.

One could argue this tournament became too Elite-centric, but the efforts of all the participants in this match were exceeded only by their chemistry. Dark Order had long stretches of exciting exchanges against the Young Bucks that make you wonder why it took them so long to face the Bucks on PPV. And the people are still on fire for Kenny Omega and Adam Page, no doubt renewing a rivalry that is emotionally charged with or without titles.

With passion bleeding through the opening and closing bells; this is how prestige is built.

Whether or not you let tabloids and rumors color your enjoyment of pro wrestling, the rivalry between Kenny Omega and Will Ospreay finally being kickstarted is a big deal. As one of the gaijin “successors” of Omega once he had left NJPW, Ospreay and his accomplishments were inevitably going to be linked back to the leader of The Elite.

If we were to go down that road, the two have each won the top NJPW belt during their time, main-evented many major shows, and had longstanding rivalries with “The Rainmaker” Kazuchika Okada. During their runs at the top of NJPW, they have each been in the conversation for best wrestler in the world.

While behind-the-scenes drama delayed this meeting between the two by years, the fact is that it did end up happening through this trios tournament, and this just opened the floodgates. An Omega v Ospreay singles match is going to elevate the partnership between AEW and NJPW because wherever it happens, spectacles like it are what fans and promoters dream about.

Kenny Omega’s near 300-day absence since dropping the AEW World Championship at Full Gear 2021 was certainly felt. Some fans even say post-Omega AEW was the beginning of a different era in the promotion.

Not only was this return big because he was sorely missed, but Omega returning specifically for the trio’s tournament immediately builds prestige for the World Trios Championship before inaugural champions are even crowned, and (next to the Trios Championship itself) is really the biggest thing to come from this whole series.

Omega’s return filled a void within AEW, both tangible and intangible. And him teaming with his regular partners, the Young Bucks, to establish a deeper tag division in AEW, is the cherry on top that is (forgive me) too sweet.

Top 5 Reasons Why the AEW World Trios Championship Will Succeed