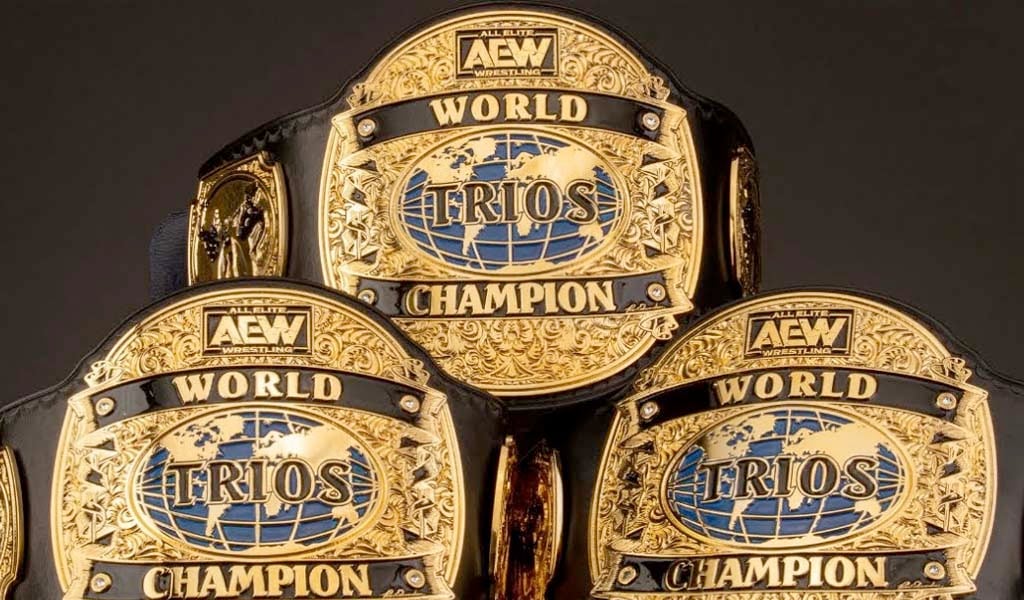 A Look at the AEW World Trios Championship

Fans have been clamoring for it for years.

The one championship that fans have been manifesting and patiently speculating about has finally been established in Year 4: the AEW World Trios Championship has arrived.

With the stacked AEW men’s roster off of the 2021 expansion, the Trios title, one could say, has definitely earned its way to the championship catalogue. In this list, we take a look at the 5 biggest reasons to be optimistic about the World Trios Championship, and why it’s destined to succeed.

The introduction of the AEW World Trios Championship is a great look and victory for tag team wrestling on a global scale. It validates a major tag team division that is so well-represented, that a trios division is not only recognized with W/L records, but with its own championship.

This title also creates depth within the AEW tag division. Its existence ensures that tag teams aren’t just stuck in limbo after losing a title match and have some kind of space to move around outside of 1 title, which adds layers and dimensions to the division.

(4) The Trios Championship Is Flexible

The Trios title may be the perfect title to defend anywhere.

That is to say, on any show: whether live, taped, PPV, or even on Dark shows, which frequently feature trios and multi-person matches anyway. It’s tough to say, ‘no one would bat an eye at this particular title being cast aside,’ because people find a way to do that. But being able to appear on any show while maintaining your essence is barely a bad thing (case in point: Best Friends, Lucha Brothers, House of Black). The reason the title can go on any show is that it can be the open challenge belt for the tag division, but with the added bonus of potentially elevating triple the amount of wrestlers at a time.

That is to also mean, in any slot: whether opening match, main event, semi-main, or Buy-In. Let the Trios title start nights off strong, or let them be the final spectacle of the evening, or let them break up a singles-heavy hour of PPV. Wild trios and multi-person bouts are among AEW’s most consistent and reliable strengths; any spot on the card can belong to the trios.

(3) The Trios Championship Is Sustainable

The sustainability of the Trios title is pretty much due to the prominence of factions in AEW.

Here is a quick list of AEW’s main event factions, or those with main event-level talent: Best Friends, House of Black, Death Triangle, Blackpool Combat Club, Jericho Appreciation Society, any variation of The Elite. Any of these factions, on a good night, can be viable challengers to dominate the trios division. Not to mention that the Trios title opens the door for irregular or otherwise odd combinations to have some success, like The Acclaimed and Danhausen, and FTR and Danhausen, and…

Simply put, the Trios title was created because the promotion is anchored by factions. It is a natural conclusion to the AEW structure; and so, on top of its flexibility with regard to its spot on the card, the World Trios Championship also boasts sustainability thanks to its strong, varied field of challengers.

Once AEW had had its foundational titles; AEW World, Women’s World, World Tag Team, and arguably the TNT Championship (est. 2020); fans would wonder and muse on online threads about what titles they’d like to see added to the list in the future. The Trios championship would always be brought up in those casual discussions, but with the caveat of, ‘not yet,’ or ‘maybe down the line.’

While it would take some time (with the TBS and All-Atlantic Championships beating it to the punch), those fans who wondered and mused would finally get their wish in August of 2022, with the inaugural trios tournament (which featured the long-awaited return of Kenny Omega) to crown the 1st AEW World Trios Champions.

With the 2021 AEW boom, and the number of available titles having now doubled since Year 1, the World Trios Championship serves as the prettiest of bows atop this gift that keeps on giving.

The #1 reason why the World Trios Championship will succeed is quite simply The Elite.

The Young Bucks and Kenny Omega have felt the immense success of being in a popular faction, let alone trio, for years in New Japan Pro Wrestling’s Bullet Club, before branching off on their own. Then, as The Elite, the trio diligently built their brand with the Being The Elite YouTube show, which somehow someway snowballed into what we know today as All Elite Wrestling.

Though The Elite faction would grow, and what began as a travel/behind-the-scenes vlog would morph into a show with its own bits, storylines, and payoffs in the ring; fans know that The Elite always began as — and still means — Young Bucks and Kenny Omega. One of the most influential tag teams, and one of the most influential singles wrestlers of the 2010’s, teaming together is what started all this. Of course, tag team wrestling will be cared for.

Of course, this will succeed.

Fight Forever: AEW Rivalries That Can Go On Forever