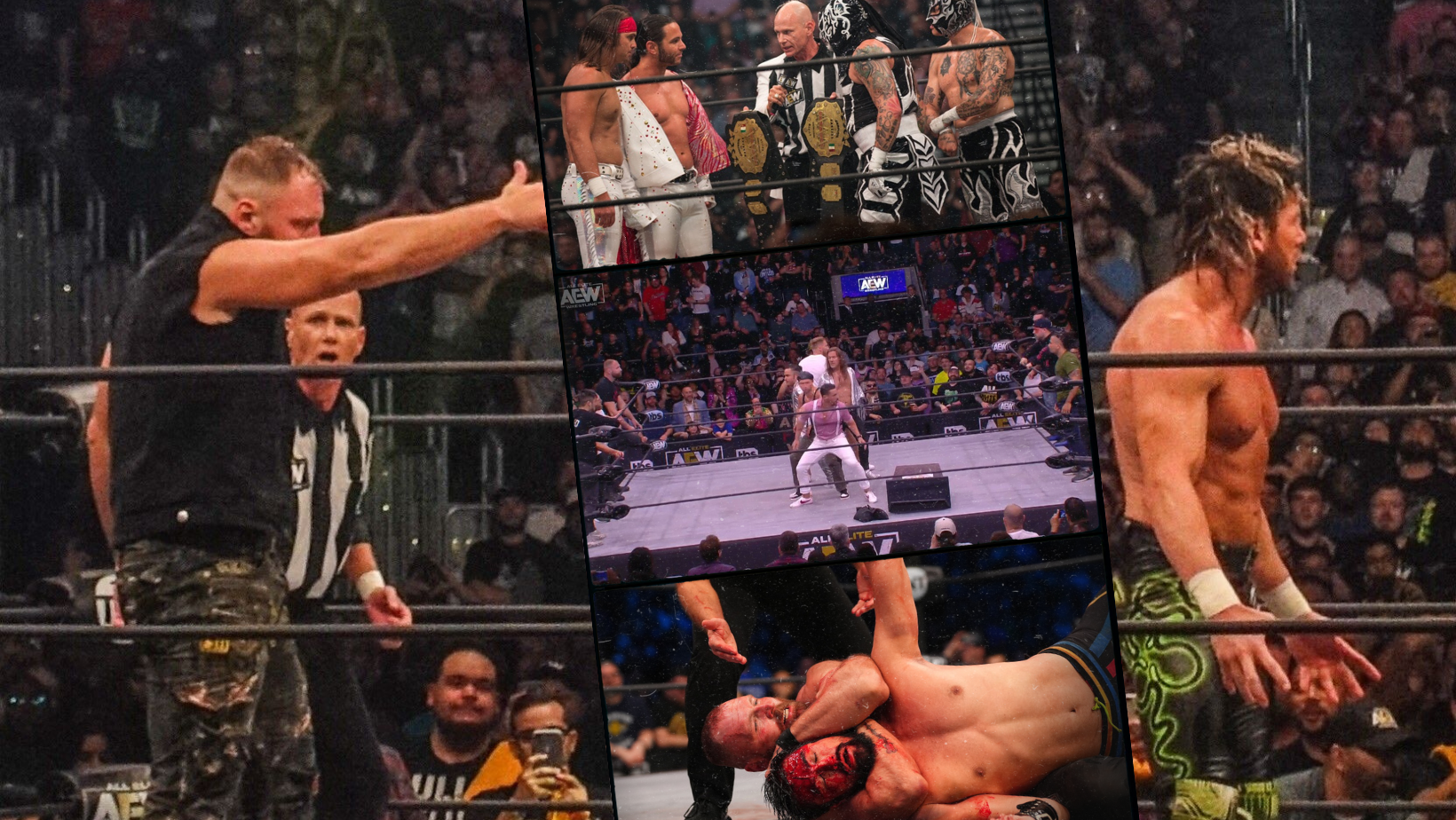 AEW’s booking method of cycling names in and out of TV for weeks at a time helps build rivalries organically, making each match feel new again by giving them room to develop. In this list, we take a look at the top rivalries that each of the promotion’s divisions (tag team, women’s, and men’s) can safely expect to last a lifetime. We will be focusing on long-standing series that culminates in the ring, without ever reaching definitive closure.

This tag team rivalry between brothers is one that’s been set up since the inaugural Double or Nothing, and has served as the foundation of AEW’s tag team division.

Young Bucks v Lucha Brothers has seen TV and PPV; title and non-title; standard tag bouts, Ladder bouts, and reached its peak in the biggest way with the classic All Out 2021 Steel Cage tornado tag. Every match of theirs feels like a big event and a big deal. Each team’s skillset and frenetic aerial style make the series a source of both comfort and excitement, serving an excellent blueprint for what a back-and-forth forever feud can look like.

From one all-time rivalry involving the Bucks to another — this time, it’s not against a team that mirrors the Bucks, but rather one that has stood for classic, ground-based tag team wrestling.

Along with the downfall of The Elite, FTR v Young Bucks was one of the major wrestling stories of 2020. Despite the success that was FTR (c) v Young Bucks (Full Gear 2020) in front of 1000 socially-distanced live fans, the promotion has largely been gun-shy about adding new chapters to this story.

And not without reason: one can probably pick up that the brother tag teams share a unique bond pulling off the crazy matches that only they can pull off. However, there doesn’t seem to be that same bond between the Bucks and FTR. More jabs during interviews; less “Oh, they’re our favorite opponents.”

Regardless, the times that they have stepped in the ring together, whether at Full Gear 2020 (AEW titles), or on Dynamite in 2022 (AAA, ROH titles), or in battle royals in between, FTR and the Bucks together create victories for mainstream tag team wrestling.

A battle of philosophies as opposite as those of William Regal’s Blackpool Combat Club and Chris Jericho’s Jericho Appreciation Society, all but ensures the two groups are destined to war forever. But not without asterisks.

BCC and JAS seem like the 2 major camps for the growth and development of the AEW roster. This means the fight between the highly-influential camps, is also free to happen within the camps; who will have to deal with members who know how to handle success, and those who do not.

With representation of pro wrestling at stake, these groups will always be at war with each other and with themselves, for as long as they can stay intact.

With 2 terrific hardcore matches over a 2-year period, Britt Baker and Thunder Rosa have etched their names in AEW as the first female rivals to have had a prominent feud that elevated the entire division.

It was the Lights Out match at Dynamite: St. Patrick’s Day Slam (2021) that arguably got Rosa signed full-time with her victory, as well as tested Baker’s tenacity to the highest level in a battleground of thumbtacks and steel chairs, granting herself the confidence — even in defeat — to beat Hikaru Shida for the World title.

On the following year’s St. Patrick’s Day Slam, the two met in a Steel Cage, this time with the stakes at its highest: Baker having now carried the World title for close to 300 days since beating Shida, and Rosa having her chance at the title without having to worry about Baker’s usual posse ringside. This second hardcore classic from these two proved Lights Out was no fluke, and both women had earned their spot at the top.

Though not every encounter they’ve had came close to their No-DQ battles, the Baker v Rosa feud is one of the division’s biggest successes, and really the only longstanding feud it’s had. I hesitate to have Hikaru Shida v Serena Deeb in this list, but deem it necessary to at least mention it. (Consider this a ghost entry.) Every match in their series showcased great counter wrestling, but it seems as though the two are better when they’re together rather than apart, as when either woman would have the upper hand, they wouldn’t go on to win other big matches, either.

Jon Moxley may just be the king of longstanding feuds, having never really closed the book on any of his myriad of AEW stories (of which there’ve been a lot). From fleshed out stories with Chris Jericho and Bryan Danielson, to imminent troubles with Adam Page, Moxley may have a solid case for being the cold, neutral center of the entire promotion.

Still, his most compelling series has come at the hands of his now protégé in the Blackpool Combat Club, Wheeler Yuta. While acknowledging that Mox v Yuta 1 and 2 were nothing to write home about bell-to-bell (Moxley straight-up ending Yuta in under a minute in their 1st encounter), their 3rd encounter tied the whole trilogy together so well, with a 2022 Match of the Year contender and a career-making performance from Yuta.

It’s rivalries like these, more-so than with Danielson etc., that best show Moxley’s elite status in the industry. Sure, he can wrestle with the big names to sell out a crowd, but the truth is he can wrestle with anybody and achieve the same main-event level performance if his opponent is up for it. I know Yuta will be the most ‘up for it,’ for the longest.

Second to Moxley’s feud with Yuta is the one with Kenny Omega. Every single meeting between these two has felt big: be it tag matches, extended brawls to close out PPVs, or explosive World title bouts. Omega and Moxley together guaranteed a Godzilla vs. Kong type of clash bell-to-bell.

Even at its most underwhelming, lowest points; such as the sparkling deathmatch (Revolution 2021); or the shocking (I guess?) presence of Don Callis and a microphone shot that led to Omega winning the World title off Moxley (Dynamite: Winter Is Coming 2020); we as fans still recognize that Omega and Moxley take care of business better than most with the fluff turned off.

These two may each have different priorities today than they did in early 2021, and may no longer be as dedicated to proving their dominance over the other. But Omega and Moxley together represent O.G. AEW, and it will only be fitting that their stories always be open and linked.

Of course, by sheer size of AEW’s primary division, there are many other rivalries with the potential to fit this mold, e.g. the aforementioned Danielson v Garcia, Eddie Kingston v CM Punk, or even any of the so-called young “pillars” fighting each other. However, much of them have yet to be properly established with factors like time, number of matches, stakes, and others.

Forever is a long time; no rush.

Top 5 Reasons Why the AEW World Trios Championship Will Succeed