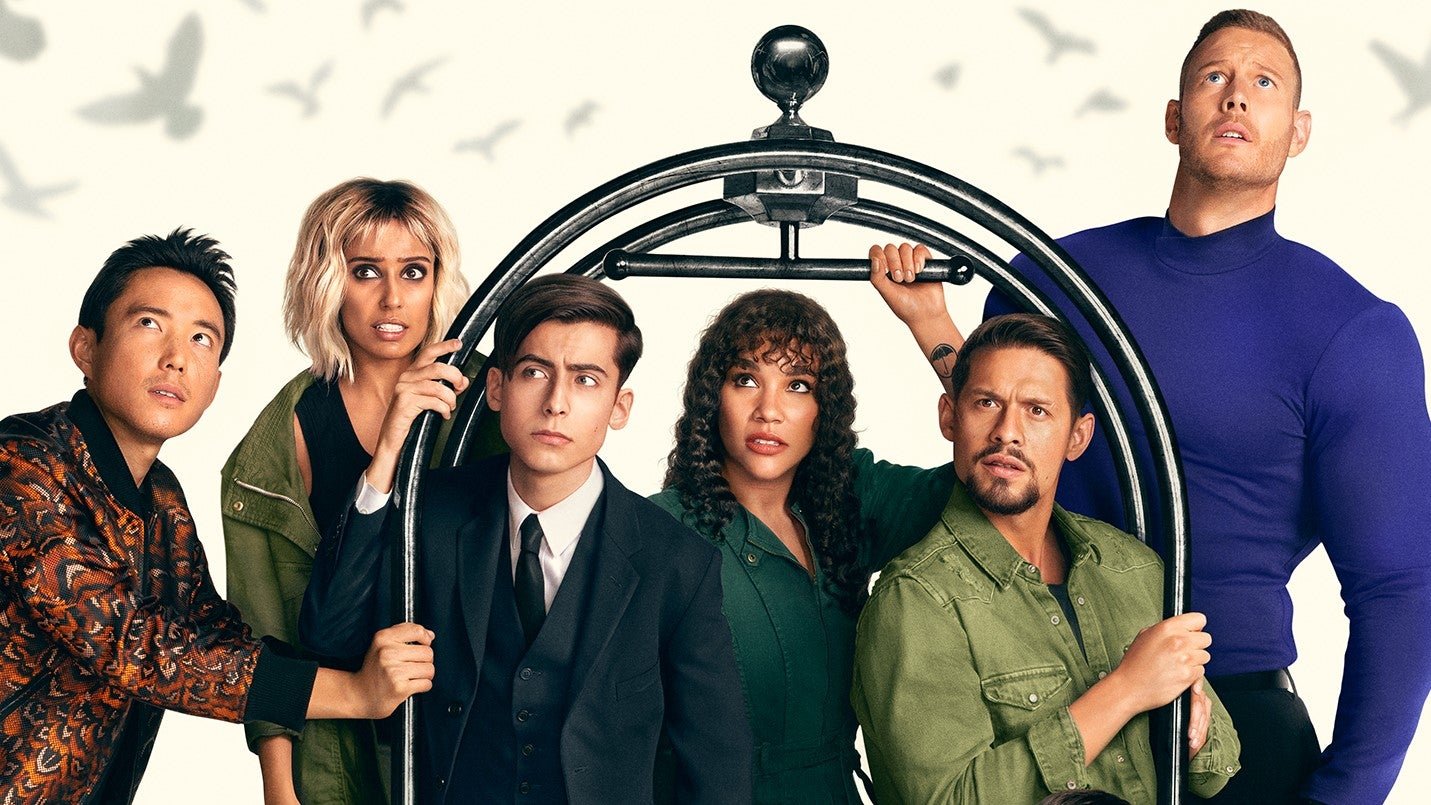 Apocalypse after apocalypse, inevitable disaster has never been so exceedingly entertaining as Netflix’s The Umbrella Academy. The streaming giant’s adaptation of Gerard Way and Gabriel Bá’s critically acclaimed Dark Horse Comics series has returned for its third outing, and fans will once again not be disappointed with the dysfunctional family’s latest heroics. While the story may not reach the spectacular highs of its predecessor season, The Umbrella Academy hasn’t lost its class in its junior year. Emotional, mysterious, and a bit too large for its own aspirations, The Umbrella Academy’s third season continues to bring its fan favorites to the top of Netflix’s offerings thanks to more character development, lovable dynamics, and a memorable soundtrack worth turning up those speakers for.

Back to an Altered Future

Picking up the exact moment where season two had left off, The Umbrella Academy season three continues to follow the aftermath of the Commission’s defeat and the heroes’ return to the year 2019. When the Umbrella Academy returns to their shared household they are quick to discover that trouble is already brewing as the group’s legacy has become nonexistent. Sir Reginald Hargreeves has shockingly raised a new academy of students called the Sparrows, and the Umbrellas have been left to drown in a world that no longer feels like home. Loosely based on the franchise’s critically acclaimed comic Hotel Oblivion, season three of The Umbrella Academy continues to batter time and space with emotional and moral turmoil. Every reason viewers love The Umbrella Academy is on full display in season three, yet it occasionally tries to open the door to far more than any show can handle in ten episodes.

There are plenty of moments throughout season three of The Umbrella Academy that will make viewers gasp in realization and completely change their perceptions of fan-favorite characters, but the overall narrative is certainly not as compelling or well-executed as the previous Dallas story arc. The plot of season three feels repetitively familiar and less charming, but that does not mean it fails to develop its characters or entertain. While the overarching story suffers from cast size and screentime, where The Umbrella Academy continues to flourish through all of its flaws is with its lovable characters. Similar to the first season, almost every member part of the main ensemble keeps viewers invested in their stories as they push forward on their own individual paths of self-discovery and realization.

Tackling the elephant in the room, global politics and the personal decisions of actors outside The Umbrella Academy‘s wall of comic book fiction have not hindered the show’s third season in any regard. Again, screentime and a weaker story boil down to season three’s core problem.

Elliot Page’s transitioning is naturally implemented into the show with Vanya’s story. The actor’s personal life choices never are a detriment to Vanya as a character–in fact, they are surprisingly beneficial. Continuing off the previous identity crisis from season two, Page’s character transitions from Vanya to Viktor Hargreeves in a thoughtful manner. The subject is a driving point for Page’s character, and the other cast members take their time to converse with one another about Viktor and how they can make him feel welcomed. For a story piece that certainly was not planned in advance by the writers, Viktor’s arc is weaved into the show with favorable results even if it could use more time to be fleshed out. Focusing on Viktor’s relation to the apocalypse was naturally far more important to The Umbrella Academy’s story–and that’s what the season gets right and wrong with its storytelling.

The Umbrella Academy’s third season does not always have its focus in a concrete position as it bounces between emotional character stakes and exploring its third end-of-the-world apocalypse. Standing at the heart and soul of The Umbrella Academy, Viktor, Klaus, and Allison unsurprisingly steals the show with their arcs for another season, yet their stories are not ones that generally move the main plot forward in comparison to Fives and Lila. The three grapple with their shaken realities in a spectrum of ways that feels fitting to the family’s dynamics, but only grow themselves. They go through the most emotional distress out of the cast as they find ways to tackle their overwhelming problems and live with the outcomes of their actions. Acceptance is the leading message of The Umbrella Academy’s third season and that is really driven home in the last few episodes. The central theme works, but only with the cast members who have a larger purpose.

The one returning cast member who got the short end of the stick when it comes to keeping with consistency this season is predictably Luther, however, that sentiment only lasts until after the halfway point when Tom Hopper’s character suddenly begins to play a larger and stronger role. It seems as if the writers love Hopper but initially never know how to kickstart his superhero onto a proper journey until the group needs to band together for one action-packed finale. Once he does reach that point though, Luther begins to pick up his weight. Most of this happens though only because of Sloane (played by Genesis Rodriguez) who provides a fitting companion to Hopper’s character. The only shame about Rodriguez’s inclusion is her occasional shallow development, a problem almost all of the members of the Sparrow Academy face.

Not Everyone Can Fit Under One Umbrella

While the veteran audiences love to get to bathe in their dramatic and over-the-top glory, the Sparrow Academy does not always reach the same expectations. Readers should not take that the wrong way though. All of the newly numbered Sparrows are fascinating foils to the Umbrellas and each has interesting designs and powers. The Umbrella Academy’s biggest issue in season three is often a lack of screentime and development for its newcomers. Season three is definitely eager to give its main ensemble plenty of time to continue evolving, yet it’s a shame how little time the Sparrows get to themselves considering their marketing focus. If anything, their lack of scenes can upsettingly feel like an excuse to just bring back Justin Min’s deceased character Ben to the spotlight. Time is never wasted in The Umbrella Academy’s third season, but there is just not enough of it.

The Umbrella Academy has always held its characters with pride and season three is no different from its predecessors. This is a series that has always thrived from its characters and each actor’s performance. Even when some of its key cast members like Tom Hopper and Elliot Page were not given the best scripts to work with during the first season, it was impossible to dislike the members of the team they brought to life. Saying that the cast of season three is a tad too large would be an understatement though. For a show with so many interesting characters, it is understandable how fleshing everyone out would be a difficult task to uphold–it’s practically impossible for any show to do so, especially when they are being limited to, again, only ten episodes. Ironically though, the cast size contradicts how tight and focused season three is with its concentrated mise-en-scène and efficient pacing.

It is no surprise by now that the computer-generated effects of The Umbrella Academy are not always a knockout, but the practical locations and overall cinematography tend to be a high point returning viewers will recognize. Season three keeps its location grounded and restricted. There is no globe-trotting or time-jumping adventure this time that takes the cast to several locations across the world. Between the setpieces and usage of immersive locations, season three of The Umbrella Academy never feels as if it is throwing its characters into backgrounds that fit the story’s needs to either unite or separate the cast. Hotel Obsidian, the Umbrella Academy’s latest base of operations so to speak, feels alive and eerie as viewers are constantly being dropped into the inn. Over the course of season three, the viewer becomes more familiar with the location as it stands out with recognizable details that allude to future events.

Thanks to the cast being closer together this season, the pacing also feels far more effective than ever before. For as incredible as it was, one problem season two noticeably suffered from was how it had episodes where it felt as if characters were being left dry with no screentime or were way too isolated from the rest of the cast to have a larger impact on the narrative. In season three, every episode has a reasonable balance between its core characters. There was never an instance where it felt as if a member of the main cast was being wasted of their potential or dropped because they had nothing to do in the narrative. The careful usage of Hotel Obsidian and the original Umbrella Academy household hits right and helps make the outside excursions feel more important.

You’ll Be Eagerly Awaiting The Next Apocolypse

Even in the face of a weaker narrative compared to season two, The Umbrella Academy’s third year is yet another high point for Netflix’s Dark Horse Comics adaptation from Steve Blackman in many ways. As the show catches up to Gerard Way and Gabriel Bá’s comic book run and begins implementing more original ideas into its own narrative, it is clear that the series will have no problem moving forward with finding a path for its dysfunctional cast of unstable superheroes. The Umbrella Academy season three continues to find new ways to surprise audiences with its characters while stringing them down a path viewers want to see–it just needs to shorten its cast and find more ways to better balance and consolidate its story. Ending with another major cliffhanger, you can be sure viewers will be back for more when another season (hopefully) makes the rounds in the future.