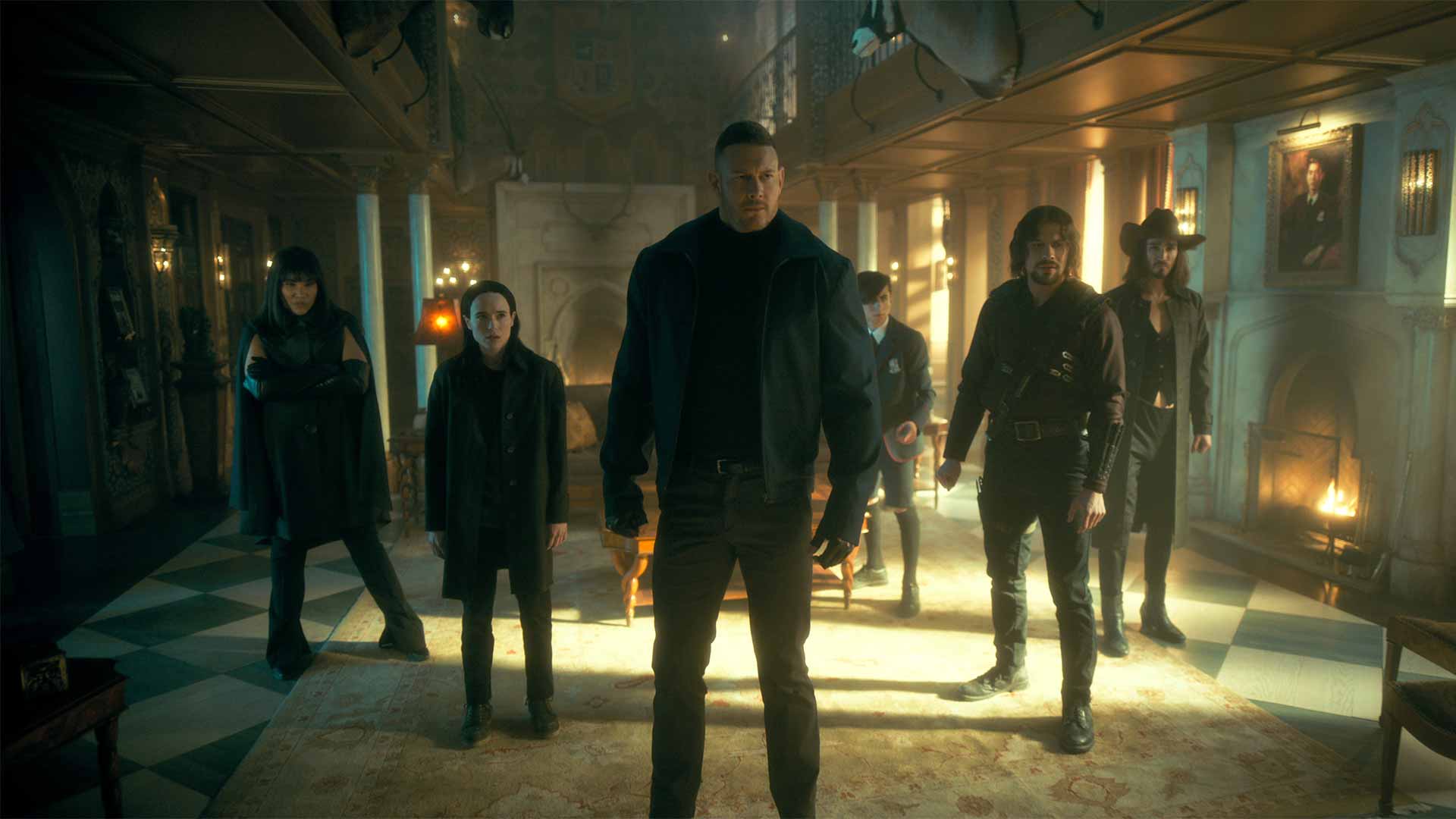 When isn’t this dysfunctional family always stirring up trouble across time and space? The Umbrella Academy season three is finally here, and with its ending comes dozens of questions as to what can possibly be next for Netflix’s Dark Horse Comics adaptation. From the secrets of Hotel Oblivion and the birth of a new world to the post-credits scene and its possible meaning, this is the ending of The Umbrella Academy season three explained–and of course, a whole lot of questions we still have regarding what could happen in a possible season four.

After defeating the guardians of Hotel Oblivion, the Umbrella Academy, the remaining Sparrow Academy members, and Sir Reginald Hargreeves witness the location transform into the technological marvel it secretly withholds. As revealed by Hargreeves to Allison, Hotel Oblivion was nothing but a massive facade to cover up an incredible power source. Hotel Obsidian and Hotel Oblivion were put in place to hide the reality of its hidden dimension that contains a device capable of bending reality itself. Like Hargreeves planned, he needed seven individuals to activate the device and forge a new world. Originally waiting to use the Sparrows to enact his plot, the father of the two academies instead opted to fill in his needed power sources with whatever super-powered children he could gather from both.

With her friends left screaming in agony for help as they turn to particles, Allison kills Sir Reginald Hargeeves using the last befallen guardian’s weapon to stop the academies from being absorbed into the device. However, her efforts to save both the Umbrellas and Sparrows proves to be meaningless as their father had already completed his goal. Left with two choices, Allison asks Viktor to not try and stop her as she decides to push the reset button Hargreeves was about to use on the universe. As a result of her actions, the earth is yet again saved from another apocalypse and parts of the cast are transported to separate locations.

While Allison reunites with her child Claire and her 1960s husband Raymond, the rest of the Umbrella Academy finds themselves in Hotel Oblivion’s elevator along with Ben. When the doors open, the crew discovers that Hotel Obsidian’s original location has now been transformed into a memorial park donated by Sir Reginald Hargreeves on October 1st, 1989. Of course, viewers should know by now after constant reinforcement that this is the same day all of the Umbrella Academy’s children were born.

Seconds after their initial exit from the elevator, Luther reappears this time alive and in the flesh. However, immediately the Umbrella Academy’s first leader is left in shock as his wife Sloane is nowhere to be found. Desperate for answers, Luther immediately grabs Five only to discover that he no longer has his powers–in fact, nobody does! While everyone has seemingly lost their powers, it should be noted by readers that Allison could be the one exception of the group. Allison was the only member of The Umbrella Academy who did not attempt to utilize their skills during the closing moments of the finale and her reemergence into the new world had her walking in the same injured state she was in before pressing the reset button.

Whereas the Umbrella Academy previously stood during the final scene united, the heroes now find themselves in total disarray and confusion. Luther is left running to find Sloane with Klaus following him, Ben storms out frustrated over the loss of his powers, Diego and Lila leave to live their lives, and Five and Viktor part ways after the team breaks into shambles. Each member of the group cleverly embarks on one of the six different paths of Obsidian Park as they leave each other to discover the world Allison created from Hargeeves’ mission.

Reginald Hargreeves is Expanding His Endeavors?

The final shot of The Umbrella Academy’s third season shows a city transformed by Sir Reginald Hargreeves’ reign. Viewers who look closely can see that the Hargreeves name is attached to seven different companies each with a unique ‘H’ logo. As can be seen above, Hargreeves Financial, Hargreeves Mental Estate, and Hargreeves Construction are just three clear examples of these companies. Each ‘H’ logo noticeably uses a different font, but each one has a circle behind them. The circles could possibly be a reference to “The Monocle”, Reginald’s alternate identity in the comics. Is it possible that each of these buildings could also tie into a different member of the Umbrella Academy in the future? The chosen names and industries seem very meticulous, but only time will tell!

Before season three can come to a close, the final scene unsurprisingly shows Reginald Hargreeves reunited with his formerly deceased wife Abigail, who made a significant appearance in the prior episode. At the beginning of episode nine, “Seven Bells”, viewers were shown the depressing days Luther spent while stuck on the moon’s surface in his original timeline. Above Luther’s small housing facility built by Hargreeves was a cryogenic chamber containing Abigail’s deceased body. Hargreeves has mentioned several times in the past that Luther was sent to the moon to defend something of the utmost importance. Perhaps what Luther was defending was not an object, but a person? Abigail will evidently play a larger role next season now that she is reunited with her husband, but several questions still remain as to what her importance was in the previous timeline.

After Short Change Hero by The Heavy wraps up and the first credits roll come to a close, audiences are treated to one last short scene right before they will anxiously be awaiting The Umbrella Academy’s future return. In the mid-credit scene, Ben is on a subway train that is definitely not located in America–or at least that should be the case if we are going by real-world geography.

According to the train’s loudspeaker, the next stop Ben is headed towards is the Yeouido Station. In reality, Yeouiso Station is located in Seoul, South Korea. While this location may seem new to viewers, it actually bookends season three of The Umbrella Academy. Seoul’s train station was the same location where Ben’s mother gave birth to him during episode one’s opening sequence. Why Ben is in South Korea is completely unknown, however, Hotel Oblivion did notably have several Asian and Korean elements within its esthetic. Is Ben looking for something connected to Hotel Oblivion? Is Ben even in South Korea or is this yet another twisted aspect of Hargreeves’ new world? Is this even the Ben from the Sparrow Academy? None of these questions can be directly answered, but there is plenty of reasons for Ben to be in this location.

What is Sloane’s Fate? Did She Die?

Sloane made it all the way to the end of Hotel Oblivion’s true reveal but where is she? Well, it wouldn’t be The Umbrella Academy if someone did not go missing at the last second! Sloane’s fate is unclear, but based on her lack of physical appearance from Obsidian Park’s elevator it is possible that the Sparrow Academy was erased from the timeline. Since the first season of The Umbrella Academy, viewers have not been informed what happened to the other 43 super-powered children that Reginald Hargreeves was unable to adopt, but it has alluded to several times that they are still out there. Based on our understanding of every season’s flashbacks, it is possible that a version of Sloane still exists, however, one that would have no memory of her fellow Sparrows or the Umbrellas.

Another potential theory that could explain Sloane’s disappearance has to do with Allison. Throughout all of season three, Allison carried a fit of clear jealousy for Luther’s love interest and even tried to rumor him into falling for herself. Is it possible that Allison’s deal with Hargreeves’ involved permanently erasing Sloane from existence? We hope not, but that is one of the many directions The Umbrella Academy season three’s ending could be implying!

If Netflix is to renew The Umbrella Academy for a fourth season, inferring as to what will come next based on the show’s original comics is getting more unpredictable for die-hard fans. For viewers of the Netflix series who are unaware, The Umbrella Academy has been loosely following Gerard Way and Gabriel Bá’s Dark Horse Comics series since its first season. Right now there are only three volumes in the series; Apocolypse Suite, Dallas, and Hotel Oblivion. As readers can tell from that last name, the show is now fully caught up to the source material. Outside of a few misfit stories that tie into the overarching narrative and the Tales of the Umbrella Academy spinoff series–which is actually somewhat tackled in Klaus’ story throughout seasons two and three–Netflix and Steve Blackman are going to have to helm their own continuity without any concrete inspiration from this point forward.

Unless Dark Horse Comics cracks the whip and gets Gerard Way to immediately finish up his proposed 8 volume saga, right now fans of Netflix’s The Umbrella Academy adaptation will be stuck in complete mystery as to how the show will stray from where the comics are going. Gerard Way is one of the writers and producers for the Netflix series so the creator’s footprint will always still be on wherever the show goes next. Until a fourth season starts development, fans of The Umbrella Academy will have to wait quite a while to see what awaits in Sir Reginald Hargreeves’ new reality!