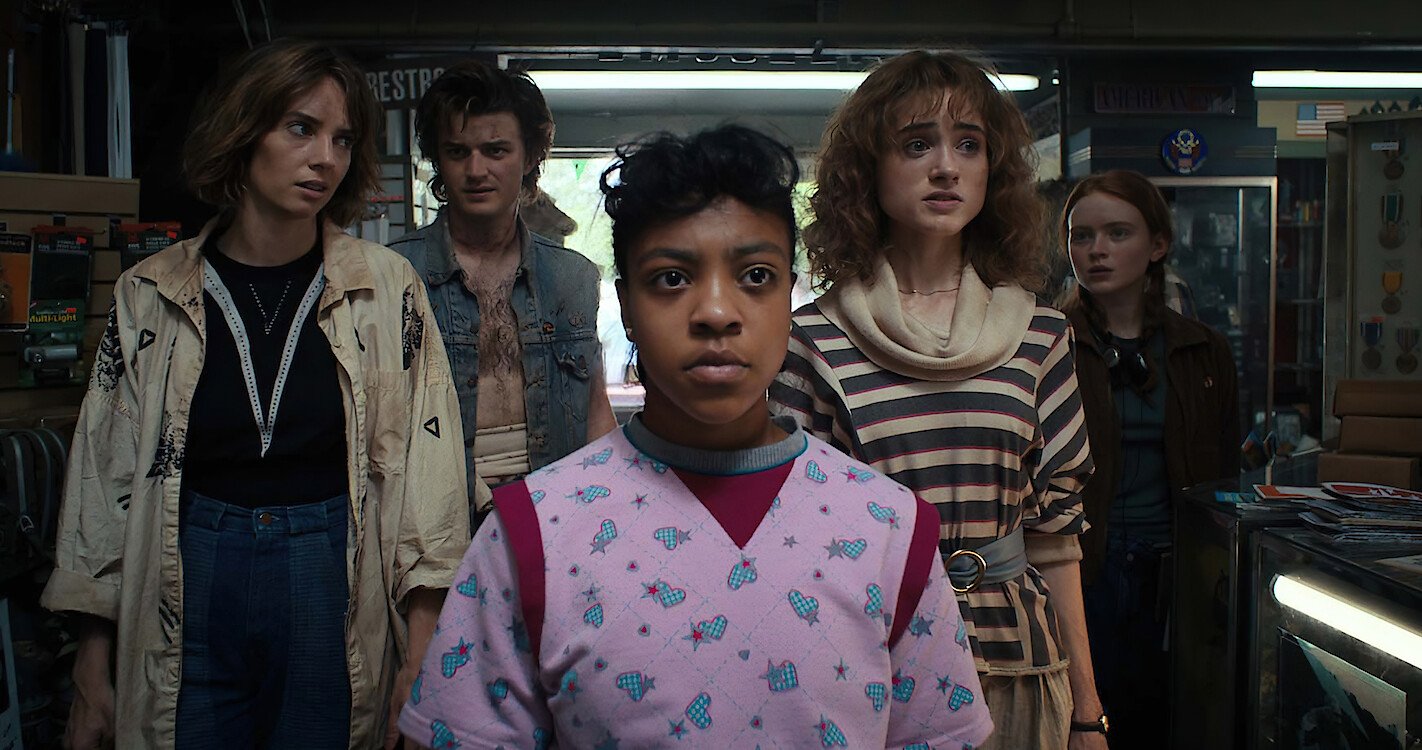 One has to respect the balls on Stranger Things 4 Vol. II Part 1 (aka “Papa”), a penultimate episode that feels more like 96 minutes playing Death Stranding than it does watching 96 minutes of television. Like Hideo Kojima’s divisive sci-fi FedEx Simulator, “Papa” finds itself in the awkward position of needing its characters to lay narrative track as they are (quite literally) driving on it – even though we’ve had nine hours to get here, “Papa” needs every single minute of its running time just to set up its many disparate pieces for the (even longer) finale. I mean, “Papa” is a road trip (well, three of them) featuring test tube babys, tons of sci-fi mumbo jumbo, enormously evil military entities, and long segments of nothing happening – could it be anymore Kojima?

Cultural parallels aside, “Papa” feels like much of Volume I preceding it; full of interesting ideas and strong performances, thoroughly hindered by a lumbering plot with too many competing ingredients. Though “Papa”, in most places, moves with much more rhythm than “The Massacre at Hawkins Lab”, but still suffers from an overabundance of patience, a sense that Jonathan (whose entire arc this season is “smoke weed and drive car”), Murray and Steve are the only ones who know where the gas pedal is, and when to use it.

Most importantly, the focal point of “Papa” is Eleven; and it’s here where Stranger Things 4 wastes the most time, in its attempts to wring every single minute and sneer out of Matthew Modine’s performance as Dr. Brenner. Most of his interactions with Eleven in “Papa” is nothing but a fucking recap, complete with actual flashbacks, as he retcons the show’s decision to not mention or discuss Henry until season four (which – it’s fine! You don’t need to justify this!) and summarizes Eleven’s season one scenes at an excruciatingly slow pace.

Look, the Brenner/Eleven dynamic has proved a rewarding one over the years, a compelling portrayal of a psychopath with a degree given free rein by the government to enslave children. Smartly, Stranger Things doesn’t go out of its way to try and humanize him, his hollow manipulations and emotional pleas to Eleven for his decisions echoing off the walls of the Nina Project to no response – but we’ve already spent so much time observing this dynamic, it just feels like wasted time (and that’s not even talking about the multiple scenes it takes Sullivan and his military boys to break into the Nina facility). Brenner is not going to be redeemed, and the Vecna flashback told us all we need to know here; why we needed to do a whole “Brenner turns heel one more time and drugs Eleven to imprison her” side plot feels unnecessary to the point, especially when it lasts all of fourteen seconds (notice how Gendo Ikari never drugged his son, or locked him up, to pilot an EVA – he didn’t need to).

Sure, it’s great to see Eleven deny Brenner the moral peace he seeks in his final moments; it even pairs well with the reveal in the previous hour of the source of El’s powers. She hates that she loves Dr. Brenner, that she still sees him as her father and the man who believed in her potential; but as her abuser and imprisoner, that dichotomy will never allow for emotional resolution between characters. Eleven’s resolution comes from destroying the helicopter that killed him; resolved of the responsibility of patricide, Eleven can briefly embrace the love she felt for that man to her benefit, even if she’ll never be able to reconcile that feeling in the present again.

Outside the bunker, “Papa” anxiously bounces back and forth between Hawkins and Russia – aka the two road trips this episode taking place in stolen vehicles (I guess the delivery van is technically stolen too?). In both, Stranger Things really has nothing on its mind but moving characters from one place to the other, physically and emotionally; it is almost workmanlike how these scenes play out, especially once the Hawkins crew steals someone’s Winnebago. As the modified Hellfire Club prepares their weapons and hearts for the real end times, “Papa” just inelegantly doses out one exact scene of emotional development for each pairing. Nancy and Steve? You can have a scene of eye batting and talking about dream futures (does she even remember Jonathan’s name? Tune in next week!) Lucas and Max? You get one scene of cute dialogue. Eddie and Dustin? You may have one bromantic scene where Stranger Things nakedly teases killing off Hawkins’ most-hunted problem teen.

(Out in Nevada, we also get that Will/Mike scene, where we get to see Will’s ‘hidden’ D&D drawing, make some speech about how Mike has always been their leader, then start bawling when Mike starts using Eleven as a stand-in for what I assume are his romantic feelings for Mike. Real strange moment there – and combined with Robin’s gay glances at her bandmate, make for a pair of very awkward, though well-intentioned, attempts to integrate more diverse romances into its stories.)

In that sense, “Papa” almost works in spite of itself, because of course we want to hear Steve wax poetic about the dreams he’s probably never going to achieve (as he always has), just as we want to see Eleven throw Dr. Brenner against the Nina Cube and Will to finally show someone that goddamn painting so he can’t stop staring at it. “Papa”, despite its maddening construction, hums along even though a lot of it is unnecessary and nonsensical – it does so by properly setting the tone through characters like Nancy and Max, who are ready to illegally modify shotguns and stop playing “Running Up That Hill” (respectively) so we can find a goddamn resolution in all of this.

Those pockets of inspired action are far and away the highlights of “Papa”, an hour that arguably suffers more from the overwrought, laboriously drawn out plotting of Stranger Things 4 (side note – remember all those pissed off parents? Where the fuck are they right now?) than any other. As a penultimate episode, this is to be expected to some degree – but nearly everything character-centric is tamped out in service of the plot, which is really just “three cars driving to destinations” for 90% of its running time. And given how much time it took to just get to these parallel road trips, one has to wonder what we’re going to spend over 150 minutes on in the season finale.