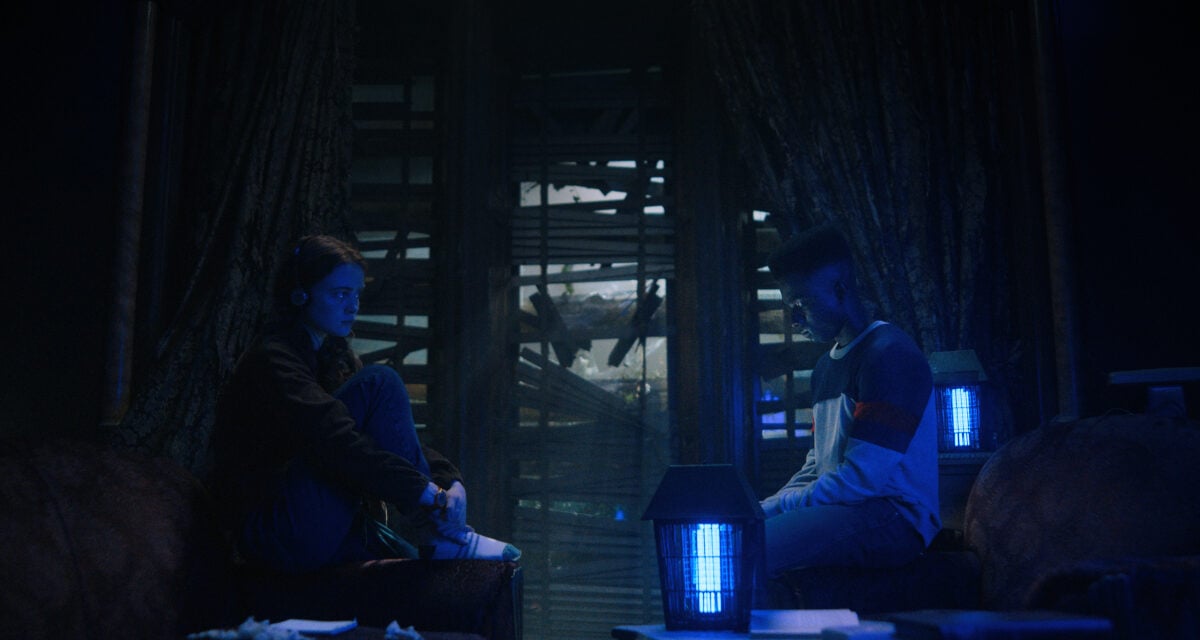 There are some truly exhilarating moments of television in “The Piggyback”, Stranger Things 4‘s super-sized season finale – in fact, one might argue the episode’s extended second act is among some of the best, most ambitious television Netflix has produced to date. And yet, “The Piggyback” is not a great episode of television: despite the great lengths, this season’s gone through to squeeze every drop out of its sprawling trio of narratives, “The Piggyback” strangely can’t let go of season four’s stories – which makes a magnanimous season finale feel much smaller and tangential than it should by the time everyone’s looking at the dark sky over Hawkins and the credits roll.

“The Piggyback” and its sentiment towards story is best summarized by the brief reunion of Joyce and Hopper taking place between Russian prison breakouts (yes, there are two of them in Volume 2); there’s a lot of foreplay and blood-pumping to all the right places, but there’s nobody leaving the room feeling happy or satisfied. And, like the entire fucking Russian plot, it takes way too long to get to these non-endings – it reminds me a lot of Sons of Anarchy‘s penultimate season in that way, which is not the kind of comparison you want your cultural touchstone series getting ready for its final run (which we’ll see in… 2024? 2025?).

Thankfully, Stranger Things does much better by its characters than FX’s series of horny, angry bikers; “The Piggyback” mostly succeeds as an episode trying to blend its various identities across seasons, harmonizing everything into a neat thorough line that prepares the show for its final season. Nancy with a shotgun, Eleven with her powers, Dustin with a shield embedded with nails; these are the images and moments that marry Stranger Things‘ discordant seasons together, marrying past and present thematically in a way that sets the track for the more explicitly drawn connections from Vecna to moments in previous seasons (the clock sounds, Will feeling his presence, etc.). Just having that on a plot level would feel extremely empty; though it exposes how little has changed with these characters across these nine episodes, “The Piggyback” takes a few moments to reflect on who these characters have become across the series, which is a neat way of pulling a lot of discordant ideas, performances, and characters together as elegantly as possible.

It’s funny how getting to the point will do that for a show; characters like Lucas come into neat focus in “The Piggyback”, one of a few key examples of Stranger Things regaining its feet after a lot of languishing in middle episodes. Though Lucas’s reality check moments around Max are certainly not subtle, they are wildly effective in bringing back to life a character whose arc was lost in the season’s muddled middle third. Lucas fighting to save Max’s life allows “The Piggyback” to re-ground itself around one of its stronger characters: though Lucas joining the basketball team was inevitably going to be a source of conflict, how Stranger Things twists that trope is really terrific.

Lucas joining the basketball team and seeing their exclusionary, violent mannerisms offered Lucas an opportunity for true growth, the kind that Stranger Things has often struggled to find with other characters (I’m looking at you, Dustin). Lucas, rather than let Max push him into the world of elitist douchebaggery, instead sees the morbid reflection of himself in Jason; able to show off like he’s a leader but lacking the actual testicular fortitude and wit to actually fill the role. We’ve seen Lucas step up before, but in perhaps the one good example of Stranger Things utilizing its high school setting (because let’s be honest, all that shit was dropped by the end of the first episode), Lucas’s maturity in this episode feel appropriately scaled to the occasion, with the life of the girl he loves on the line, willingly exposed in a way that he can barely comprehend, much less try to control.

Contrast Lucas and Max in “The Piggyback” with Steve and Nancy, which has become the biggest cock tease in modern television; when the fucking show puts Nancy and Jonathan together and they basically shrug about their relationship, then drops the entire audience’s panties when Steve drops the Good Guy monologue on Nancy, it’s very clear where they want to go with this story. But they refuse to engage – instead, they slap Nancy and Steve (and Robin) to a fucking wall (literally), and leave them there unseen for large swaths of the episode.

“The Piggyback” giveth and taketh away in maddening places; it’s not just the strangely unresolved romantic conflicts, or the obvious fact the entire Russian plot line could’ve taken place in one single episode (seriously – if you wanted to do an 80-minute episode, this was your chance!!!), but all of Stranger Things 4 finale feels in conflict with itself, only willing to inch its overarching narrative forward – a design that stands in direct contrast to the mostly contained trio of preceding seasons, which all followed a pretty reliable formula of finishing the fucking story before cutting to credits. “The Piggyback”, knowing it has another blank-checked season ahead of it, has no such concerns – and thus, does not make narrative resolution a priority in any sense of the word.

I mean, we’re talking about a finale that brilliantly lays out a montage in the first act, allowing it to expedite the big Vecna/Hawkins Squad showdown in the second act, and focusing Vecna’s assault squarely on the shoulders of Max, who has quickly become the show’s moral center, the begrudged girl who grasps onto the dying slivers of hope with reckless abandon. With Eleven in a tunnel and Mike in a car all season (remember when Mike was a character? LOL), Max was left with the most dynamic arc of the series, a petri dish that provided the basis for a lot of the show’s emotional and narrative beats, the true fulcrum in which the show’s blended homages crystallized together into one perfect story.

Unfortunately, it all leads to an underwhelming, offscreen Vecna escape – which sounds like a really underwhelming way to end a scene of Robin throwing Molotovs and Nancy firing off rounds from a sawed-off shotgun, and most definitely plays like one. It almost feels like the characters can’t believe it – Eleven is looking around in the void, both for Max’s soul, and the logic behind the decision to treat this entire season as a supervillain origin story first, and as an actual television show about characters the audience loves second.

It’s not a bad episode of television, of course – again, the buildup to Vecna’s mind flaying of Max and the cascading climactic moments around it is fantastic, especially when those moments are grounded in real emotional stakes for its characters (or in the very rare moments it takes a beat to pause, like when Eleven explains that she’s in a salt bath in a pizza restaurant). To call Eleven’s emotional attempts to save her first best friend ‘bad TV’ would just be fucking stupid, quite frankly – but the feverish emotional pitch that moment has can only ripple so far in both directions through a 150-minute episode of television.

As I’ve talked about all season, the length of Stranger Things 4 was its worst enemy; the longer the season got, the flatter its narratives and characters arcs became, dragging itself down into a cycle of unnecessary flashbacks and plot points that exist more as save points than coherent developments (ARE WE NEVER GOING TO TALK ABOUT BURYING A FEDERAL AGENT IN THE DESERT???!!!). “The Piggyback” not only has to contend with its own construction, but the cumulative exhaustion of the previous eight episodes in the season – which, outside of “Dear Billy”, enjoyed being much ado about very little – which can be felt in the slog through the Russian scenes and overwrought Vecna posturing… the cascade of climaxes and teases in the final 30 minutes are a well-constructed salve for this issue, but it’s definitely not enough to fully conceal the glaring issues of the season.

Stranger Things 4 is the epitome of “too much of a good thing”; with such fantastic concepts like Vecna, Max, and the disappointments of high school, Stranger Things 4 clearly still has the capacity to tell interesting stories, especially those analogous to the era of films it is clearly reverent for (are they a little too willing to settle for homage? Definitely debatable!). But thirteen hours of television should feel like it told a complete story somewhere along the line; in that vein, “The Piggback” is a frustrating embodiment of its own title, replacing the cool metaphysical parkour of its namesake for a disappointing metaphorical allegory about a season finale beholden to a series of episodes we’re not going to see for at least two years. There’s no resolution to be found in “The Piggyback”, in a way that feels like Stranger Things may never even try to recover from, its angsty teenagers and their lives increasingly swallowed by the gravity afforded the mystery of The Upside Down.

Personally, I enjoy Stranger Things when its stories of mind flayers and ominous chimes were texture for a larger story of outcasts and friendship; the larger Stranger Things has gotten, the less attached to that identity it has felt – and yes, shows can and should evolve, but whenever the Upside Down becomes a central plot point, Stranger Things seems to abandon its characters in search of the next cool mystery, the next cool image, the next cool plot point to add to the mosaic of Vecna and the world that Eleven sent him to in 1978.

It makes for a puzzling final image, where our protagonists all cuddle outside Hopper’s cabin, reunited but fearful of what is to come as the sky splits and the world succumbs to Vecna’s influence. Ostensibly, it is a group of characters worried about the plot, rather than paying attention to themselves and each other – and its that shift across the past two seasons that has taken away a bit of the show’s charm, even as it has morphed itself into being a more ambitious, violent version of itself without losing its cultural phenomenon status. More importantly, Stranger Things 4 proves that the series is still capable of telling the kinds of character stories that made it great in its earlier seasons – those stories just aren’t cool or big enough anymore, an exponential increase in scale that feels unwarranted for the series it sprung from. Stranger Things 4, for better or worse, is a blockbuster season of modern prestige television: as fascinating as it is overwrought, as visually impressive and illuminating in its best moments, as it is bloated and thoroughly weightless in its worst moments – that dichotomy at the heart of Stranger Things 4 drives every minute and decision of “The Piggyback”, to equally fascinating and underwhelming result.

Why You Should Be Watching The Bear, the Best Streaming Show of the Year