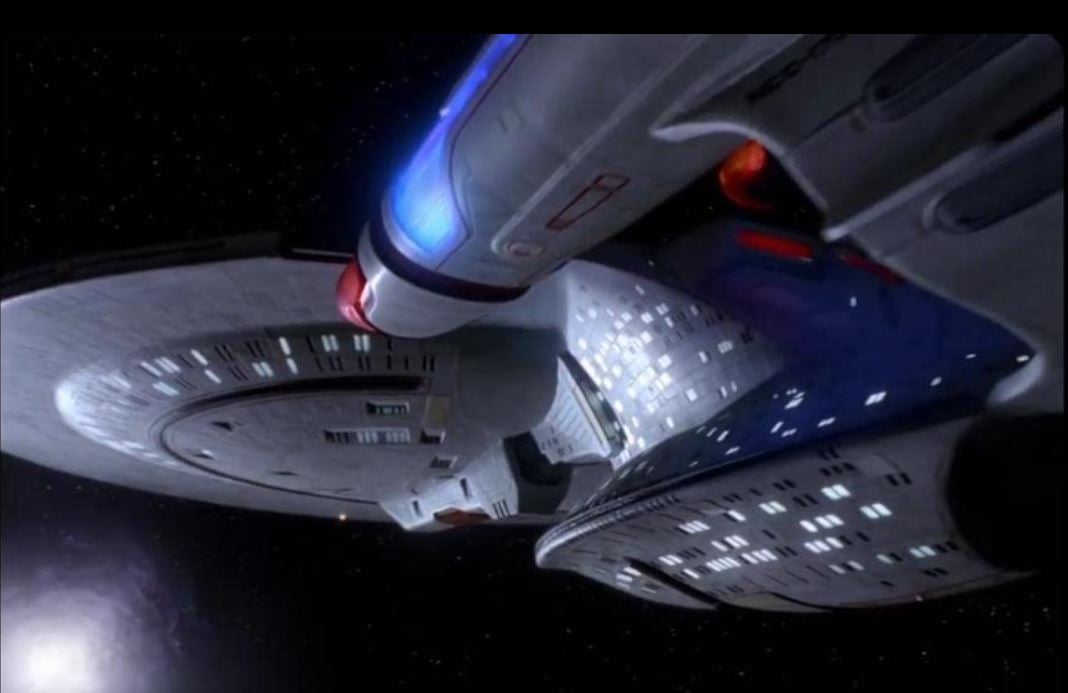 Star Trek: TNG, “All Good Things…” is a touching conclusion to the series

There comes a time when all things must come to a close, and when it happens, all one can truly hope for is that this closure, in some way, lends the satisfaction to assuage the loss. It seems like a strange notion now, when every fictional story has to have an “epic conclusion,” whether it be Batman, Lost, or Harry Potter, but there used to be a time when one could wrap up a fable by essentially allowing it to continue off-camera. Rather than tear up the universe established by years’ worth of scribbling and shooting, that world could be allowed to carry on. The characters wouldn’t die; we’d just be saying goodbye. One of these shows, an iconic slice of visionary television ambition (read philosophically adjusted re-hash), took this seemingly indecisive tact and delivered one of the most satisfying small screen finales ever.

The fact that Star Trek: The Next Generation even got that far is something of a small miracle. After Gene Roddenbury’s original series was canned in the 1960s without a chance to wrap things up (the show’s latter popularity and immortality was due to syndication and the success of the movies), there must have been a feeling that TNG would follow a similar path after a wobbly first couple of seasons. All of the things that made Star Trek so vulnerable to mockery were still clearly evident; the bizarre costumes, hokey concepts, often stilted dialogue, and the sense that a show with pretensions of moral and philosophical wisdom spent too much time milking ideas straight out of 50’s B-movie fodder. What got the show through its ‘darker’ era, those very grand notions finally emerging through male miniskirts and tar monsters, were the elements that let it grow, develop its potential and reach a point where the final episode was not just pre-planned but also a huge event.

And so it all came to the perfectly named “All Good Things…“, the last episode of the seventh season and the last time the crew of the Enterprise-D would share the screen (at least on TV). Instead of going for Borg invasions or intergalactic wars in the same manner as fellow successors Deep Space 9 and Voyager, instead a self-contained story was picked out that stayed true to the ethos of the show – episodic and standalone segments spinning yarns built on mind-bending flights of imaginative fancy with future-science as the cipher – as well as paying tribute to past glories. Patrick Stewart’s Jean-Luc Picard is faced with saving humanity from destruction, but to do so must manage his consciousness as it travels between three different time periods and figure out exactly what will cause oblivion, how to stop it, and just why his mind is being made to travel. It’s just another day at the office on board the Enterprise.

Except, in many ways, it’s not; while “All Good Things…“ doesn’t try to take on the scale or threat to dwarf any other episode in the show’s run, crucially it does so with the knowledge that this is the final chapter, maybe not for the crew but certainly for the audience. The plot concept is clearly a time tested one, a spec script left in the vault and only tended to by occasional re-writes, and is one of the tightest and most ingenious that the writers ever managed to produce, a great piece of science-fiction theorizing rife with motifs and recurrent mathematical and symbolic themes (the episode’s title has a double meaning) that could easily have been the making of a celebrated novel. Indeed, it was clearly the inspiration behind the much-celebrated “Lost” episode “The Constant.” This, however, is not what makes for the feelings of the finale. Instead, there is intelligent and affectionate attention paid towards the cast, making them the real subject of the episode. For a show that often neglected characterization in favor of narrative, it seems appropriate that TNG would pick the last minute to actually treat the crew like real people.

It’s what makes the lack of ‘epic-sauce’ so acceptable and quite admirable. In the three timelines presented (Picard’s first mission on the ship; the show’s ‘present’; a future where Picard is retired and stricken by an ‘Alzheimer’s like medical condition), the real subject for drama is the relationships between the crew, particularly in a future where they have grown apart and, in the case of Riker and Worf, become slaves to bitter feuding. The past sets up the start of a bond that would last seven years, introducing these characters as if new, while the present represents the best period of their friendships and is the perfect time to take steps to avoid these ties falling apart.

At the centre of all this is John de Lancie’s Q, the mischievous nonlinear being with Godlike powers and Troll-like sensibilities. In a perfect bookend to the show’s opener, he returns to conclude the trial of humanity with a fervent guilty verdict. To somewhat harshly curtail this summary, the anomaly, which truly is the episode’s MacGuffin, takes over as the villain as it snakes its way backwards through time to snuff out our race at its conception. Like in the first episode “Encounter at Farpoint,” however, it is clear that Q simply has an infuriating way of educating and helping, giving the representative of the human race (Picard, as far as Q is concerned) a gentle push with one hand while slapping him with the other. This masked faith is redeemed as Picard, against all odds, successfully saves the day and is returned to his reality with an important lesson learned. Several, in fact. The finale finally qualifies Q’s true and undoubted stance; he is distrustful of humanity, sees them as a self-indulgent blight, but knows they have potential. Until it is fulfilled, he will simply toy with them to make sure they take the right path.

This all makes for an oddly cathartic experience, one that mystifies and intrigues with its science and then warms the heart with its heart and subtext. The final scene is not a CGI fest; it is simply the main cast playing poker and facing further adventures and likely a brighter future. It might be controversial to conclude the show by…not concluding it, but somehow there’s something more enjoyable about knowing they are still out there, exploring strange new worlds during their trek through the stars. Considering that the show rarely ever leaned heavily on serialized storytelling, this is perfectly appropriate. All we saw were their adventures, not their full lives. And through them, we learned something more about our own lives, our own mortality, and about what the world can bring.

With a tight and intricate final chapter and touching epilogue, The Next Generation put the cherry atop the icing and justified its own occasional hokiness. Flawed, divisive, but pure science-fiction and the perfect ending to the story.

The Angel Series Finale is a Strong, Emotional Finish to the Buffyverse