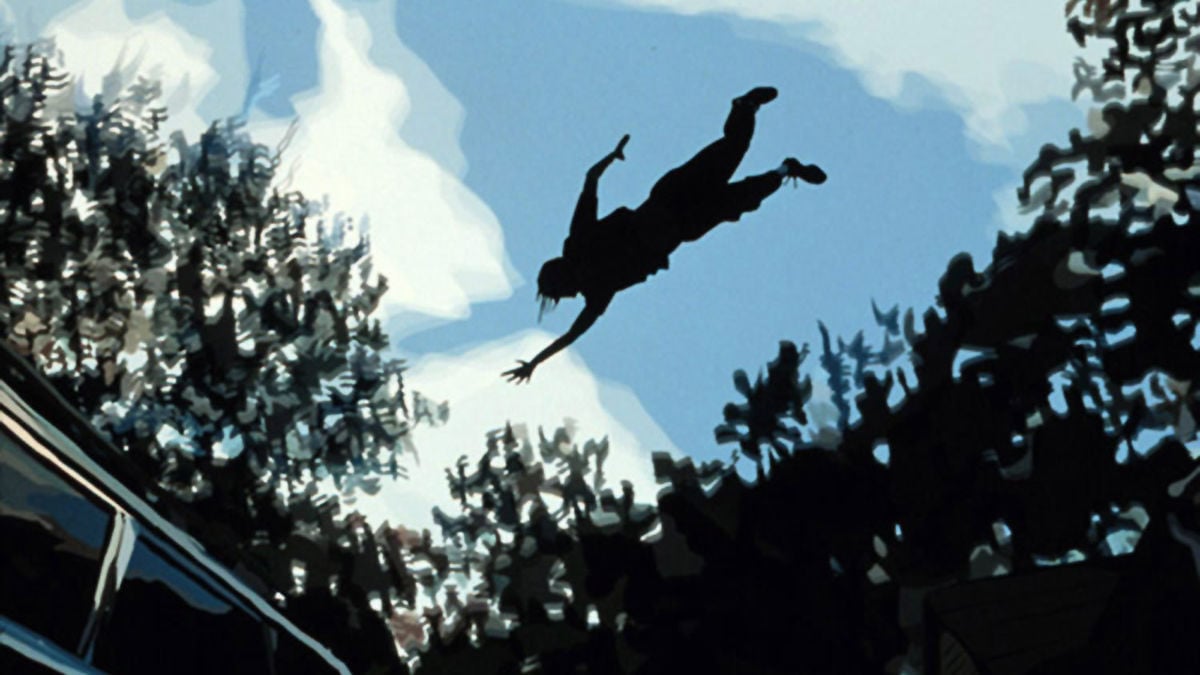 Richard Linklater, aside from Before Sunrise/Sunset/Midnight, hasn’t made any direct sequels, but he does like to make spiritual sequels. His Everybody Wants Some!! was very much a pseudo-sequel to Dazed and Confused– none of the characters were the same — but the vibe was strikingly similar.

Linklater’s first film was 1991’s Slacker, which used a nontraditional, mostly plotless narrative to follow a group of denizens in Austin. The film not only launched Linklater’s career but still stands as a seminal movie of the 1990s indie film movement.

A decade after Slacker, Linklater made another film similar to Slacker, albeit one with rotoscoped animation. The result was Waking Life, which landed in theaters 20 years ago this week. It’s plays something like if you’d watched Slacker, and then had a vivid dream about it later that night.

Like Slacker, the narrative of Waking Life was nontraditional, featuring a specific character (voiced by Dazed and Confused‘s Wiley Wiggins and animated to look like him) ambling through life in a dreamlike state- to the point where it’s not always clear whether he’s dreaming or not. Most of the scenes have Wiggins’ character coming into contact with people giving heartfelt, philosophical, and sometimes angry monologues.

The monologues run the gamut from deep and moving to navel-gazing bullshit, with the appearance by Alex Jones —at that point more of a colorful local Austin character, as opposed to a dangerous political extremist with the ear of the (former) president of the United States — clearly falling into the latter category. Although Jones then, as he does now, drove around in a car equipped with loudspeakers, as he yelled his red-faced rants.

But when it comes to judging the philosophy of Waking Life, your mileage may vary, depending on your personal views, or more likely your state of mind at the time of viewing.  Linklater’s work, especially Dazed and Confused, has been associated with stoner themes, but Waking Life seemed aimed clearly at people who were stoned at the time they were watching.

Stoned or not, Waking Life led to lots of arguments about its meaning, whether the entire thing was meant as a dream or only parts of it. The film also arrived just weeks after the 9/11 attacks, when many were left in an introspective mood. There’s even a small appearance by Hawke and Delpy, as their characters in the Before movies.

Linklater would go back to the rotoscoping well again, with 2006’s A Scanner Darkly. His next film, next year’s  Netflix picture Apollo 10½, reportedly uses the technique as well.

While Waking Life may not go down as Linklater’s greatest film — I would place it behind Dazed and Confused, Slacker, School of Rock, Boyhood, Bernie, Everybody Wants Some!!, and all three Before pictures — it was the right film at the right time, and likely a movie only Linklater could have made.

JFF 2021: Hokusai and Sumodo- The Successors of Samurai