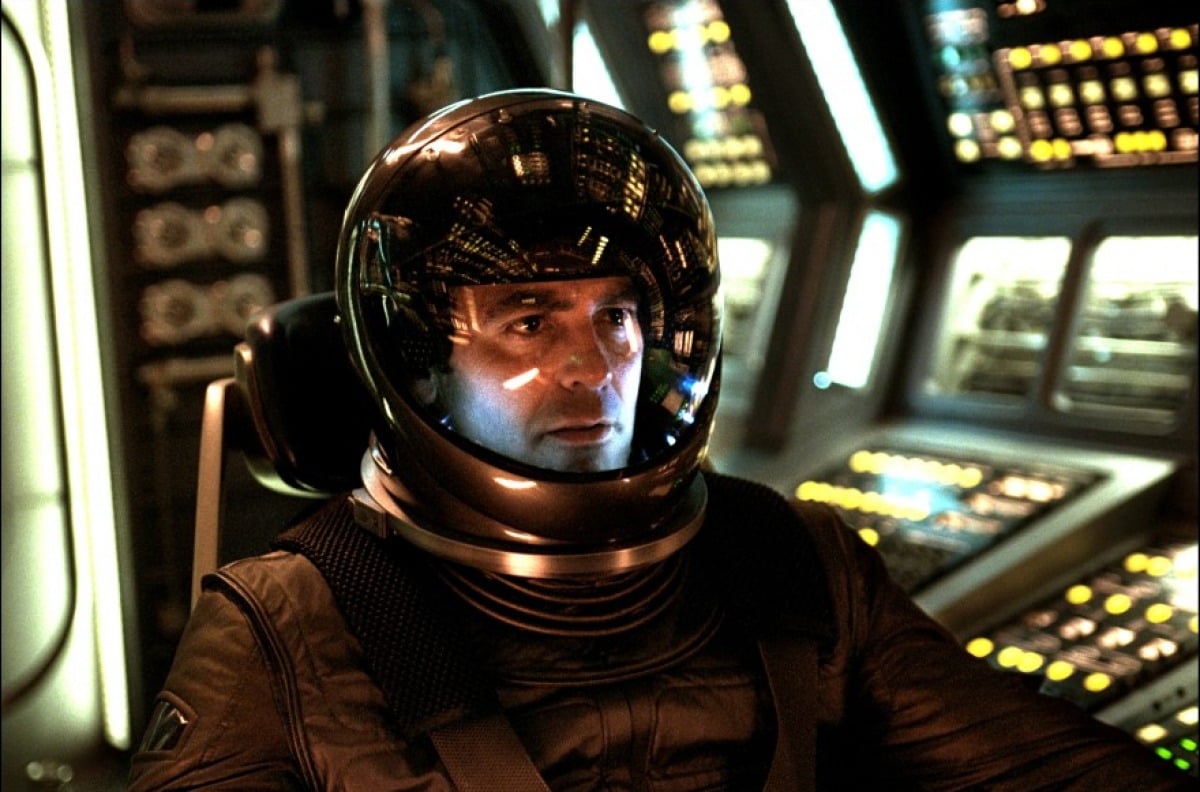 Solaris at 20: A Retrospective

Remaking movies is a practice as old as the art form of film itself. Those who decry modern cinema’s propensity to redo pictures need only consider that Alfred Hitchcock didn’t just once remake a film, he remade one of his own (The Man Who Knew Too Much)! But what good is a remake? The lazy version is one that barely differs, one that doesn’t try to offer anything new or add value to the experience of the original. Then there are attempts from auteurs who go about their business in such an idiosyncratic fashion that one can’t resist the temptation of seeing what they come up with. Steven Soderbergh, as eclectic as directors get, wrote and directed Solaris, released in November 2002.

As discussed in a retrospective only a few months ago, the original was an Andrei Tarkovsky venture from 1972, itself inspired by the novel by Stanislaw Lem. The previous article concerned itself with how Tarkovsky answered Stanley Kubrick’s relatively cold existential space adventure 2001: A Space Odyssey with something a bit warmer if not less intellectual. Soderbergh continues that mission with his version which, while steeped in high-minded food for thought, is even warmer, if only a little, than what Tarkovsky offered three decades prior.

The 2002 version takes a few extra cues from what early drafts of the ’72 picture strove for, but the key element here is how the editing splices ideas, memories, facts, and emotions to deliver a remake that stands on its own whilst very much deserving of mention in the same breath as Tarkovsky’s masterpiece.

George Clooney stars as Dr. Chris Kelvin. Very early in the story, the psychologist is called upon by a colleague, Gibarian (Ulrich Tukur), via video message to join him and the crew on a station hovering above the mysterious Solaris. No explanation is given as to why, but Gibarian sounds perturbed by something. The entity known as Solaris, a kaleidoscopic sphere of shimmering light and synapse-like lighting effects, is barely explained. Kelvin is whisked to the station where he meets the quirky Snow (Jeremy Davies) and the slightly paranoid and cautious Dr. Gordon (Viola Davis). It doesn’t take long before Kelvin gets an idea of what Solaris is doing, especially when his dead wife Rheya (Natasha McElhone) suddenly appears after the protagonist dreams of her one night.

For Solaris, Soderbergh worked with frequent collaborator Peter Andrews as his director of photography. That’s an inside gag. Peter Andrews is Steven Soderbergh. Moreover, so is Mary Ann Bernard, the film’s editor. In essence, this film is very much a true work from an auteur, as are the majority of Soderbergh’s efforts anyways.

Under that lens, it becomes even more intriguing to watch this interpretation of the famous story unfold. Given that Soderbergh’s fingerprints are all over the place, this very much is his interpretation. Some things about the 1972 film are lost, but others are found. Tarkovsky’s spent a considerable about of time during the first third (of a nearly three-hour long film) on Earth as a returning astronaut tried their best to explain how Solaris behaved, video documentation in hand. Kelvin had a critical relationship with his father, something the ’72 picture delved into in an extended opening scene. Soderbergh’s curiosity lies elsewhere, even if he never strays too far from what the original story had on its mind.

It doesn’t take more than 10 minutes for Clooney’s character to take his first steps in the space station and understand that something is amiss. Even so, what precedes his arrival echoes the 1972 film in its own way. Clooney’s Kelvin is no chirpier than how Donatas Banionis played the part. An early edit cuts to the American Kelvin walking headstrong past crowds in a non-descript urban jungle on a rainy day. The roar of what sounds like an aeroplane dominates the soundtrack during those few moments, seemingly an homage to the strange, hypnotic car ride sequence through a Japanese city in the older film.

Where Soderbergh’s version truly soars is how it opts to stray from what Tarkovsky did. Not because it’s better. Both films are quite good, but each attempt something a little different. The sudden appearance of Rheya is given more extra-terrestrial weight this time around, as it is abundantly clear that her apparition is a result of Solaris reading Kelvin’s dreams. This is the first sign that editing is a key ingredient in telling the story. Not that this technical aspect is never important otherwise, but here it means everything.

Furthermore, it isn’t merely that Kelvin’s memories are interspersed with shots of him sleeping or thinking. The alien force feeds off thoughts and memories. Whatever Rheya thinks, whatever increases her three-dimensionality, is a direct consequence of Kelvin’s mind. Her behaviour, her voice, and eventually her suicidal tendencies all become integral to her character. It’s almost as if the film is warning the audience to not blame Solaris, but rather the protagonist. In this bizarre twist, the otherworldly force is not all-knowing. Its knowledge is limited to what the nearby astronauts think and feel.

Editing is critical because it’s how Soderbergh’s re-imagining marches to the beat of its own drum. Not only is the 2002 picture considerably shorter in duration, but a significant portion of the runtime sends viewers back to Earth, only not quite. Most of the Earth-bound scenes are, as one can probably guess by now, Kelvin’s memories of time spent with Rheya, both the good and the bad. What results is a challenging plot in which the lead character reckons, both acceptingly and fearfully, with an entity that he creates. Rheya cannot be her true self, only what Kelvin imagines her as, and all those notions can only be based on memories.

One of the film’s many highlights is the performances of its two lead actors. Although Clooney is very strong in his more sombre, pensive way, Natasha McElhone has a surprising amount of heavy lifting to do. Again, she’s not playing a real human being but a facsimile that can only think and act as Kelvin’s memories dictate. Moreover, it isn’t as though Kelvin plays god with Rheya. He loved her dearly. Many of the souvenirs are pleasant and romantic. That said, their ending was bitter, with an extra layer of tragedy slabbed on for good measure.

Natalya Bondarhuck’s performance as Hari in 1972 was excellent for what it was. By the same token, it was perhaps a bit reserved. That might simply be the Soviet touch, cultural differences, and all. McElhone’s pays Rheya with more forceful emotion when she (it?) understands why her own memories of herself are so limited. The existentialist crisis weighs heavy on her shoulders. To be living and breathing but also to not be whole. It’s difficult to not be empathic toward her plight, even though it’s impossible to fully appreciate.

Ultimately, Soderbergh’s Solaris is about the battle of reason against the heart. Humans need both to fully function. There are occasions when one justifiably takes precedence over the other. Other times…it’s more difficult to defend and that’s what makes us human. How important is it for us to be happy, to be comfortable? What is the maximum price an individual is willing to pay to embrace what they perceive as happiness and comfort? What corners is an individual willing to cut?

All those questions and more are explored in Solaris. “Mary Ann Bernard’s” work is one of the chief ingredients that send viewers on the journey alongside Kelvin. Some will disagree with what he opts for, and some may agree. Regardless of where one stands, it’s a very human dilemma.