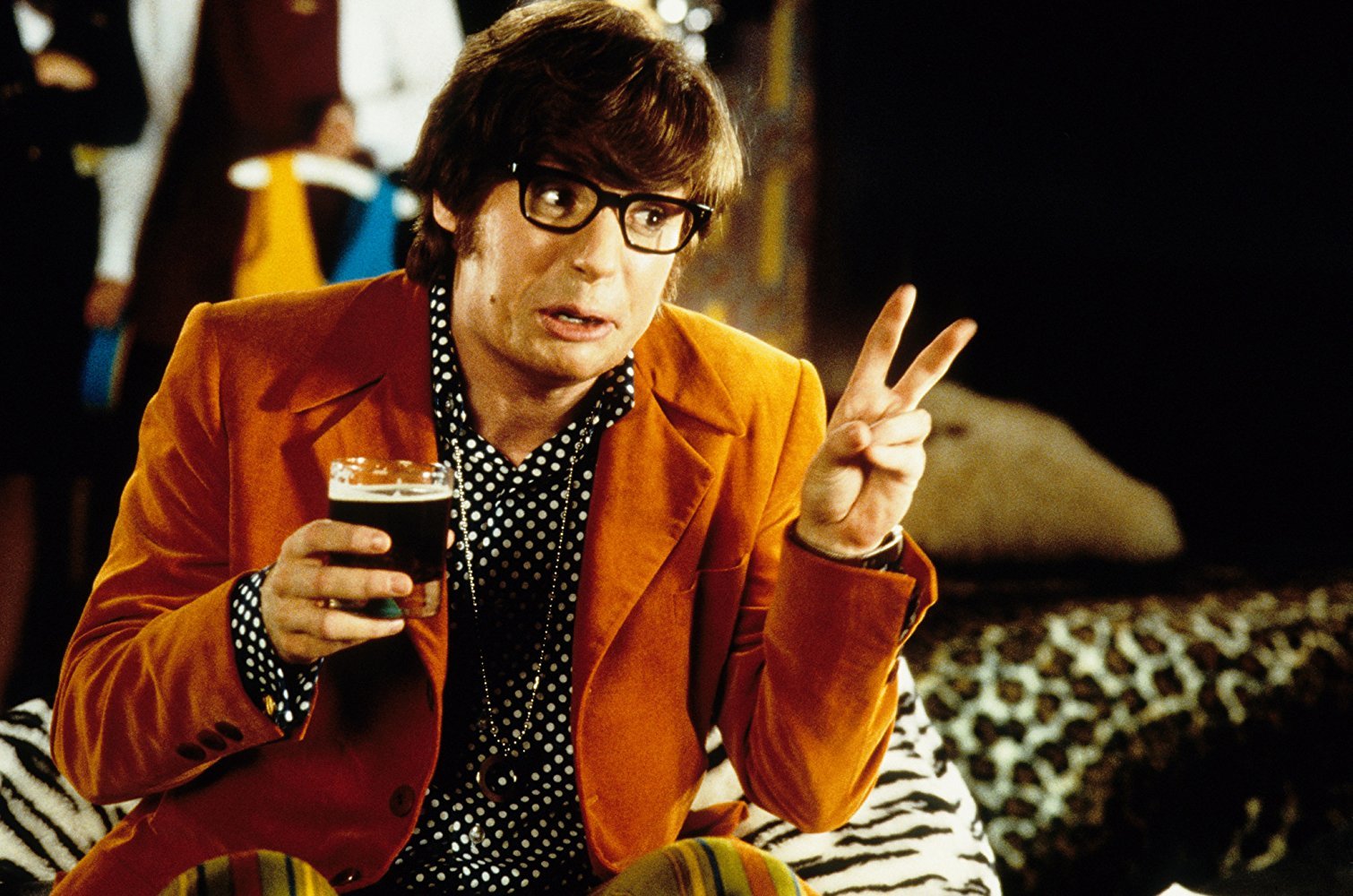 Deep beneath the arid Nevada desert, Austin Powers finally corners his archenemy Dr. Evil in his own secret underground layer. It’s one of the few scenes in the film that isn’t building up to an elaborate comedic set piece. The caricatured antagonist pitches Austin his cynical worldview –that freedom has failed. All of the virtues and indulgences Austin and his youthfully innocent generation once held dear are now viewed as evil; doesn’t that make him the same? Not only has the cultural trajectory failed him, his own generation, now in power, has betrayed their own ideals. Why shouldn’t Austin join the doctorate-holding hairless Belgian and become… evil?

Buried under the cultural references, genre parodies, zeitgeist engulfing catchphrases, and paint-by-numbers world domination plot is the throbbing heart of Austin Powers: International Man of Mystery: a man coming to terms with a changing world in which his values no longer prevail. His grasp on what’s cool, his concepts of sexuality, and his entire relationship with society were literally frozen in time –crystallized in the swinging sixties ideas of misogynist-tilted free love and war-defying counter-culture.

Reintroduced at the end of the 20th century, his warm liquid goo-induced culture shock reflects the powerless unease of many today who feel lost in the blur of the ever-changing mores and values of Western culture. They are frightened and indignant about a world they don’t understand, one in which they are no longer relevant. They become cynical and elitist or, worse yet, conservative. The character Austin Powers embodies the comfort of looking back to one’s glory days as the film surrounds him in references to the familiar, making his youthful experience once again relevant.

Culture is obnoxiously contradictory. It persists, ever-forward, while always looking back with a wistful sigh and smile. In the 1990s, we were over the narcissistic excess of the 1980s and looked back on our psychedelic past with a desire for the “authentic.” Bell bottoms, environmentalism, the Volkswagen Beetle, and more hippie aesthetic came back into vogue.

At the time, Mike Myers was finishing up his stint as a colorful member of the Saturday Night Live cast, embodying beloved characters that hosted things like the Streisand-loving Linda Richman and the stoically German Dieter. Myers springboarded from SNL into the box office with his over-the-top characters: two feature-length versions of the hit sketch Wayne’s World, and the original and beloved, So I Married an Axe Murderer. He formed a 60s retro-mod band called Ming Tea along with Susanna Hoffs of the Bangles and singer/songwriter Matthew Sweet. All the members adopted psychedelic personas, including Myers, who performed as frontman Austin Powers.

Myers said the ‘Man of Mystery’ is a tribute to his father and his father’s cultural influence on him as a young man. Though famously Canadian, Myers’s parents are both from Liverpool and introduced the comedian to James Bond as well as the British music and comedy of the 1960s. The resulting film is a snowball of comedy and culture that spans the second half of the 20th century.

The most overt reference is to the world of British secret agent James Bond. Austin’s blue velvet suit is a Technicolor adaptation of George Lazenby’s in On Her Majesty’s Secret Service. Dr. Evil is styled after Bond’s arch-nemesis Ernst Stavro Blofeld, particularly the one played by Donald Pleasance in You Only Live Twice, down to the bald head, gray Nehru suit, and feline companion. His motivation is a parodied amalgamation of many Bond villains bent on world domination like Karl Stromberg and Hugo Drax. Much of the set design is a budget-friendly knock-off of the work of Sir Ken Adam. Adam production designed much of the Bond series as well as Dr. Strangelove, whose War Room is the basis for the world leaders’ headquarters in the film.

The comedy is a potpourri of the post-war era’s greatest hits as well as a prototype for future comedic styling. The film uses a classic fish out of water scenario but gets to use it twice with both Austin and Dr. Evil, having fun with their aesthetic incongruity. Just as the Zucker brothers did with Airplane! and the Naked Gun franchise, the joke rate in the film is breathless. It’s a Gatling gun of tropes, references, callbacks, and physical comedy that hits the target more often than not. Even the straight-person characters that are used mainly for exposition get the Monty Python treatment that has dry, serious characters saying and doing silly things. The humor is all very sketch-like in that it winks to the audience and does not shy away from a funny, albeit cheap, joke. The dialogue even portends the next major comedic voice, Judd Apatow, with its tangents that take pains to explain or describe specific cultural references. We even get an early taste of Will Ferrell as Mustafa, doing his histrionic, verbose, no inner monologue thing.

Even if you’ve seen it a thousand times and think you know every joke, the sheer density allows for delightful surprises. For me, the k-turn in a hallway bit is perfect and always catches me off guard.

Austin Powers’s most pervasive and lasting contribution is the impact he’s had on our lexicon. The 1990s were rife with quotable comedies thanks largely to Myers and the meteor that was our introduction to Jim Carrey. I remember getting an Austin Powers watch from KB Toys that, yes, told the time but, more importantly, told me a rotation of the film’s catchphrases. Myers had double the pleasure with his two cartoonish characters that each have a long list of phrases that have been laser-etched into the minds of millions. From Austin’s simple “yeah, baby” and “do I make you horny, baby” to Dr. Evil’s elaborate “shhh” bit with his son Scott (Seth Green), quoting was, for better or worse, in its heyday.

The decline in the number of comedies produced, particularly those with cartoon-like leads, has significantly reduced the rate of movie quotes that enter the popular culture patois. The additions of Borat and Ron Burgundy are some of the few that have broken through at a similar level. Whether delivered with a sincere reference or with varying degrees of irony, on a clear night, you can still hear an “oh, behave” 25 years later.

After a quarter-century, Austin Powers: International Man of Mystery is still a smashing way to spend an hour and a half. Myers is clearly having the time of his life, but I have to credit a large part of my enjoyment, coincidentally, to nostalgia. The nostalgia I have for this piece of nostalgia at a time when I am acutely aware of my own growing irrelevance to popular culture.

In the aforementioned scene where Dr. Evil tries to convince Austin to become evil, he engages with the spirit of what he believed the counter-culture was about, what the youth of his generation regarded as important before maturity and the world corrupted their vision. Austin identifies that as adults, there is now a responsibility. To me, that responsibility is to respect and facilitate the sincere and righteous passion of the younger generations; not get angry at them and the changes they bring because it’s a sign of my own irrelevance and mortality. Dr. Evil responds to Austin’s rebuke with a cutting burn: “there’s nothing worse than an aging hipster.” Which is sad but inevitable. The thing is, you only look like a grumpy asshole when you try to disprove it.

Though it may feel like Austin is really just me and a lot of other bitter adults in a nutshell, in actuality, this is me in a nutshell: “Help! I’m in a nutshell! How did I get into this nutshell? Look at the size of this bloody great big nutshell! What sort of shell has a nut like this? This is crazy!”

Attack of the Clones Is Better Than You Think