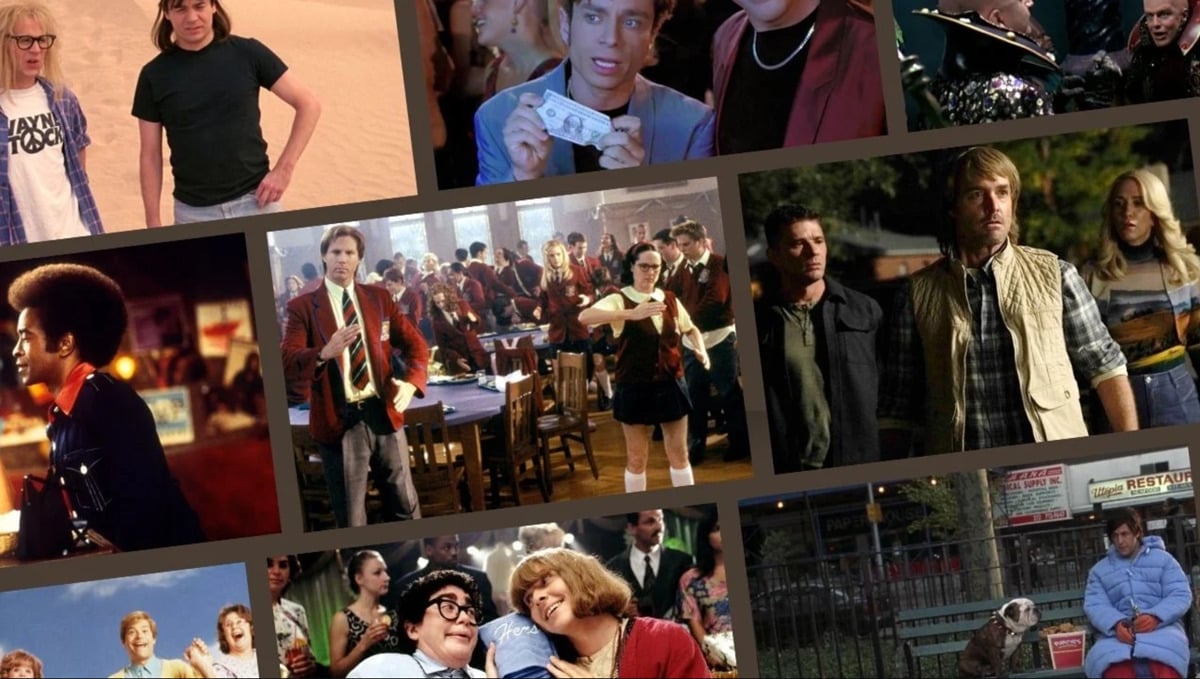 It is hard to believe that creator Lorne Michaels’s legendary late-night variety show Saturday Night Live has been kicking around the American airways for four decades and still remarkably standing on its hind legs even until this very day. No doubt that Saturday Night Live has shaped the pop-cultural minds of its avid viewers for forty-plus years on the small screen. Importantly, SNL gave birth to the careers of some of Hollywood’s major top stars in the realm of film, television, and stage.

Sure, Saturday Night Live is an immense institution in television. In fact, NBC-TV will acknowledge the iconic late-night program when it broadcasts the 40th anniversary highlighting Saturday Night Live’s on-air staying power with many of the show’s luminaries returning and paying retrospect to the classic sketch comedy that became one of America’s most enduring and long-lasting laugh fests.

Unfortunately, SNL has never had the consistent impact in the world of movies as it did on the small screen. Sure, the occasional breakout hits such as The Blue Brothers and Wayne’s World made considerable waves on the big screen for SNL as original televised skits-turned-feature film fodder,  However, when the success of The Blues Brothers translates into the insipid Blues Brothers 2000 then folks…SNL has truly overstayed its welcome at the box office.

Hence, in “Not So Live From New York”: Top Ten Worst Saturday Night Live-Based Feature Films we will take a look at the group of grating SNL movies that made audiences groan and grimace while wishing that their favorite SNL skit characters remained on the boob tube in their living rooms on Saturday nights. Some SNL feature films were more tolerable and receptive than others. Still, mediocrity breeds all degrees of doubt.

The selections for “Not So Live From New York”: Top Ten Worst Saturday Night Live-Based Feature Films are:

THE LOWDOWN: No doubt the butt-shaking Butabi Brothers in Steve and Doug (Will Ferrell and Chris Kattan) were riotous in doses during their kooky club-hopping antics with techno-music blasting in the background within the off-kilter setting of SNL’s confined universe at 30 Rockefeller Center. The bouncy and banal behavior of the Butabi bros was delightfully nonsensical and infectious. However, stretching out their frantic footstep gimmick on the big screen in A Night at the Roxbury proved to be tiring and tedious. The story behind the dancing dunderheads dreaming of owning their own nightclub and getting into dance battles on the floor seemed quite frothy and funny. Sad to say it was not in the long run. The goofy gyrations of Ferrell and Kattan were inspired within a 4-minute sketch…not within an 80-minute finger-snapping farce.

THE LOWDOWN: Many may blame the anemic sequel to the highly popular The Blues Brothers as seriously lacking due to the late John Belushi’s absence. Well, this is partially true but Blue Brothers 2000 had other hindering obstacles that kept it as an uneven, stale copycat reminder of the much-preferred predecessor where Dan Aykroyd and John Belushi ruled over the high-flying hysteria in music and mayhem as Elwood and Joliet Jake Blues. This time Aykroyd’s lone wolf Elwood Blues must go on another “mission from God” and round up the band for charitable reasons. Roseanne star and multiple SNL host John Goodman and others came on board to don Blues-esque wardrobe and shades and accompany Aykroyd in a bid for more boisterous blues. However, it was not meant to be as the forgettable musical mishap Blues Brothers 2000 hit its last sour note.

THE LOWDOWN: In the classic days of SNL from the 70′s America’s favorite alien family from “France” in the Coneheads entertained viewers in a nutty fashion when they were featured frequently on the show.  Dan Aykroyd, Jane Curtain and Lorraine Newman made up the terrestrial trio as they tried to infiltrate human life on Earth, Almost two decades later Aykroyd and Curtain (sans Newman) reunited as Beldar and Prymatt in the flimsy sci-fi farce The Coneheads from the early 90′s. It was great to see the Coneheads once again but their director Steve Barron (as well as co-screenwriter Aykroyd) never provided anything fresh or zany in a big feature film that SNL captured in a carefree, refreshingly silly skit. The Coneheads were definitely out of this world with this clunky comedy that hampered their return to our comedic consciousness.

THE LOWDOWN: Pat Riley (as played by Julia Sweeney) was a walking androgynous question mark on SNL. She (or is it a he?) was an ongoing riddle as observers tried guessing who or what Pat was sexually? Everything from Pat’s unisex moniker to her physical presence kept people wondering about this non-descriptive individual standing before them. It was an SNL running joke that worked fabulously and gave Sweeney a steady platform as a female performer on the show. It also helped that Pat Riley shared a famous name with a certain NBA championship-winning head coach for the Los Angeles Lakers. But much like so many SNL sketch characters Pat just did not translate accordingly on the big screen as the meager material was not there to support the subtle outrageous nuances of Sweeney’s head-scratching “he-she”. Being Pat in the world of SNL’s high-spirited universe was ideal. But Sweeney’s bizarre characterization in the movie was just simply pat.

THE LOWDOWN: On SNL the smooth-talking, lady-killer radio host Leon Phelps (Tim Meadows) was as hilarious as he was debonair in his approach to charming the chicks with his romantic reassurances. This was the perfect comic characterization to assign the handsome Meadows during his long-running stint as a cast member of the stalwart sketch comedy. Director Reginald Hudlin decided to adapt Meadows’s cool-as-ice chick magnet for the movies thus resulting in the mixed bag comedy The Ladies Man. The exploits of the ebony advice-giving Lothario had an interesting premise for comedy gold but it somehow just turned into chuckling rust. Even the winking inclusion of big-screen aging hunk Billy Dee Williams to drive home the point about iconic suave pretty boys throbbing feminine hormones everywhere never really registered with any gusto.

THE LOWDOWN: Okay, including Little Nicky may be a stretch to some people who would argue that Adam Sandler’s on-screen devilish dunce Nicky was NEVER an SNL character creation that originated from television. And they would be correct in making that statement about Sandler’s noxious Nicky not really fitting the theme of this particular article. Instead, Little Nicky represents the SNL alum, Adam Sandler, for simply being one of the worst offenders from the program to continuously make woefully sophomoric flicks as if they were going out of style and epitomizing the art of junk fratboy cinema on an idiotic impulse. Yeah, Sandler and his moronic movies are an acquired taste and a few of them inexplicably made insane money at the box office. Had the likes of Little Nicky appeared on SNL then still was commissioned to be turned into a featured film then hey…you would not be blamed for questioning the end of the apocalypse…that’s for darn sure.

THE LOWDOWN: To be fair McGruber is not necessarily one of the most hideous of the SNL skit characters to ever hit the big screen, In fact, Will Forte’s inept former special operative McGuber was a scream both on SNL and on the big screen in his lengthy, cockeyed adventures. But the old saying that less is more certainly comes true when weighing in on McGuber’s mischievous effectiveness. On SNL the numerous serving of 2-minute snippets featuring the exasperating McGuber (a funny spoof of nostalgic television’s resilient mechanical mastermind MacGyver) trying to defuse a bomb (and failing) with his associate Vicki St. Elmo (fellow SNL alum Kristen Wiig) was repeatedly hysterical. It was instant and insane and hit the mark of gleeful craziness. As a movie, McGruber was merely reduced to being another manufactured misfit overstaying his welcome from a stable of leftover SNL stock personalities.

THE LOWDOWN: Nowadays former SNL writer/performer Al Franken represents his home state of Minnesota as a U.S. senator in the nation’s capital of Washington DC. However, two decades ago he premiered on the big screen while bringing his SNL character in self-help guru Stuart Smalley to movie theaters in the Harold Ramis-directed Stuart Saves His Family. As the sweetly sweater-wearing inspirational speaker on SNL one could not avoid cracking up at Franken’s straw-haired cheerleader telling his famous guests to like and believe in themselves (SNL host in pro basketball champ Michael Jordan could not contain his laughter in one memorable Stuart Smalley skit) Unfortunately, Franken couldn’t save his family or anybody else in this flaccid farce that failed to make Stuart Smalley’s “golly gee” spiritual insights palpable for genuine cinematic chuckles.

THE LOWDOWN: Truly Molly Shannon belongs on the Mount Rushmore of SNL’s greatest female talent ever to emerge from the late-night phenomenon. Shannon does not get the proper credit that the likes of the late Gilda Radner, Tina Fey, Amy Poehler, Kristen Wiig, or even Maya Rudolph demand. Shannon’s fidgety Catholic schoolgirl Mary Katherine Gallagher was certainly a convincing hoot when gracing the SNL stage with her hyperactive mannerisms from sniffing her fingers with underarm scents to crashing into church chairs with frenzied force. Never has one laughed so hard watching the nerdy underdog Mary Katherine Gallagher capture the spotlight in her klutzy, endearing way. The movie vehicle Superstar and Shannon’s Mary Katherine Gallagher should have become as recognizable as the more successful SNL skit characters on record, Superstar was understandably dismissive at the box office but no one should deny Shannon’s jittery Catholic cutie with clumsy ambitions for stardom.

THE LOWDOWN: When Wayne Campbell (Mike Myers) and his sidekick Garth (Dana Carvey) told viewers to “rock on” in their solidly amusing SNL sketches as Midwestern metalheads co-hosting a cable access TV show in the basement they created a sensation on the show. When the movies came calling for Wayne’s World the floodgates were open for Myers and Carvey to continue their exploits beyond the walls of SNL’s studios and it worked creatively. Now as for Wayne’s World 2…well let’s just say that Myers, Carvey and the handlers went to the well once too often. Wayne’s World 2 still had their avid followers from SNL and the first Wayne’s World movie. However, the second time around was a hollow and simplistic regurgitation of the long-haired rock rogues with the familiar catchphrases and head-banging shtick. For Wayne’s World 2 we say “rock off” to Wayne and Garth.