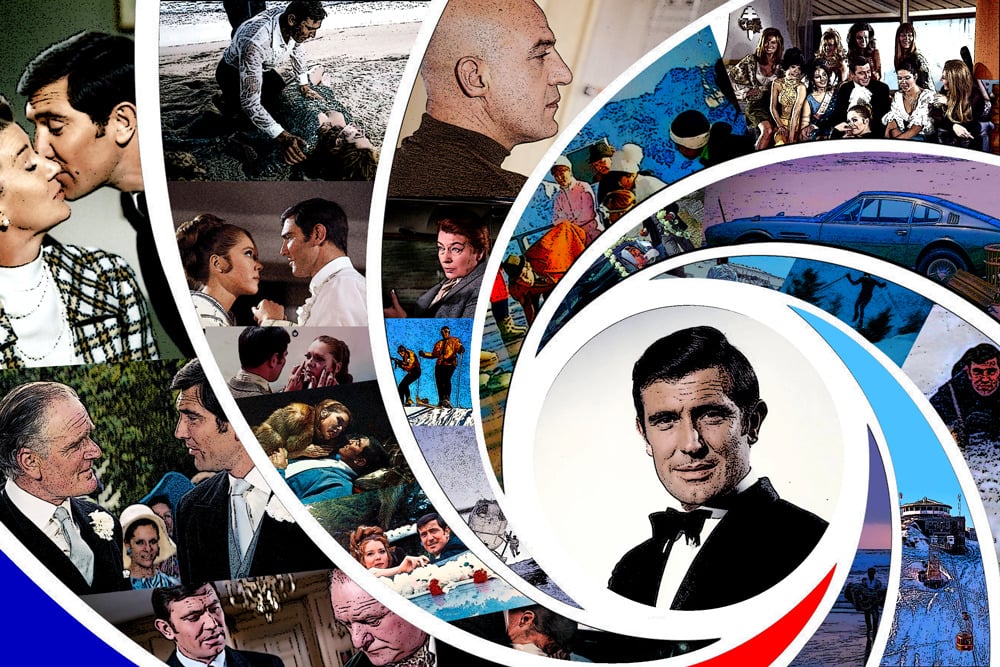 007 Spotlight: On Her Majesty’s Secret Service

To call On Her Majesty’s Secret Service underappreciated is to call the sky blue. Only later with the release of Daniel Craig’s introduction to the series, Casino Royale, has OHMSS begun to be reappraised as a realistic, character-driven approach to the Bond series. Its failure at the box office compared to the Connery entries that preceded it led to the producers, Albert “Cubby” Broccoli and Harry Salzman, returning to the Goldfinger formula of larger than life villains, iconic henchmen, ludicrously elaborate take-over-the-world schemes, and a generally heightened sense to the proceedings, all of which are noticeably absent from OHMSS.

Sean Connery had a rough experience during filming of 1967’s You Only Live Twice. The media scrutiny, long filming periods, and promotional duties caused him to leave the role that had made his career. The producing team drew up a list of names including future Bond Timothy Dalton, who was twenty-four at the time and felt he lacked the maturity for the role. Eventually they discovered Australian model George Lazenby, who was given a contract for one film with options for more down the line. However, Lazenby never felt comfortable with the role and declined to pick up his option once filming concluded, thus making OHMSS an unusual, odd entry for many fans as Lazenby’s sole Bond outing.

The film’s plot concerns James Bond’s hunt for Ernst Stavro Blofeld, the nefarious head of SPECTRE who escaped at the end of You Only Live Twice. Bond’s initial encounters with a mysterious Countess lead him to her father, who offers information on Blofeld’s whereabouts if Bond will consent to the courtship of his daughter. As the romance blossoms (and it’s a real romance, a first for the series), Bond’s pursuit of Blofeld leads him to the latter’s snowbound Swiss fortress and a plot involving allergy patients and bacteriological warfare. The adventure is also one of the series’ longest, clocking in at an epic but never tiring 140 minutes.

Director Peter Hunt had been the supervising editor on the first five films, and his direction sparks the series in a way that hadn’t been present up to that point. Undercranking during action scenes. A teaser featuring a brawl on a beach shot at magic hour to glorious effect. A lilting montage set to the strains of the beautiful “We Have All The Time In The World” sung by “Satchmo” himself, Louis Armstrong. These features and more set On Her Majesty’s Secret Service apart from the Bond films that surround it.

Lazenby isn’t at Connery’s level. That much cannot be disputed. Where he does shine, however, are in the love scenes with the future Dame Diana Rigg, who brings an intelligence, grace, and ferocity to Countess Tracy Di Vincenzo, the only Mrs. Bond in the series to date. Director Hunt carried an earmarked copy of the Ian Fleming novel with him at all times during shooting, and the film is the closest adaptation to the source the series will probably ever see. (Spoilers herein.) The heartbreaking ending, in which Tracy is murdered directly after her wedding to James by Blofeld and his terrifying henchman Irma Bunt, is culled directly from the book, and packs a gut punch the likes of which would not be felt again until Casino Royale (2006), itself hewing close to the tragic final moments of the initial Bond novel. (End spoilers.)

Special mention must be reserved for the action sequences. Michael Reed’s location photography in the ski and bobsled chases, the opening fight on the sands of Portugal, and the testosterone-pumping helicopter assault on Blofeld’s Piz Gloria fortress is nothing short of remarkable. While the rear-projection is noticeable as ever on the film’s recent Blu-ray release, so little of it is sprinkled into the action that it becomes quite easy to ignore.

Series stalwarts Bernard Lee, Desmond Llewelyn, and Lois Maxwell contribute welcome comedic beats and meaningful moments for longtime fans, while Gabriele Ferzetti’s portrayal of Tracy’s father, the crime boss Marc Ange Draco, is a marvelous addition to the gallery of Bond allies tracing back to the magnificent Pedro Armendariz as Kerim Bey in From Russia With Love. Telly Savalas, replacing Donald Pleasance as Blofeld, loses the facial scar and (sorry Kojak fans) consumes nary a lollipop, but is nonetheless a malevolent and worthy opponent to 007, aided ably by Ilse Steppat as the chilling and deadly Irma Bunt.

John Barry’s score is perhaps the best of the entire series, incorporating a new action theme into the opening credits, and saving the film’s “Bond Song,” the aforementioned Louis Armstrong ballad, for that key romantic montage at the end of the character-building first act. Barry expertly ladles the instrumental version of the love theme under the film’s most melancholy moments, to heartbreaking result. It’s a truly magnificent aural experience, and aids the film’s underrated reputation immeasurably.

Seen as an outlier by most due to Lazenby’s stiff, one-and-done portrayal of the world’s most famous secret agent, On Her Majesty’s Secret Service reveals itself as one of the greatest of Bond films upon a second look. One can only hope its reputation grows as the more realistic, character-driven modern series of Daniel Craig portrayals becomes increasingly popular. To seek out OHMSS is to experience a challenging, invigorating and romantic piece of action filmmaking that deserves a higher place of honor in the world’s best-known film series.

Casino Royale is Bond at his Badass Best

TIFF 2021: Sigourney Weaver Gets a Fantastic Role in Drama, The Good House