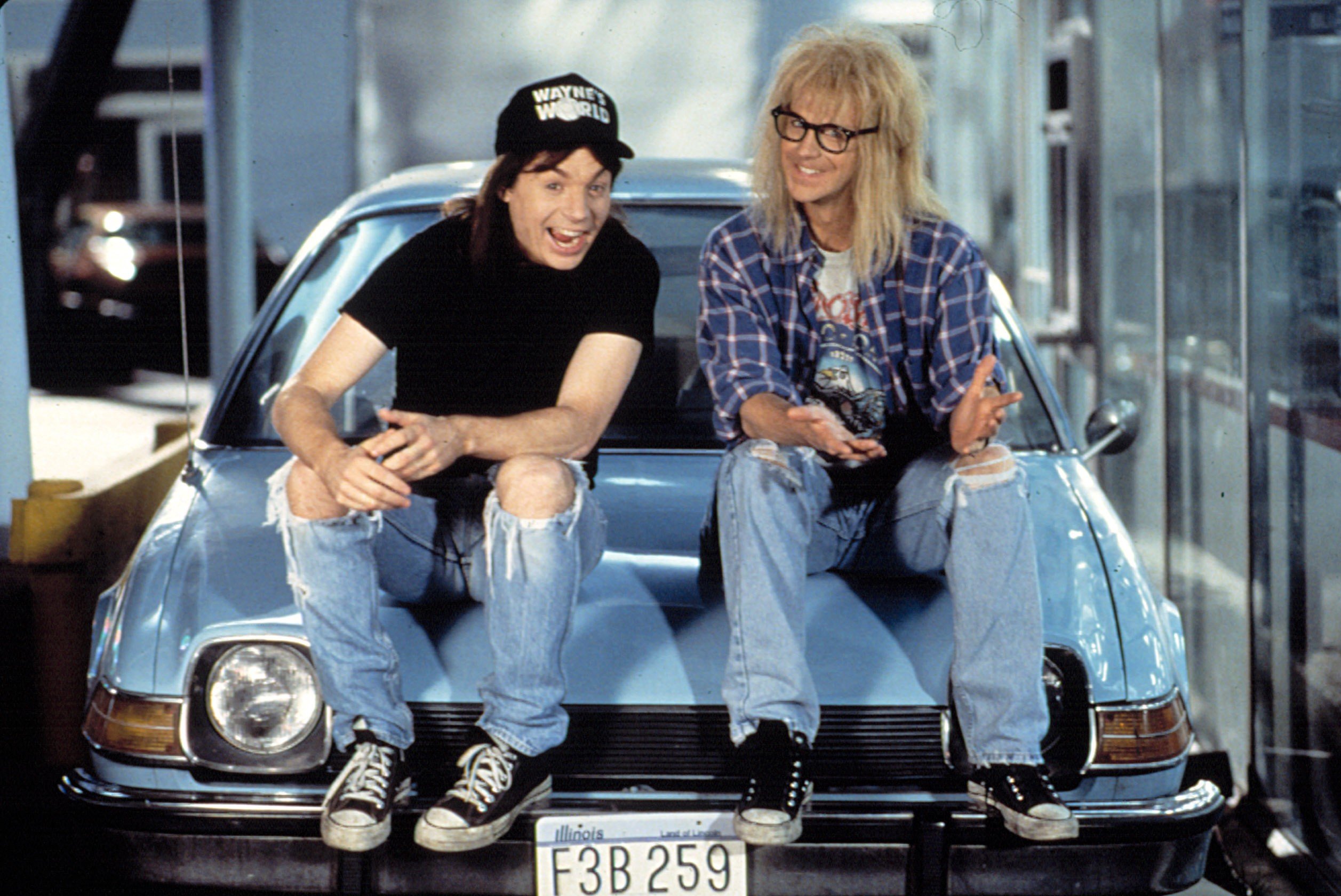 Wayne’s World, the hit comedy movie starring Mike Myers and Dana Carvey, is one of the stranger popular movies of the 1990s. The film, which arrived in February of 1992 — 30 years ago this week — is in the top tier of movies derived from Saturday Night Live, up there with The Blues Brothers. It’s a strange but delightful mix of timeliness, timelessness, and cultural specificity of the wrong time.

Directed by Penelope Spheeris, Wayne’s World starred Myers and Carvey as Wayne and Garth, the teenage hosts of a popular public access show that spawned about a dozen catchphrases (“Schwing,” “not,” “and monkeys might fly out of my butt,” and numerous others.) The characters predated SNL, with Myers debuting them in Canada on a show called It’s Only Rock and Roll, but at 30 Rock was where they broke through.

The SNL sketches were almost entirely set within Wayne and Garth’s rock ‘n’ roll public access show, but the movie spreads out to put the characters in the real world, within a plot in which an evil TV executive (Rob Lowe) tries to take over and exploit their show.

It’s not surprising that Wayne’s World was a hit or that it endured. The movie is hilarious, built around the charm and humor of these characters, and successfully transitioning them to the world outside Wayne’s parents’ basement. Its conceit, of self-starting creators in a nontraditional medium struggling with whether to shift to the mainstream, was prescient of a great deal of subsequent discourse about YouTubers and other creators that would follow in the Internet era.

The film features an extremely 1990s plot about how terrible it is to sell out. But when it came to time, there were quite a few things about the show, and movie, that didn’t quite add up when it came to time Myers and Carvey were playing teenagers in the early 1990s, but Myers was 28 when the movie came out, while Carvey was 36.

The movie came out in the middle of the grunge era, but Wayne and Garth’s musical tastes tended towards those of someone who grew up in the 1970s and ’80s and was partial to Led Zeppelin, Jimi Hendrix, Aerosmith, and other music that Myers, creator of the characters and co-writer of the movie, was probably into himself when he was a teenager. Despite living in Aurora, Ill., the characters also loved hockey, as did the Toronto-born Mike Myers. And the characters talk frequently about “partying,” without ever specifically referencing drinking, drugs, or sex.

But Wayne’s World was a big enough hit that it got a sequel nearly instantly, with Wayne’s World 2 arriving in December of 1993. That one almost entirely was based on boomer jokes from the late 1960s and ’70s, riffing on Jim Morrison and the Village People, before closing things out with an extended parody of The Graduate. That was the end of the franchise, although Wayne and Garth pop up occasionally on SNL reunions and even in a recent UberEats commercial. But of all that, the first movie is the best we ever saw of Wayne and Garth.

This month’s anniversary of Wayne’s World is being celebrated with the 30th anniversary “Party On” edition Blu-ray.

A Liter O’ Cola for Super Troopers, on the 20th Anniversary

Cabaret at 50: The Exhilarating Story of Berlin Before the Fall