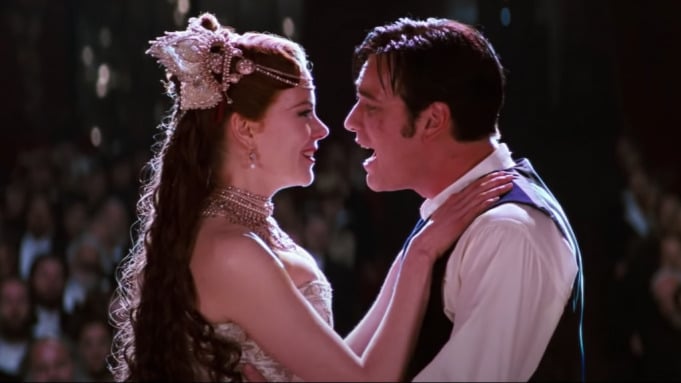 Moulin Rouge!, which was released in theaters 20 years this week, is probably the quintessential movie in the career of director Baz Luhrmann. Between the grandiose story, the colorful palette, the ambitious production design, and the musical and dance numbers, Moulin Rouge! is  Baz Luhrmann at his Baz Luhrmann-ist. It’s also the best movie he’s ever directed, even to this day.

Moulin Rouge!, which the director co-wrote with Craig Pearce, was part of the early-2000s trend, both in movies and on Broadway, of the “jukebox musical,” a musical in which most of the songs aren’t originals but rather pop standards. The film included mid-to-late 20th century songs from the likes of David Bowie, Queen, Madonna, and Nat “King” Cole, even though the action was set around the year 1900.

Like Midnight in Paris, another film celebrating an anniversary this month, Moulin Rouge! is based on fantasies of a Paris of the mythical past, with a few real-life historical figures sprinkled in.

Nicole Kidman starred in the film as Satine, a dancer at the titular cabaret. Ewan McGregor played Christian, a writer who’s introduced looking back on their doomed love affair. The Duke (Richard Roxburgh) is the villainous romantic rival, while John Leguizamo played the real-life artist Henri Toulouse-Lautrec.

Moulin Rouge! earned $179.2 million at the box office, becoming the first hit musical in several years. It was nominated for eight Oscars and won two, for Best Art Direction and Best Costume Design.

A look at the film’s best scenes:

There was the “Diamonds Are a Girl’s Best Friends” number by Kidman, which Whoopi Goldberg parodied when she hosted the Oscars that year:

In “Silly Love Songs,” the two stars cycle through several such songs, including the Paul McCartney tune of the title:

Then there was the film’s finale, which reprised “Come What May”:

It’s not a musical number, but I always appreciated Toulouse’s speech about love:

And of course, there’s a scene not in a movie, but rather the memorable music video for the all-star cover of “Lady Marmalade” that was in heavy MTV rotation back in the spring and summer of 2001:

Mission: Impossible was an Unusually Quiet Start to a Noisy Franchise

Top Gun: One of the Most Important Movies of the 1980s