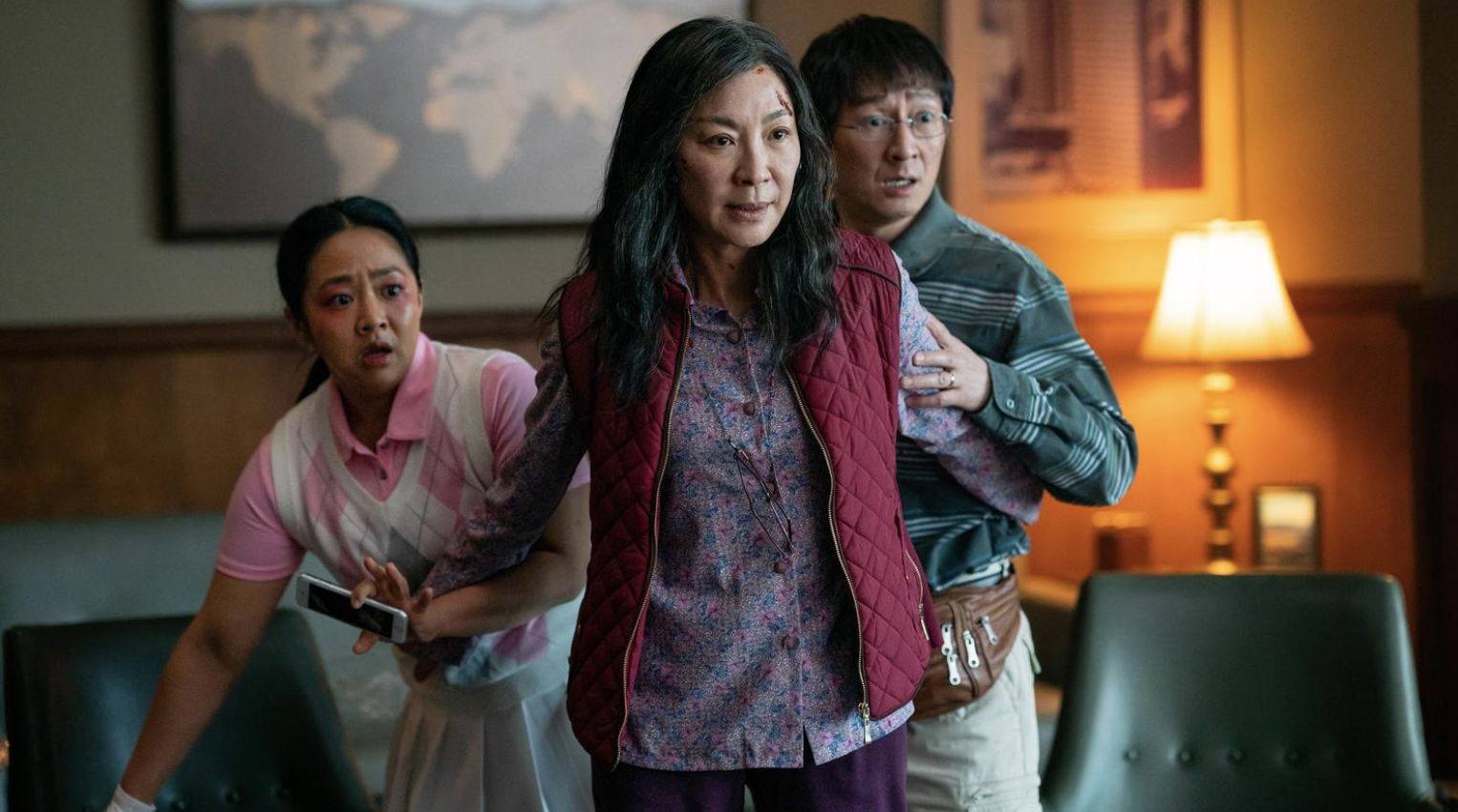 Everything Everywhere All at Once Review

The new film Everything Everywhere All at Once is one with a rather high degree of difficulty. Multiverse storytelling can be very hard to do without confusing the audience, especially when it comes to conveying emotional stakes. Also, the movie is seeking, within this conceit, to convey dozens of different ideas.

I’m pleased to find that Everything Everywhere All at Once is a nearly complete triumph. It uses this nontraditional storytelling technique to successfully develop all of its ideas while allowing each of its talented cast members to play multiple unique characters. It’s at once an emotionally affecting family story, a visually stunning marvel, a sidesplittingly hilarious comedy, and the best martial arts movie in recent memory.

The A24 release is the latest film from the writer/director duo of Dan Kwan and Daniel Scheinert, known as “Daniels.” Their previous feature as a team was 2016’s Swiss Army Man, better known as “the Daniel Radcliffe farting corpse movie,” which ironically was a movie I absolutely despised. I did really enjoy Scheinert’s solo directing outing, 2019’s The Death of Dick Long, mostly for its crazy audacity.

Everything Everywhere All at Once premiered at South by Southwest, opens in New York and Los Angeles on March 25, and goes wide April 8, even though some wag on Twitter correctly noted that a movie with his title should really be opening everywhere all at once. At any rate, it’s easily the best movie of 2022 to date.

The story of Everything Everywhere All at Once has a lot of fantastic easter eggs and surprises that I won’t spoil, so I’ll stick to broad strokes: For its first 15 minutes or so, the film appears to be an earnest drama about a Chinese immigrant family.

Michelle Yeoh plays Evelyn Wang, a Chinese-American woman whose family owns a laundromat. She and her husband, Waymond (Ke Huy Quan) appear on the verge of divorce, while she also has apparently dicey relationships with her lesbian daughter Joy (Stephanie Hsu) and her elderly father Gong Gong (James Hong.) She’s also facing an audit from a suspiciously aggressive IRS agent (Jamie Lee Curtis.)

At this point, the film suddenly makes clear that Evelyn exists in numerous alternate universes, based on different directions her life may have gone. Much as this seems like it could lead to a mess of a film, the Daniels actually establish the rules of what’s going on relatively early. And even more impressively, they allow the story to jump around in a way that conveys serious emotional stakes.

But at the same time, the film also milks this premise for some absolutely sidesplitting laughs. It has a sense of humor that’s very juvenile at times — one gag involves butt plugs — and deeply silly at others. There are also a half dozen ingeniously blocked fight scenes. The first of them, involving Waymond strategically deploying a fanny pack, is going to be instantly legendary.

There are hints of The Matrix, and also Inception, and likely direct homages to quite a few different Kung Fu movies.

Once again, I won’t give away individual surprises, except to praise a dynamite homage to Ratatouille, as well as some references to Yeoh’s own screen persona, and the quoting of a certain obscure pop song from the early 2000s. Among other great things, the film allows the actors to each play multiple characters, each with different personalities, costumes, and talents.

The top of the cast features a wildly eclectic group of Asian and Asian-American actors. Yeoh’s reputation precedes her, from a 40-year career that’s gone from Hong Kong to a James Bond film to Crouching Tiger, Hidden Dragon to Crazy Rich Asians. She ably anchors the film.

Ke Huy Quan’s career began around the same time as Yeoh’s, and you may remember him as Short Round in Indiana Jones and the Temple of Doom and Data in The Goonies, as well as his part on the sitcom Head of the Class. Then, he essentially left acting for 25 years, before returning recently. His first transition from his character in one universe to another may be the film’s best moment.

The 93-year-old James Hong has been acting since the early 1950s, one everything from Big Trouble in Little China to Blade Runner to the Chinese restaurant episode of Seinfeld. Following his recent voice role in Turning Red, Hong is outstanding as an elderly man whose degree of infirmity varies depending on the universe.

The young actress Stephanie Hsu was a bright spot of the middling most recent season of The Marvelous Mrs. Maisel as Mei, Joel’s new girlfriend, and here she walks off with several scenes as Joy, and several alternate versions of Joy. And Harry Shum, Jr., who was on Glee and since been in a few movies, has a small but memorable part as a chef.

Tallie Medel, who starred a couple of years ago in a great, little-scene indie movie called Fourteen, shines in a small part as Joy’s girlfriend, while Biff Wiff — the brutal Santa Claus cop from I Think You Should Leave — turns up here as well, in a film that’s even more of a “cosmic gumbo” than Detective Crashmore.

Jenny Slate also appears briefly as a laundromat customer.  That Slate’s character is only referred to as “Big Nose” has a minor whiff of anti-Semitism to it, albeit more by the character than the film, although my complaint is more that the film didn’t do more with a talent like Slate.

We hear a lot these days about how movies are never original and never take chances or risks. This argument is somewhat overstated, but it’s especially wrong when it comes to Everything Everywhere at Once, which does nothing but take risks, and has nearly all of them pay off gloriously.

Watch Everything Everywhere All at Once