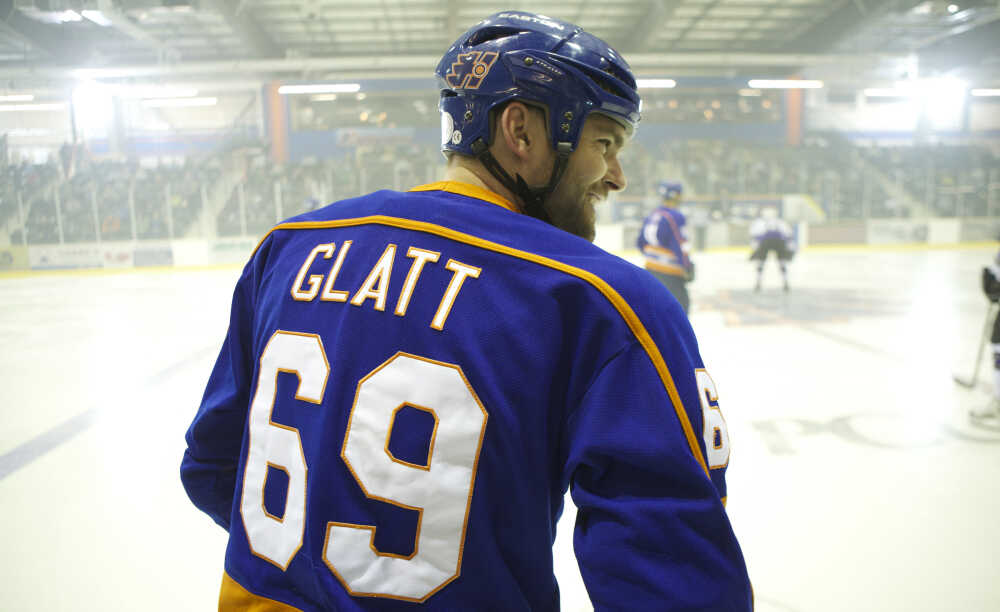 A sports theme film will more often than not do two specific things. First, it will share the story of either an individual or a team, considered to be the underdogs against the clearly more powerful and skilled opposition, who overcomes its deficiencies, rising to the occasion with a triumph against all odds. It may be unexpected within the world of the movie, but audiences have seen this story before.

The second thing a sports film will often do is aggrandize, mythologize and render holier than the holiest of things the sport being depicted. The Michael Dowse film Goon only adheres to the first of these two storytelling techniques faithfully. The second, while dabbled with, feels more honest given that the movie presents hockey as it really is in the eyes of many: incessantly violent and terribly crass.

Doug Glatt (Sean William Scott) is a bouncer for a bar in Minnesota. His direction in life, unlike that of his father and brother (Eugene Levy and David Paektau), both doctors, is aimless. He is not very bright and has yet to discover his vocation in life. All of this changes dramatically one night when he and his best friend (Jay Barucehl) attend a lower level hockey game, during which event Doug engages in a fight with one of the visiting team’s players. Actually, describing the encounter as a ‘fight’ would be an inaccuracy. Doug completely pummels the poor fellow, which catches the eye of the home team coach (Gordon Campbell), who hires Doug as an enforcer. When Doug’s stardom begins to rise, he is transferred to an official minor league team in Halifax, managed by his current mentor’s brother (Kim Coates). It is there that the challenges of hockey and life are thrust into high gear. The Halifax Highlanders are desperately challenging for the final available playoff spot, Doug meets the girl of his dreams in Eva (Allison Pill), his roommate is reckless teammate Xavier Laflamme (Marc-André Grondin) and the shadow of legendary enforcer Ross Rhea (Liev Schreiber), fast approaching retirement, looms large over Doug’s bloody accomplishments.

If there is at least one aspect to Goon that sets it apart from the ocean of other sports movies, it is the aforementioned reality that it fully recognizes the nonsensical brutality of the sport depicted. In fact, one can make the case that it goes the extra distance in accepting it, nay, embracing it with open arms. This speaks to the (unfortunate) truth about Canada’s most beloved sport: that people, in reality, love the fact that it is ridiculously violent. Goon has no qualms about the matter, showing off how intensely high octane and testosterone-fuelled the sport is. It seems fair to state that Goon features many more cuts to hits and brawls than it does cuts to skillful skating and goals. In a twisted way, therein lies the source of the film’s comedic value, the fact that the sport is often so brutish, so vile, and to find inspiration from that, in a film at the very least, creates a sense of hilarity. Is Goon admitting that the entire hockey culture is nothing more than a sick joke? Given that director, Dowse probably does not want to alienate Canadian moviegoers, where the film has received a blockbuster-type marketing campaign, the safe and logical answer is no. Nevertheless, there is something deliciously ironic in the way the movie creates sincere comedy out of hockey’s sincere blood lust. The film never apologizes for the sport nor are there any dialogue exchanges between characters which that explain or elucidate the audience as to any ‘higher meaning’ for players’ behaviour. They fight, they enforce and they protect their teammates, simple as that. It is funny because it is all so ridiculous. It is funny because it frequently defies logic. The movie understands this reality and plays with it.

Those heading into the film whose exposure was limited to some trailers and television ads should perhaps be giving a critical warning: Goon is awash in vulgarity. Some may recall that ESPN produced a revealing documentary a couple of years ago which offered viewers an inside look at two NHL teams, the Pittsburgh Penguins and Washington Capitals. Even though the foul language was censored in order for the dialogue to be palatable for more sensitive viewers, there was no chance the show could avoid the fact that these players simply launched onslaughts of insults all game long, insulting each other more rapidly than they could breathe. Goon‘s script, written by co-star Jay Baruchel and screenwriter Evan Goldberg, inserts a cuss into every second phrase, maybe every second word. It is, therefore, in the dialogue that the film stumbles to a degree. Merely featuring foul language is not problematic. Many of the people involved in the story are not presented as especially smart or educated, hence hearing their exchanges handicapped by limited vocabulary is not a surprise. The consistency and amount does of vulgarity grow to be a bit much after a while, however. Make no mistake, an explosion of f-bombs can be hysterical (and is, at times, in Goon), but one can detect the screenwriters intentionally trying to push the envelope just for the sake of it in certain scenes.

Despite however many cuss words characters can toss out in a single minute like a machine gun firing bullets, the cast is uniformly entertaining, with special mention going to the two at the heart of the film’s love angle, Sean William Scott and Allison Pill. Scott plays a calmer, friendly version of his American Pie character, someone who is not smart but at least wants to do something people can appreciate him for. He stutters through lines because of his character’s nervousness, melts like butter in front of Eva, but brings on the pain when called upon on the ice because that is what he is good at. It is a very silly role, but one that benefits from a nice performance from Scott, who finds a way, somehow, to inject a bit of heart into what could have been an egregiously boring character. Pill also delivers some fine acting, playing the part of a girl who ‘digs hockey players’, who is frankly a little bit slutty (pardon the term, but she admits to it) but is currently spoken for. The two do indeed have some chemistry, even though it is not the sort of chemistry people who enjoy romances are probably used to.

Goon cherishes everything people criticize the sport for, and, while it may not leave the fight unscathed, it is still standing by the time the end credits roll.