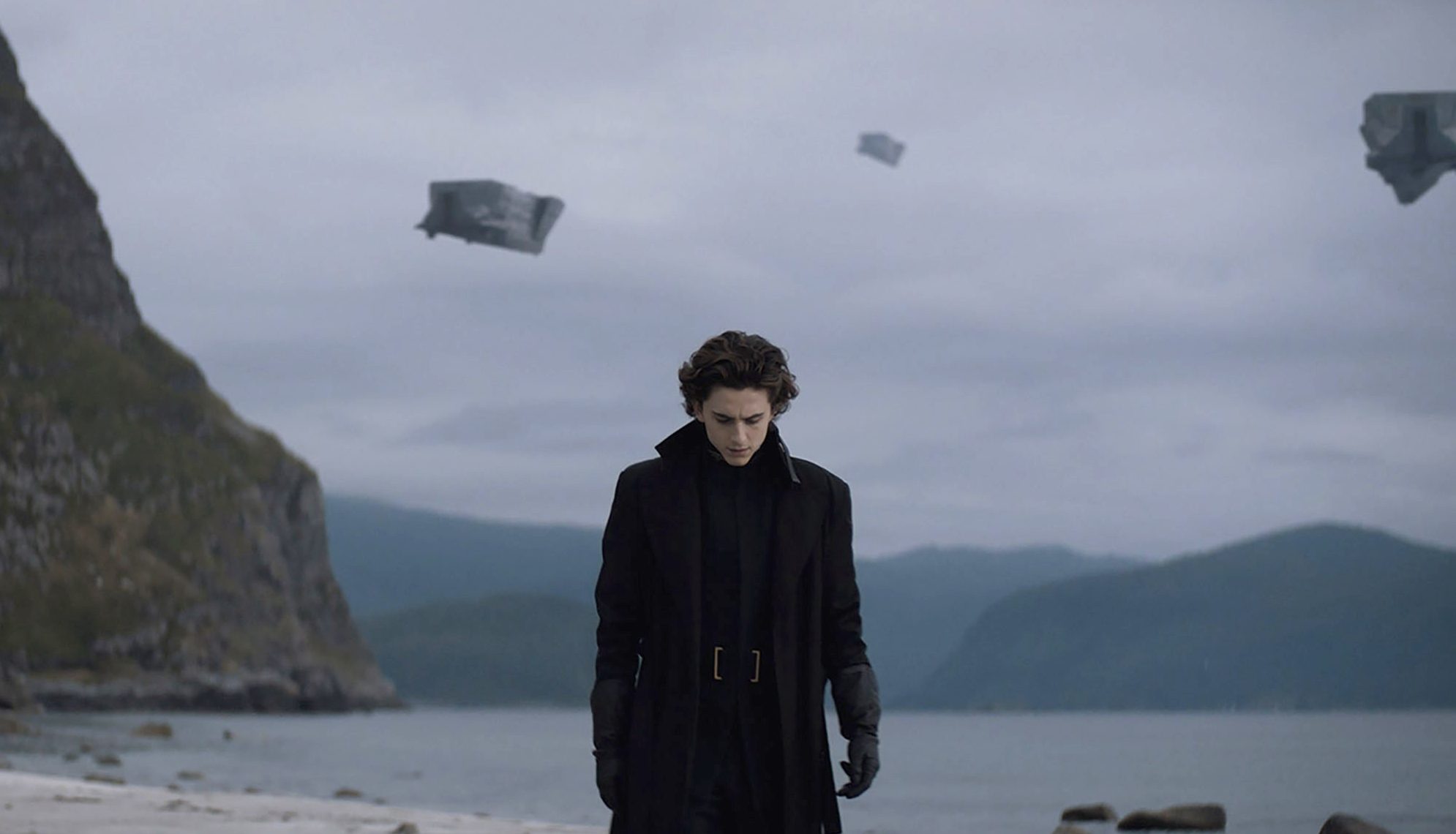 A young man is destined for great things. It’s a set up so commonplace that we rarely give it a second look. Within fantasy and science fiction, it’s even more expected. Which is why Dune has always stood out from the rest. Frank Herbert’s novel is filled with political intrigue between warring houses and wondrous worlds that feel fully lived in. Yet at the center of it is Paul Atreides (Timothée Chalamet) and his journey to find his own path through life despite many hands guiding him through it. As much a philosophical coming-of-age tale as an epic political science fiction and fantasy story, Denis Villeneuve’s adaptation of Dune is a wonder to behold and fully realizes a universe that beyond its massive scale and otherworldly creations is subject to the same human problems that exist today.

Those unfamiliar with Herbert’s novel may find themselves at a slight disadvantage when they begin watching Dune. Villeneuve goes the same route as Peter Jackson did with The Lord of the Rings adaptations and does not hold the audience’s hand until terms like ‘Gom Jabbar’, ‘Kwisatz Haderach’, and ‘Shai-Hulud’ are beaten into their brains before moving on. Instead, Villeneuve lets these terms wash over the audience, sinking in if they do but moving on if they don’t. The term isn’t crucial to understand right away, it’s what it represents that matters most.

Dune follows Paul as he and the rest of House Atreides leave their home planet of Caladan to accept stewardship over planet Arrakis and oversee the manufacturing of the galaxy’s most important resource: spice. Complications ensue when they arrive on the planet and find that the previous owners, House Harkonnen, have left them with a barely operable spice operation. While House Atreides attempts to get their mining operation back on its feet, plans are set in motion that will have massive ramifications to everyone involved.

When people talk about Dune they always bring up the story’s devotion to spice. Why is spice so damn important? Well, the film gives a succinct explanation: it powers everything. Transplanted to modern society, that resource could just as easily be oil or water. Something to be hoarded and privatized. Villeneuve doesn’t spend too much time on the importance of spice other than reiterating how crucial it is that everything runs smoothly so the universe can run smoothly.

Instead, where Villeneuve centers Dune is on Paul and the many forces attempting to shepherd him in different directions. He’s heir to the throne and will succeed his father, Duke Leto Atreides (Oscar Isaac), but is also being trained by his mother, Lady Jessica (Rebecca Ferguson), to harness the power of the ‘Voice’ and hopefully become the Chosen One, or the Kwisatz Haderach, as instructed by the all-female religious organization known as the Bene Gesserit. Then there are these dreams that Paul continues to have of a girl (Zendaya) on Arrakis that suggests a different path than the two he is being led on.

There’s a reason Dune was largely considered unadaptable and it’s immediately evident when you try to explain the plot to someone. It’s a story with many characters, all of which have a significant role to play, even if their character seems minor. It’s the kind of intricate web where it’s almost impossible to follow along completely because everyone has their own motivations guiding them. When you take into account that the opening title card of this film reads “Dune Part One”, it’s clear that Villeneuve had to make the conscious decision to split the book into two parts when adapting it to film. There’s just no way to take a book that dense and turn it into one film without losing so much of its intent (see: David Lynch’s 1984 adaptation).

Once a decision like that is made, then comes how the film will be framed. That’s the magic of Dune. There’s this grander narrative initiated behind-the-scenes by the Emperor of the Imperium that forces House Harkonnen and House Atreides at each other’s throats. Spectacle and scale extend out from this conflict, giving Dune its massive scope and astounding setpieces. These range from the first time Paul encounters a sandworm to armies fighting in close-combat to flying through a sandstorm. All accompanied by a dizzying score from Hans Zimmer that features so much variety without losing the film’s scope.

These setpieces also lend themselves to a visually gorgeous film that feels like a companion piece to Blade Runner 2049 – Villeneuve’s other ambitious science fiction film. Though this one has less emphasis on lighting and the overall noir aesthetic of Blade Runner, it makes up for it with wide vistas and an equal emphasis on mood and scale. Shot by Greig Fraser, there’s an oppressiveness to a lot of Dune’s composition that mirrors Paul’s own struggle to get out from everyone else’s expectations of him. The production design also helps with that, surrounding each House with brutalist architecture and the planet of Arrakis itself forcing House Atreides indoors to the dimly lit rooms shielded from the sun.

Down a layer from the spectacle is the relationship between Paul and his parents and their separate plans for him. That’s where the film finds its heartbeat. It is not until Paul steps foot on the sands of Arrakis that he appears to have autonomy over himself. A lot of Dune is shot close to the character’s faces, often because they are alone in a room or feel separated from those around them. The relationship between Leto and Jessica is almost entirely told visually with the two of them rarely speaking to each other and yet appearing to love each other wholly and completely.

Then there are the relationships Paul has with so many other characters. As royalty, he doesn’t really have friends more so than he has strong bonds with allies. Jason Momoa’s first appearance as Duncan Idaho immediately establishes the close relationship that he and Paul have, even though he is also Paul’s combat instructor. Every character that Paul interacts with immediately feels like there’s a lifetime of camaraderie, even if he might be kept at an arm’s length from the more serious discussions surrounding his life.

Dune also works really well because not only does every character feel lived in and end up feeling significant: they’re also played by extremely charismatic actors who do so much in the role. The supporting cast overall is stacked with actors all providing great performances. From Stephen McKinley Henderson to Josh Brolin to David Dastmalchian and Dave Bautista to Javier Bardem and Sharon Duncan-Brewster, there are so many fantastic performances that all lend themselves completely to Villeneuve’s vision.

That’s just the supporting cast, all of whom give it their all as if they’ll never get to do a movie like this again. Not only does the casting in the film feel true to Herbert’s novel, it elevates the significance of everything within it. Nothing is just a role that needs to be filled. It’s a character that needs to be lived in. This is to say nothing of the two most important roles in the film, Paul and Jessica. Chalamet isn’t quite revelatory as Paul but he fits the role snugly and does a fantastic job carrying a film that relies heavily on introspection and carrying the burden others have placed on him.

It’s really when Dune begins exploring Lady Jessica and starts prying at her character where the MVP of the film’s cast stands tall. Rebecca Ferguson is a powerhouse in this, turning Jessica into a fierce, independent woman, capable of operating with just as much precision in the shadows as in the light. She can juggle the most emotional sequences with ones that demand her to be brutal and royal at the same time. It’s arguably her best performance in a career that has already seen many great roles significantly elevated by her presence.

The key to Dune is that it depends on its humanity, so while the science fiction and fantasy elements are there and done well, it’s making sure the characters never feel like “we need an evil henchman” that gives Dune its power. The stakes are just as real for one person as they are the other. Loss is loss, no matter who is involved. It’s easy to follow along with each character’s plight because they’re relatable in some way. This is evident in the recurring idea in House Atreides of the desire to do good when the world seems to be working against you and the attempt to be yourself when external forces pressure you into fulfilling a role.

Unfortunately the downside to everything with Dune is that it doesn’t end in a way that will satisfy most narratively. It’s part one of an intended two-part series. Where it leaves things hangs a lot of loose threads that will be entertaining to pick back up with a character who makes a meaningful choice at the end that will define his entire being. As a whole movie, it’s impossible for it to feel complete, but there are not much better ways to end a first part than where it does.

At the end of the day, Dune is a triumph. It builds a world and strings together so many narrative threads and characters that it’s mind boggling how well it works. There’s an entire universe to explore, but Villeneuve manages to let it wash over you and fully immerse the audience in its political and religious underpinnings. It’s hard to call it his best movie when it dangles so many unfinished stories in the air, but it is certainly his greatest achievement in almost every respect. Part Two cannot come soon enough.

Compartment No. 6 Rides High on its Chemistry

Evil Dead Will Satisfy Your Bloodlust