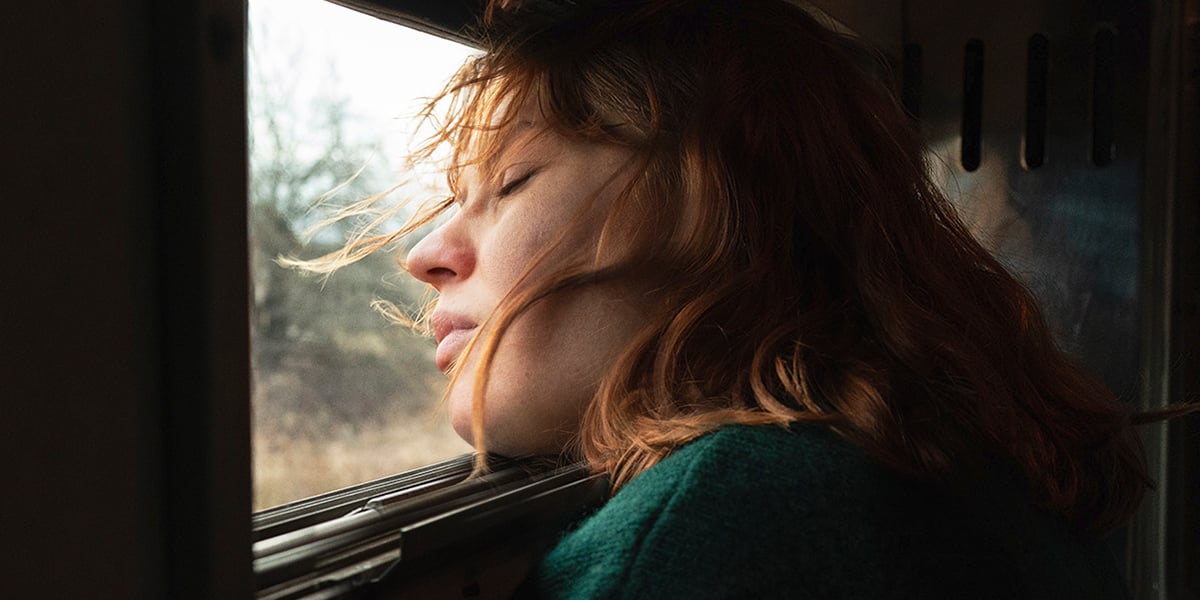 Set primarily in the confines of a train, Compartment No. 6 is an immediately claustrophobic film. A sparse film narratively, Juho Kuosmanen’s sophomore feature effort dives into two characters slightly damaged in their own ways and deftly navigates first impressions and complicated feelings. Utilizing its minimalist setting and characters, Compartment No. 6 explores the early stages of a relationship, anchored by its two nuanced leading performances.

Laura (Seidi Haarla) is forced to share a small two-person cabin on a railcar with a seemingly belligerent alcoholic, Ljoha (Yuriy Borisov), all so she can see some rock carvings (otherwise known as petroglyphs) in a remote area of northern Russia. The two could not be more at odds when they begin their journey. Already homesick and questioning the stability of her current relationship, Laura slowly begins to open up to Ljoha and the two form a rapport that helps pass the time on their trip.

Where Compartment No. 6 truly shines is in its characters and the actors that inhabit them. While Laura is given the most screen time and who we primarily follow, Ljoha might be the most interesting character especially when trying to root out the cause of his volatile personality. Frequently he moves from happy to depressed to angry, but he also wants to be let into Laura’s life. What becomes painfully clear is that it’s easier said than done when both people have their own separate histories that prevent them from truly seeing one another for who they are.

It’s in those brief moments where they forget their surroundings that Compartment No. 6 is at its strongest. It doesn’t matter where they are, the conversation and palpable chemistry between the two draws the audience in and makes their relationship endearing. They’re tiny pockets of genuine attraction between two people with their guard up, aided by Haarla and Borisov’s respective performances.

Borisov in particular hides a pain in plain sight with his portrayal and is given a mysterious, enigmatic background besides the tiny nuggets of information he provides. Meanwhile, Haarla is working with a character that isn’t afraid to be herself. It’s a more emotionally charged performance that helps let the audience in when Borisov’s performance intentionally tries to keep everyone out. The two characters are not alike, but thanks to Haarla and Borisov, their moments together make them seem destined to ride the train forever.

By the end Compartment No. 6 loses a bit of steam but manages to end on a pitch-perfect note that accentuates both its protagonists’ personalities. It occasionally loses a bit of focus on the companionship between Laura and Ljoha and every moment not thinking about the two of them brings the film to a halt. It’s a bittersweet experience watching them together and while fans of films like Richard Linklater’s Before trilogy will probably gravitate towards Compartment No. 6’s central relationship, there’s a lot heavier baggage being thrust upon the audience and hidden from the main characters. It amounts to great layered performances but a severity that Kuosmanen’s film doesn’t seem fully equipped to handle.

The 2021 edition of Festival du Nouveau Cinema runs from Oct. 6 to Oct. 31. Visit the official website for more information.

JFF 2021: Beyond the Infinite Two Minutes and The Fable: The Killer Who Doesn’t Kill

Dune is a Triumph of Science Fiction Filmmaking