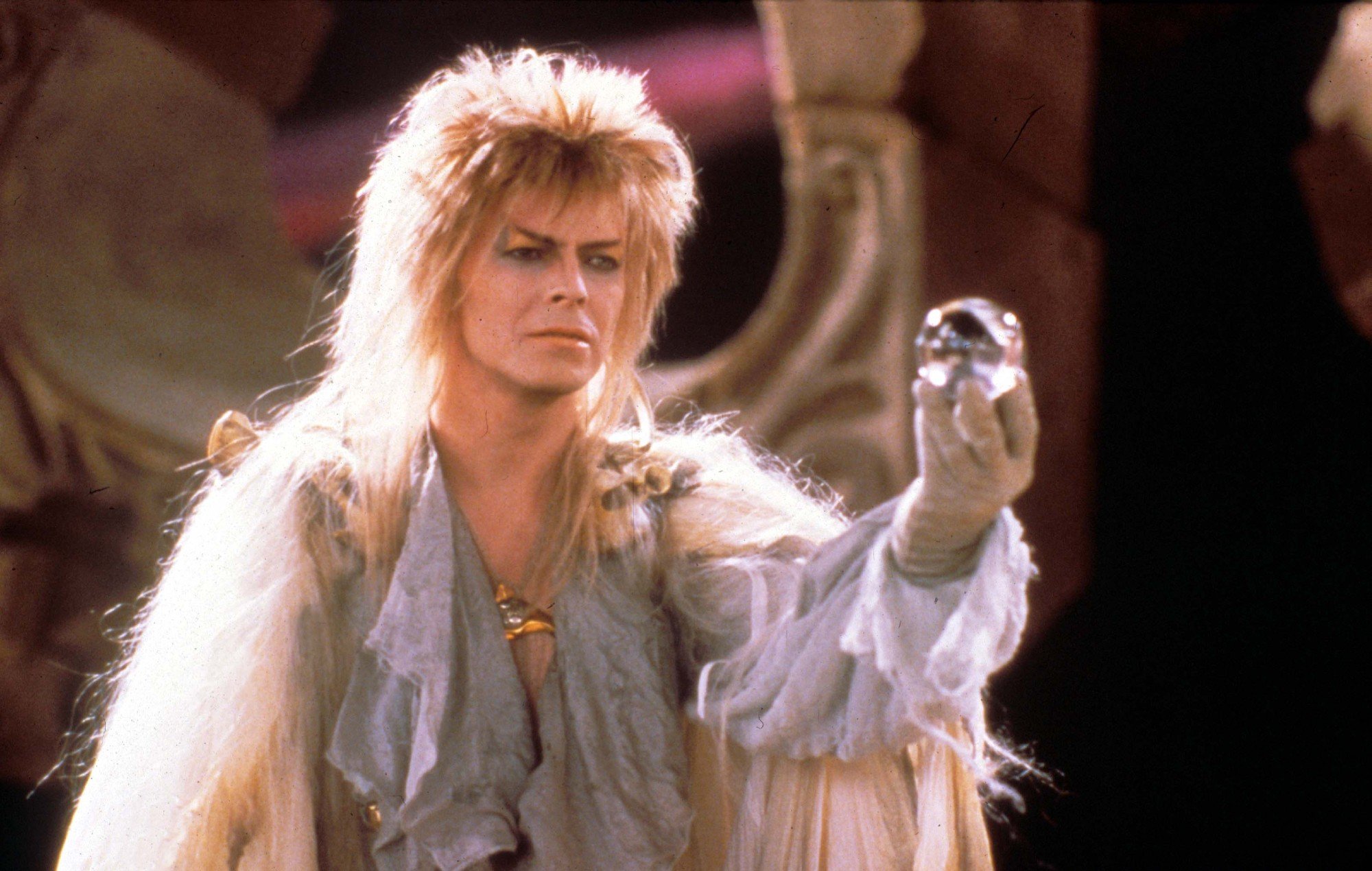 David Bowie and the Movies…

David Bowie has never played an actual deity on film, although as Pontius Pilate in The Last Temptation of Christ (1988), he does get to hang out with Jesus for approximately three minutes. This fact seems almost surprising, considering how his musical personas often have the tinge of a messiah, from the alien Ziggy Stardust, the schizophrenic Aladdin Sane to the “Aryan superman,” The Thin White Duke. David Bowie on celluloid is nevertheless godlike, even when the word itself is never spoken out loud. Strangers from strange lands, Thomas Jerome Newton in The Man who Fell to Earth (1976), Jack Celliers in Merry Christmas, Mr. Lawrence (1983) and Jareth in Labyrinth (1986) all have a divine quality that inspires almost cultish behaviors from those around them.

David Bowie’s characters in the three films are introduced in ways that accentuate their status as the Other. In Man, Thomas is an alien from another planet. Already the first image of his small frame scaling the vast, foreign landscape sets up the alien versus earth dichotomy. In the same fashion, in Merry Christmas, the audience meets Jack, a British soldier caught in a Japanese concentration camp, when he is brought into the dangerous territory of a courthouse. Jack is surrounded by Japanese soldiers and his bleached blond hair, ridiculously untouched by his harsh living conditions, effectively connotes him as the exotic other. While the Japanese characters are frequently photographed in groups, whenever the camera cuts to Jack, he occupies the frame by himself against a blank background. This composition remains constant as the film progresses. Jack is distanced from both sides of the war; he is in a land of his own.

If Jack and Thomas wander into strange lands, Jareth in Labyrinth knowingly brings the weird into a normal household. A classic entrance, Jareth is introduced through his shadow, which creeps onto the floor of the chastely white bedroom belonging to Sarah (Jennifer Connelly), the young girl who wishes for the Goblin King to steal her baby brother. Jareth comes in like a hurricane, quite literally, and with him come bouts of glittery winds. Everything about him is supernatural, from his larger-than-life clothes to his power to transform objects. He arrives from another place, not above, but below.

Not only do the three characters exist on a different realm, they also have unlikely religious effects on others. Thomas, the alien, fills his life with strange rituals, such as barricading himself with numerous TV screens or reenacting movie sequences. His lover, Mary-Lou (Candy Clark), obeys his peculiar behaviors like a good shepherd. On the one hand, her tolerance is out of her romantic love for him. On the other hand, her actions have a trance-like undertone, especially in the sequence where they engage in what could be aptly called terrifying alien sex. Their copulation is intercut with images of the earth and the stars, connoting a cosmic significance of their relationship that transcends beyond human boundaries.

Jack in Merry Christmas elicits the same cultish response from other characters, especially from the Japanese Captain of the camp, Yonoi, played by Ryuichi Sakamoto, another rockstar in real life. Their first encounters establish Jack as the martyr; the British soldier takes off his shirt to show multiple scars on his back, the result of many beatings. From this moment on, whenever the two soldiers are in the same scene, their exchanging glances are visually demonstrated only through close-ups, intensifying Yonoi’s fascination for Jack. The depth of Yonoi’s feelings contrasts sharply with the little information about Jack that he knows, once again confirming the hypnotic power the martyr possesses that could compromise an intensely stoic captain.

In Labyrinth, Jareth’s power of seduction is most evident during the ballroom sequence where he lures Sarah into dancing with him. The scene is overstuffed with luxury as people strut around in sparkling velvet. The elusive Jareth alternately appears and disappears, consequently drawing Sarah closer into her search for him. The sequence is filmed through a distorted filter, making every character appear unreal and dream-like, even to the point of grotesqueness. Jareth is a part of the scene and yet, his singing simultaneously leads Sarah on, demonstrating the Goblin King’s omnipotent vocal power; he’s the all-seeing, all-powerful god of the underworld.

Bowie’s godlike characters use their status of the Other to direct the audience’s attention to alternative forms of popular structures while criticizing social norms. While Thomas and Mary-Lou are driving through a barren landscape, the scene is punctuated with the alien’s reminiscence of his own planet, where the scenery is populated with the color of green trees. In another instance when Mary-Lou brings Thomas to her church, the alien is out of place, much in the same way Jack shows his discomfort during both Christian and Japanese religious ceremonies in Merry Christmas. The hypocrisy of religion and Mary-Lou’s naivety in her belief is exposed when, towards the end, Thomas becomes a Jesus figure himself, torn apart and crucified by greedy corporate mongers.

Similar to Thomas, Jack in Merry Christmas comes from a long line of martyrs. In his adolescent years, Jack’s younger brother is constantly teased at school for his singing and effeminate manners. After a particular aggressive brawl where Jack stands by without defending his brother, the young boy never sings another note again, a fact that haunts the older man for the rest of his life. Jack’s decision to kiss Captain Yonoi’s on the cheeks effectively overturns social and cultural conventions. The camera tracks on Jack’s figure as he walks toward Yonoi, the first time the British soldier’s movements are filmed in a continuous take, suggesting his decision to finally make amends with the past and stand beside the emotionally isolated and closeted Japanese captain. In the end, Jack becomes a literal martyr. Jack dies from his punishment of being buried from the neck down and yet before Captain Yonoi leaves the camp, he takes a bit of Jack’s hair and after the war, sends the lock to a shrine in Japan. This act not only immortalizes Jack’s existence but also officially inducts him into the reigns of religious beings.

With the Goblin King, his position is for a more detrimental cause. Jareth stands in for all the vices of adulthood that tempt the young and innocent Sarah. The ballroom sequence is once again a perfect demonstration of Jareth’s symbolism as a character. Sarah’s white dress contrasts sharply with the rest of the costumes. She is also the only person who does not wear a mask while others hide under their deceitful makeups. As the ruler of the goblins, Jareth is a deity that advocates for complete decadence of the soul. At the end of the film, he even wears the same white clothing as Sarah does in his final attempt to lure her into staying. His scheme fails, however, for Sarah is finally awakened to her own power, despite her young age. “You have no power over me,” Sarah utters and Jareth’s hedonistic religion crumbles into dust.

The godlike psyche of Bowie’s characters blends beautifully with the nature of cinema. To watch a film requires certain obedience; regardless of whether viewers see the movie on their laptops or in theaters, the unspoken rule remains that thou does not leave until the end credits roll. Bowie’s acting command that goes into creating these hypnotic individuals is greatly satisfying since together they contribute to the singer’s artistic universe, a world that refuses to exist merely on planet Earth.

Editor’s Note: This article was originally published on June 15, 2015, under our old brand, Sound On Sight.