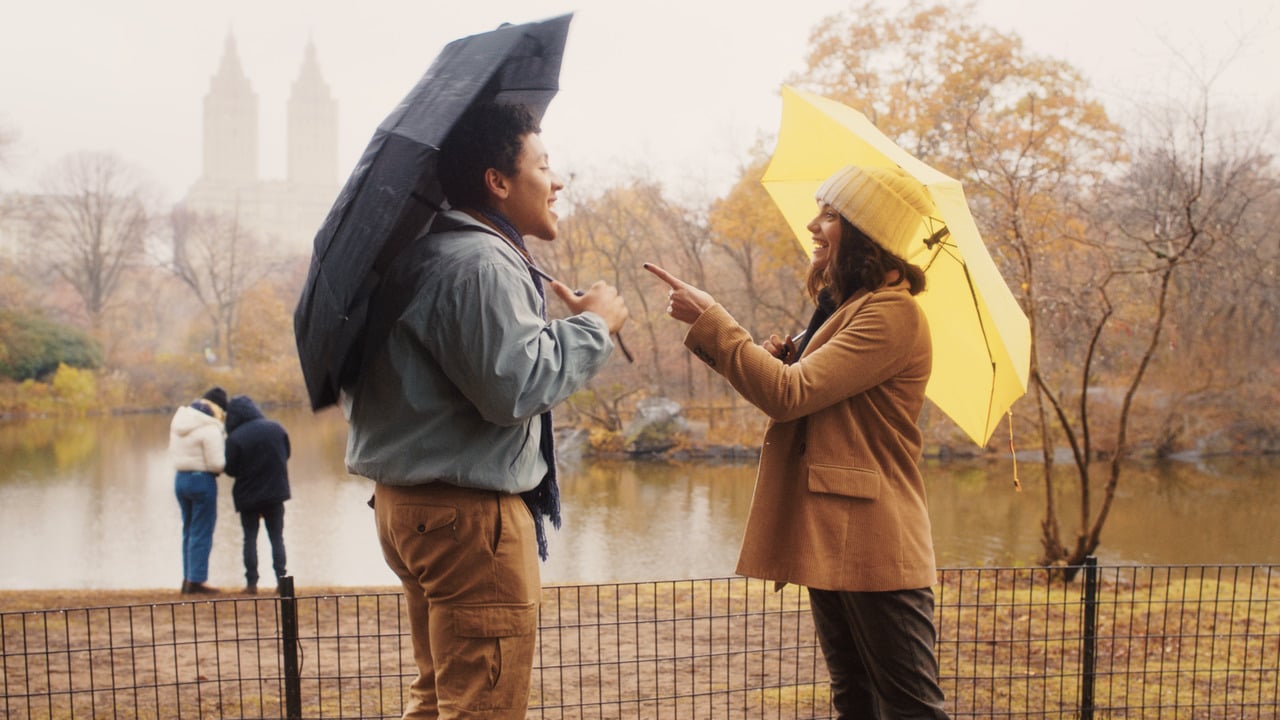 Dating and New York is a film that I clicked on in the Tribeca Film Festival’s virtual library, knowing almost nothing about it. And it ended up being one of my absolute favorite movies of the festival.

The film, directed by Jonah Feingold, is simultaneously a parody of the New York-set romantic comedy tradition, a homage, and an off-kilter remix. When Harry Met Sally…, of course, is the most obvious inspiration, but there’s a hint of Sex and the City, as well as Annie Hall and other works of Woody Allen.

It’s what I used to call a “dating theory” movie, in which the characters are forever talking about the rules and mechanics of dating, except it’s updated for the age of dating apps and FaceTime.

In addition to all the parody, Feingold shows that he really, truly knows the film grammar of this type of movie. I have no idea what the budget was for Dating and New York, but it’s shot, edited, paced, and otherwise presented not unlike the movies to which it’s paying homage.

Dating and New York also goes to all the locations you’d think it would go to, including lots of time in Central Park, Upper West Side sidewalks, and spacious Manhattan apartments that these characters could never realistically dream of affording. The cinematographer, Maria Rusche, also shot another outstanding recent New York movie, Shiva Baby.

It’s all very funny, very cute, and very creative. Does the film have anything particularly new to say about the genre, or even about modern-day dating? Not really. But it certainly plays loving homage, while also standing on its own.

Jaboukie Young-White and Francesca Reale play Milo and Wendy, young Manhattanites who meet and soon enter into a relationship that’s been negotiated with lawyerly precision: They will be “friends with benefits,” but not an exclusive couple. But feelings, predictably, get in the way.

This, of course, was also the premise of a pair of Hollywood romcoms about a decade ago- the Justin Timberlake/Mila Kunis Friends With Benefits and the Ashton Kutcher/Natalie Portman No Strings Attached, two movies with so much in common that the stars of both movies (Kutcher and Kunis) later married each other. Of course, stealing that premise just adds to the layers of homage and parody.

Meanwhile, shades of Bruno Kirby and Carrie Fisher in When Harry Met Sally, the secondary couple (Brian Muller and Catherine Cohen) gets together and advances their relationship while the main couple is still figuring things out.

The film works so well that, beneath all of the layers of parody, homage, and irony, I was sincerely invested by the end in the country actually getting together. That’s a hard needle to thread, but Feingold managed it. And yes, this movie is twee as hell- but when things are described as twee, I almost always love them.

The other big strength is the cast, which consists almost entirely of people whose names you would only know if you’re Extremely Online.

Young-White is a comedian, TV writer, and Daily Show correspondent who’s famous for repeatedly getting kicked off Twitter for hilarious reasons; I’m not sure I even knew he was an actor until now. Reale was on Stranger Things, and while this is her second movie, the first was last year’s amusing comedy Yes God Yes.

Catherine Cohen is an acclaimed comedian and cabaret singer and steals all of her scenes here, and I really hope this is the start of a long movie career for her. And the director, Feingold, was previously best known for making the viral Internet video Wes Anderson Presents Star Wars, which riffed entirely off of the first trailer for The Force Awakens, a year before the movie even came out.

Dating and New York was acquired by IFC out of Tribeca. For all I know, it will end up being one of those Tribeca movies that get a perfunctory VOD release over a year later and make no impact whatsoever. But what it deserves is to become a sleeper hit and everyone involved to become a star.

LFG Looks at the Two Big Battles of the U.S. Women’s Soccer Team