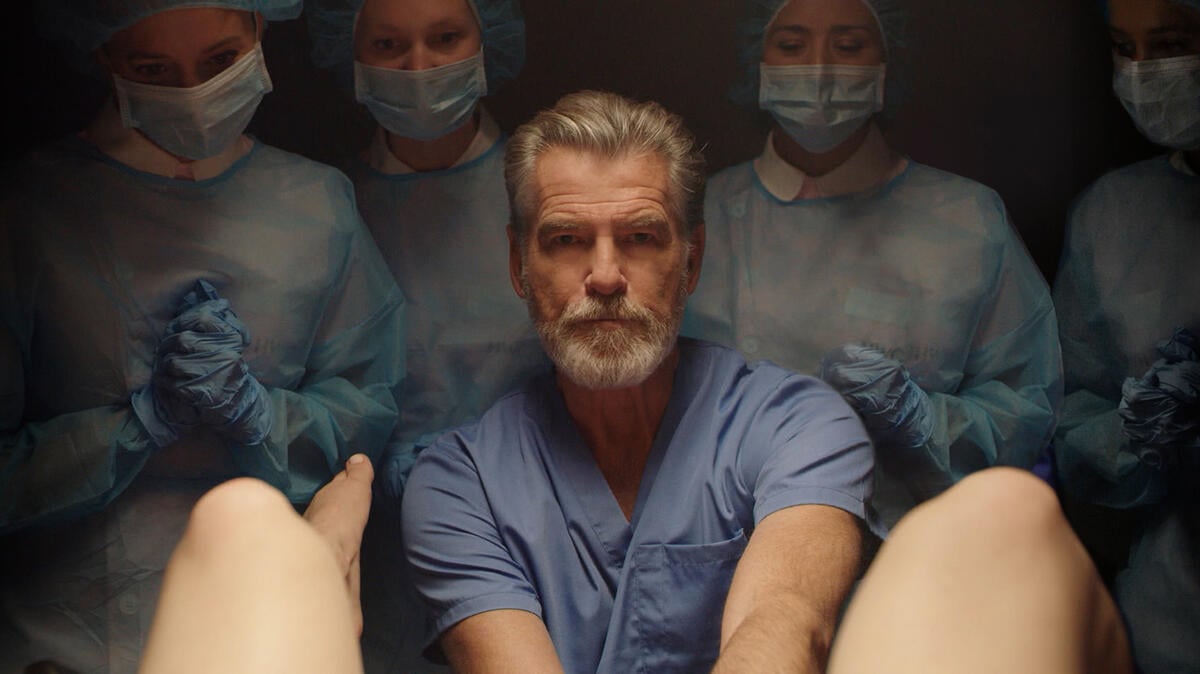 The new film False Positive is trying to do something very specific, and on that, it mostly succeeds. It’s a semi-remake of the very specifically 1960s movie Rosemary’s Baby, updated with a very 2020s glaze, when it comes to both modern-day technology, as well as feminism, gaslighting, and the expectations of mothers.

False Positive, an A24 production that debuted this week at Tribeca and will launch on Hulu June 25, is directed by John Lee, best known as the co-creator of the demented MTV puppet show Wonder Showzen and various Adult Swim shows; Lee co-wrote the screenplay with the film’s star, Ilana Glazer.

Glazer is best known for co-creating and starring on Broad City, but False Positive is pretty far away tone-wise from both that show and Wonder Showzen. Rather than a dark comedy, it’s a full-on psychological horror film- and a pretty good one.

Glazer stars as Lucy, a woman struggling with fertility, until her doctor husband (Justin Theroux) introduces her to a renowned fertility doctor (Pierce Brosnan), who had been his mentor. With the help of this gynecological office, which right off the bat has many of the trappings of a cult, the couple is soon expecting.

The doctor, of course, turns out to be not exactly what he seems- and as you could probably guess if you know Rosemary’s Baby, neither does the husband. I won’t spoil exactly how it goes sideways, but it absolutely does, although the film mostly takes its time revealing exactly what is going on. It mostly sticks the landing, but the ending is going to be very controversial.

You’ve been a mother going through fertility difficulty, or even if you’ve spent much time reading feminist blogs over the course of the last decade, you’ll likely be familiar with numerous themes raised by False Positive. These include the problem of arrogant male doctors questioning women’s decisions, difficulties with work/life balance, being told to smile when you don’t want to, and (most of all) gaslighting.

The characters in the movie continually, and condescendingly refer to any time Lucy questions the tenets of the overarching conspiracy as “mommy brain.”

Lee’s direction is superb, and the sets, whether the couple’s home, the antiseptic doctor’s office, or the ad agency where Lucy works, all look just right.

The one place where the film really steps wrongly is in its treatment of a midwife (Zainab Jah), who’s introduced later in the film. Not only does the film appear to be endorsing some questionable woo-woo stuff, and the idea of siding with a YouTube you saw over what your doctor says, but her character arc leads up to a moment so loaded that the film should have spent more time unpacking it.

The acting is strong across the board. Glazer, a performer most known for comedy, makes a successful turn into dramatic acting; her hair being straight is almost as jarring as the tone of her performance. Theroux, in a part that recalls his turn five years in The Girl on the Train, is much better here than he is in the boring Mosquito Coast show, while Brosnan is chilling as the villain when he could have played the part by going over the top.

Gretchen Mol, the ’90s It Girl who later resurfaced on Boardwalk Empire, has a fun role as a creepy nurse. Another actress from around that same time, Sophia Bush, plays the equally chilly part of a “mommy friend” who may not be all that she seems.

Once False Positive hits Hulu, there will be arguments and think pieces. I’m sure Dr. Jen Gunter will weigh in, and I expect Ross Douthat to sound off on the plot’s abortion implications. But beyond political considerations, it’s a taut, creepy thriller that makes most of the right choices.