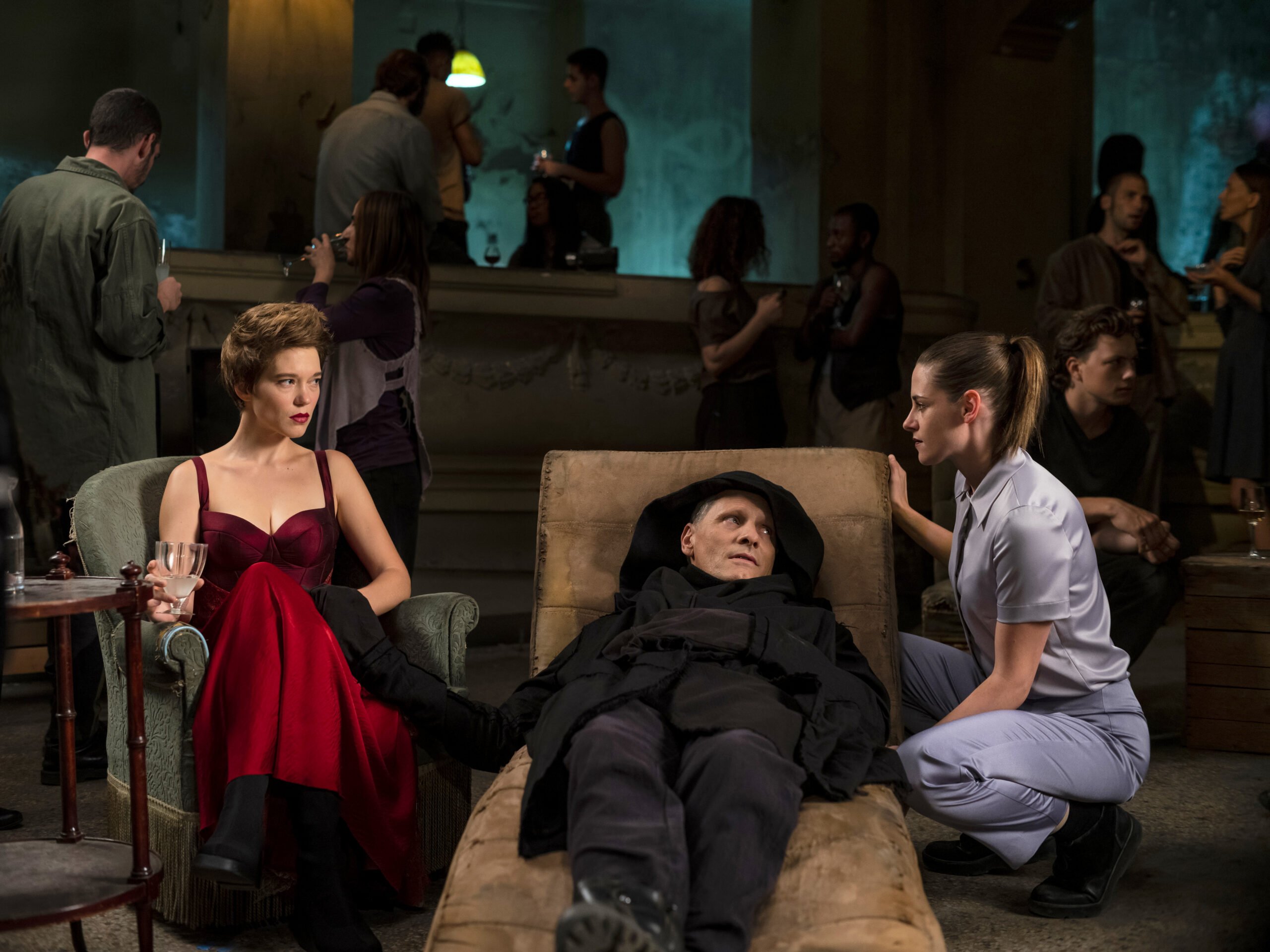 Crimes of the Future Review

Cronenberg’s first film in eight years marks a return to many things. He brings us into another grotesque reverie filled with delightful abominations that prod at our ideas of humanity. This time, it’s a sci-fi/noir exploration of how our bodies adapt to the polluted world we’ve created. I squirmed with glee into my AMC recliner at the dark and fascinating future he constructs but I left wanting more.

Saul Tenser (Viggo Mortensen) is a performance artist whose canvas is his own body. To the awe and amusement of audiences, he and his partner Caprice (Léa Seydoux) use a modified robotic autopsy pod to surgically tattoo and remove new organs that Saul cultivates inside of himself. As Caprice etches her designs into the fleshy sacks still connected to the conscious Saul, he winces with pleasure. Saul is one of many whose bodies are adapting to the toxic future. Wary of the changes taking place, the government creates a secret bureau called the National Organ Registry to catalog and track the novel growths that bloom inside the bodies of those experiencing Accelerated Evolution Syndrome. The New Vice Unit of Justice, a law enforcement agency, has taken a less neutral approach to the emerging anomalies and is guided by an anti-evolutionary philosophy, prosecuting those who not only embrace their synthetic adaptations but see them as humanity’s future.

Mortensen marks another collaboration with the director after A History of Violence and Eastern Promises, both released in the mid-aughts. He brings his signature ‘hunted yet vulnerable’ quality to Saul, who opines on the qualities of his performance art milieu and challenges his own work. Saul’s art is his own exploration and understanding of his body and what it is that makes him human. Like Cronenberg’s films, Saul’s work is sensual and provocative; it’s in awe of the beauty of what many think of as disgusting. Like Videodrome and Crash before it, Crimes of the Future investigates the Lacanian concept of jouissance, the point where pleasure can be derived from pain, in a time when feeling is moderated and attenuated. Cronenberg can’t seem to shake the paradoxical connection between pleasure and pain. While convalescing after a performance, Timlin (Kristen Stewart), one of the bureaucrats at the National Organ Registry, cozies up to Saul and asks “surgery is the new sex, isn’t it?”

Cronenberg brings on two of film’s most interesting and sought-after performers in Seydoux and Stewart. Both actors balance their beauty with an inscrutable steeliness that is tailor-made for the dungeon-like atmosphere of the film. Fellow Canuck Scott Speedman is engrossing as the pulsating nerve of the story. All of the principal cast inhabit the technological dystopia so naturally, you’d think they were grown in the dark and dank catacombs they populate. This includes their interactions with the gnarled and ghastly contraptions Cronenberg and his long-time production designer Carol Spier have created.

So much of the wonder of this movie, as with the director’s earlier films, is the tactile and physical nature of the world. Like the Alien series did with H.R. Giger’s work, Cronenberg eschews CGI for real, gross objects that make your skin crawl simply by knowing they exist. Saul sleeps in an ‘OrchidBed’, a large oblong sphere that looks like a cross between a walnut shell and a testicle with flipper-like tendrils that attach to his hands and feet. The bed senses discomfort in the occupant and adjusts to ensure the occupant’s tranquility. Saul has a difficult time eating and, as such, uses a ‘Breakfaster’ chair which looks as if it’s made entirely of jawbones that kind of jiggles a person struggling to eat and digest their meal. As mentioned, there is the Sark autopsy machine that’s been modified for Saul and Caprice’s performances. It’s controlled by a remote control that looks like a frog’s carcass filled with Infinity Stones. My attempts to describe these macabre creations do little justice to what is a magnificent highlight of the film.

It’s here where Crimes of the Future literally falls short. I want more! Historically, Cronenberg’s films hover around the 90-minute mark and bless him for that. With this one clocking in at a featherweight 107 minutes, he delivers intrigue as well as a mystery plot with an austere economy. Cronenberg’s movies dive into the fleshy wrinkles of humanity to examine our relationship with our own bodies that often involve recondite subcultures or arcane organizations. There is always a lot happening and he wraps it all up before the ice in your glass can melt. Here, he engulfs us in a gloriously dark future complete with technology, ideological factions and a pretty compelling mystery propelling it all along. While the plot gets wrapped up, there is certainly more time that could be spent detailing the crevices of the world he’s pulled back or in other dark corners we didn’t get a chance to see. Give me a lung blender, ribcage toaster oven or any other fucked up appliances they painstakingly built.

It was in Videodrome that Cronenberg referred to tumors as the new organ and heralded the next phase in the evolution of man as a technological animal. In Crash, he explored sex and the next stage of human evolution aided by the increasingly synthetic and man-made world around us. In 2013, he even did the narration for a documentary about the organ trade. The script itself is an artifact from his past, written over 20 years ago and the title is cribbed from one of his early short films. Cronenberg has never ‘lost it’, per se, but his filmmaking interests have shifted. Crimes of the Future is a storytelling sweet spot for him that he absolutely crushes. While I would love for more of this from him, I also am so happy to just continue enjoying him doing whatever it is he wants to do.

40 Years Ago: Star Trek II: The Wrath of Khan May Have Saved the Franchise