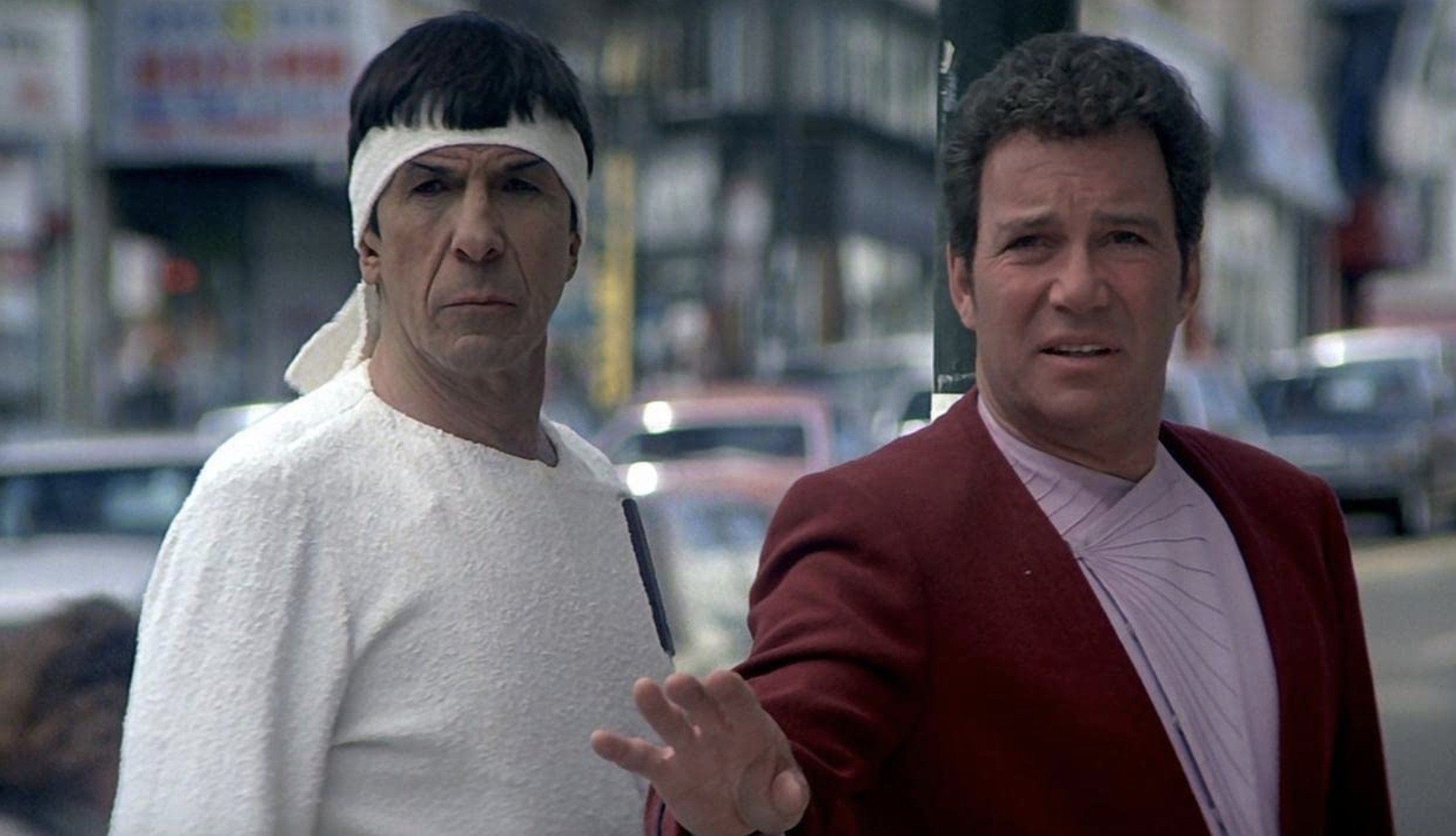 Following the second and third Star Trek movies with the original cast, which dealt with the death and resurrection of Mr. Spock, the fourth film offered quite a bit more levity- or at least, as much as is possible for a movie that features the possible end of life on Earth.

The film was directed by Leonard Nimoy himself in his second consecutive turn in the director’s chair, while the film had four writers, Steve Meerson, Peter Trikes, Nicholas Meyer, and Harve Bennett, the latter two veteran Trek hands.

The plot first deals with the fallout of Star Trek III: The Search for Spock, with the Enterprise crew in exile on Vulcan while waiting to face punishment for their actions in the previous film.

Spock himself is still recovering from his death and resurrection; in a time when death in movies has become essentially meaningless — especially in Star Trek: Into Darkness, which re-enacted the ending of The Wrath of Khan but kept Captain Kirk dead for about three minutes, rather than an entire additional movie — it was good that these films actually did the work to acknowledge that Spock’s death, however temporary, actually affected him. And with the Enterprise having been destroyed, a captured Klingon Bird of Prey from the third film is the crew’s ship for the run of The Voyage Home.

It’s a movie where the plot is somewhat convoluted, roping in time travel and whale signals, without really having a major villain. But it’s a tremendous amount of fun, perhaps the most of any Trek film.

As The Voyage Home begins,  a mysterious probe has threatened life on Earth. But the newly resurrected Spock notices that the probe emits a signal that sounds like that of humpback whales. But because that species is extinct in the future, the crew must go back in time to 1984 San Francisco, grab a whale, and bring it back to the 23rd century.

Before this multi-phased plan can be brought to fruition, the film makes room for a great deal of fish-out-of-water comedy, such as Spock executing a Vulcan nerve pinch on a loud bus passenger, and Spock jumping into the tank to speak to the whales (“maybe he’s singing to that man!“)

The Voyage Home was part of the pattern that held for a long time in which the even-numbered Star Trek movies were much better than the odd-numbered ones. It was followed by the despised, Shatner-directed The Final Frontier, before the sixth film, The Undiscovered Country, the last film with the full original cast, was much more successful.

Star Trek IV: The Voyage Home, like a lot of Trek, is currently streaming multiple places, including Hulu and Paramount+. It’s a film that represents the franchise at its best.

Licorice Pizza Shows the Sweeter Side of Paul Thomas Anderson