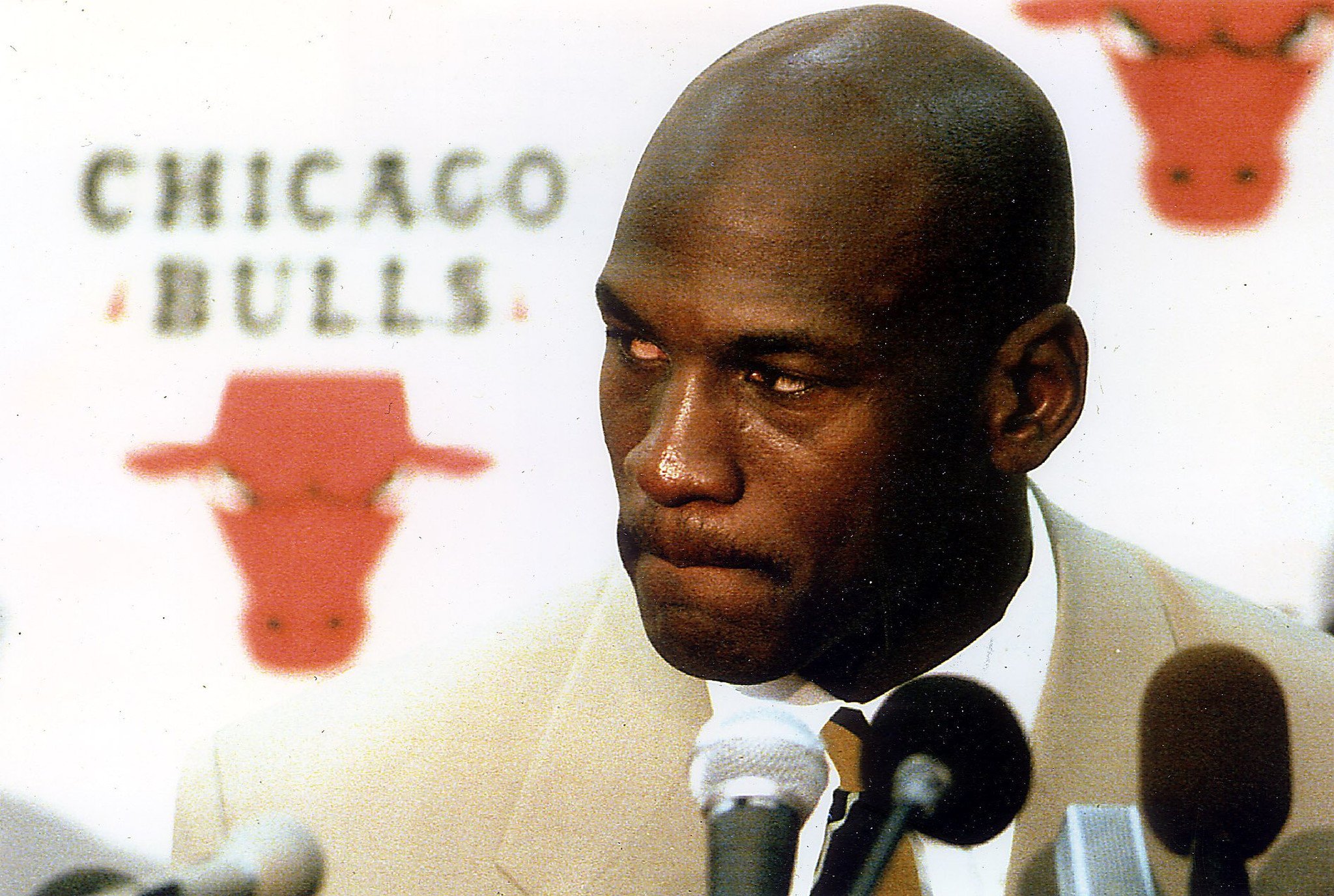 “I don’t have anything else for myself to prove.”

Those were the words with which NBA superstar Michael Jordan of the Chicago Bulls emphatically explained why he was retiring from the game on Wednesday, October 6th, 1993. Jordan confirmed the shocking news at the Bulls’ practice facility at the time, the Berto Center, with what looked to be hundreds of journalists huddled around the press conference table. With his wife Juanita Vanoy and NBA commissioner David Stern to his left and Bulls brass to his right, Michael Jordan was affable, charming, and most importantly confident in his decision.

Few athletes in professional sports can make such a claim when deciding to retire from the game they love. Having “nothing left to prove” is, if nothing else, the epitome of being content with what one has accomplished. In the realm of professional sports, where competition is ferocious and at an all-time high level, the phrase takes on an even grander meaning.  Granted, athletes such as Wayne Gretzky, Roger Federer, Derek Jeter, Joe Montana, and Ronaldo were all iconic and magnificent at what they did. Conversely, in each case, and countless others, there was a sense that their time had come. They were either a little older, or a little slower, or had dealt with one injury too many. Michael Jordan, on the other hand, was at the peak of his powers, which is why his decision stunned the sports world.

Shoot the Lights Out Early and Often

It seems as if from the moment His Airness touched a basketball, greatness was going to happen. His college career featured supreme highs, such as when he led the 1982 North Carolina squad to a national championship, taking the game-winning shot in the process. The opposing club, Georgetown, had Patrick Ewing on its side. Game-winning baskets and foiling the plans of rival superstars would be a recurring theme for almost the next two decades.

The National Basketball Association’s (NBA) Chicago Bulls drafted the North Carolina product in 1984, and smashing success followed Jordan to the Windy City. The interesting thing about the first few seasons of his professional career is that they didn’t pan out the way people recall his latter campaigns. To be more specific, Jordan was amazing. The Bulls, much less so.

The shooting guard was quick to make a name for himself in the NBA. His talent, drive, and willpower to deliver were so impressive that he won NBA Rookie of the Year honours. Not many first-year players roar out of the gate with a 28.2 points per game (ppg) average and a shooting percentage of 51.1%. On the flip side, the team itself was nothing to write home about. They finished the 1984-1985 regular season with a less than enviable 38-44 record and were bounced out of the playoffs in the first round by the Milwaukee Bucks.

A few more years were required to make the Bulls a championship team. Coaches Stan Albeck and Doug Collins each helped the organization make some decent strides, especially the latter, but the “bad boy” Detroit Pistons stood in the way 3 years in a row in the late 80s. That didn’t slow down MJ however. Even when missing almost an entire season due to injury, as he did in ’85-’86, he still left an impact in the playoffs. Against the Celtics that year he scored 49 points in Game 1 and then a remarkable 63 points in Game 2. In the words of Celtics legend Larry Bird, who witnessed the barrage first-hand, number 23 was “God disguised as Michael Jordan.”

The Celtics swept the Bulls, yet Michael’s performance practically overshadowed the series’ result.

Reaching the Pinnacle and Staying There

Things changed in 1990 when Phil Jackson took over coaching duties in Chicago. The club had improved incrementally over the past few seasons, most notably with a batch of terrific new players like Scottie Pippen, forever known as Robin to Jordan’s Batman. Individual awards were nice (he had earned an NBA MVP and a Defensive Player of the Year award by then), but the real hurdle was dispatching the Detroit Pistons and capturing an NBA title.

Jordan and the Bulls throttled every team unfortunate enough to face them during the ’91 post-season. Quick work was made of the Knicks and 76ers before a royal beating was served to the hated Pistons in the Eastern Conference Finals. Lastly, to hammer home the point that Jordan was indisputably the best player in the NBA, he earned his first-ever Finals MVP award. 31.2 PPG and 56% shooting helped lead the way to a 4-1 series victory over the Los Angeles Lakers. They weren’t chumps either. They had Magic Johnson and had co-dominated the 80s along with the Celtics!

No professional athlete will ever argue that doing what they do best is easy, or that winning is a simple feat. Even so, the next two years looked like a cakewalk for Michael and his fellow Bulls. A second consecutive MVP award followed in ’91-’92 (his third overall), as did a mesmerizing 67-15 regular season record. The road through the playoffs was slightly more difficult, especially in the second round versus the New York Knicks, but another championship banner was earned when they handled the Portland Trailblazers in six games. To almost no one’s surprise, Jordan was Finals MVP yet again.

In ’92-‘93 is arguably the crown jewel of the iconic 3-year run. Number 23 was incredible yet again, showcasing a stats line of 32.6 ppg, 6.7 rebounds per game (rpg) and 5.5 assists per game (app). To his ire, Charles Barkley of the Phoenix Suns was named NBA MVP that season. It wasn’t that Barkley didn’t have a terrific year. He did. The problem was that it made Jordan angry and, as if ordained by the cosmos, the two met in the Finals. The Bulls walked away 4-2 series winners, and Michael stomped his way all over Phoenix’s defense with a 41 ppg. Need you ask, yes, he was Finals MVP.

Leave When on Top

This brings the story to October 1993. Actually, that isn’t accurate. Summer 1993 was, succinctly, a tragic one. Michael’s father, James, was killed that July in the most peculiar of circumstances. The elder Jordan was driving in North Carolina and thought it was a good idea to park on the side of the road to get some shut-eye. Unfortunately, a couple of petty thieves tried to rob him. He was shot to death.

It goes without saying that shook Michael to his core. In interviews given since the basketball legend opened up about his close relationship with his father. The two not only loved baseball but James had planted the idea of switching sports in Michael’s mind relatively early in his son’s basketball career.

And so, with “nothing left to prove,” the Chicago Bulls legend hung up his basketball shoes on October 6th, 1993 after 9 seasons in the NBA. It wasn’t long before he joined the Chicago White Sox’s minor league team, the Birmingham Barons.

Watching the press conference, two things feel prescient. First, when asked if he’ll ever return, Jordan does not unequivocally shut the idea down. In his own words, retirement means that he gets to do whatever he pleases which, theoretically, means that he could come back to the NBA someday. Second, there are a few minutes during which the Q&A ceases because someone mistakenly unplugs the microphones. Ironic that the press conference announcing his retirement would be interrupted, much like the retirement itself.

That’s a story for another On This Day in Sports. Oh, but what a sequel.

On this day in 1993, Michael Jordan 🐐 announced his retirement from the NBA after nine seasons and three Championships with the #ChicagoBulls.

Do you remember hearing the news for the first time?#NBA pic.twitter.com/LEaj7gJ0Dt

On This Day in Sports: Eric Lindros, After Hockey’s Weirdest Trade Saga, Made His NHL Debut 30 Years Ago