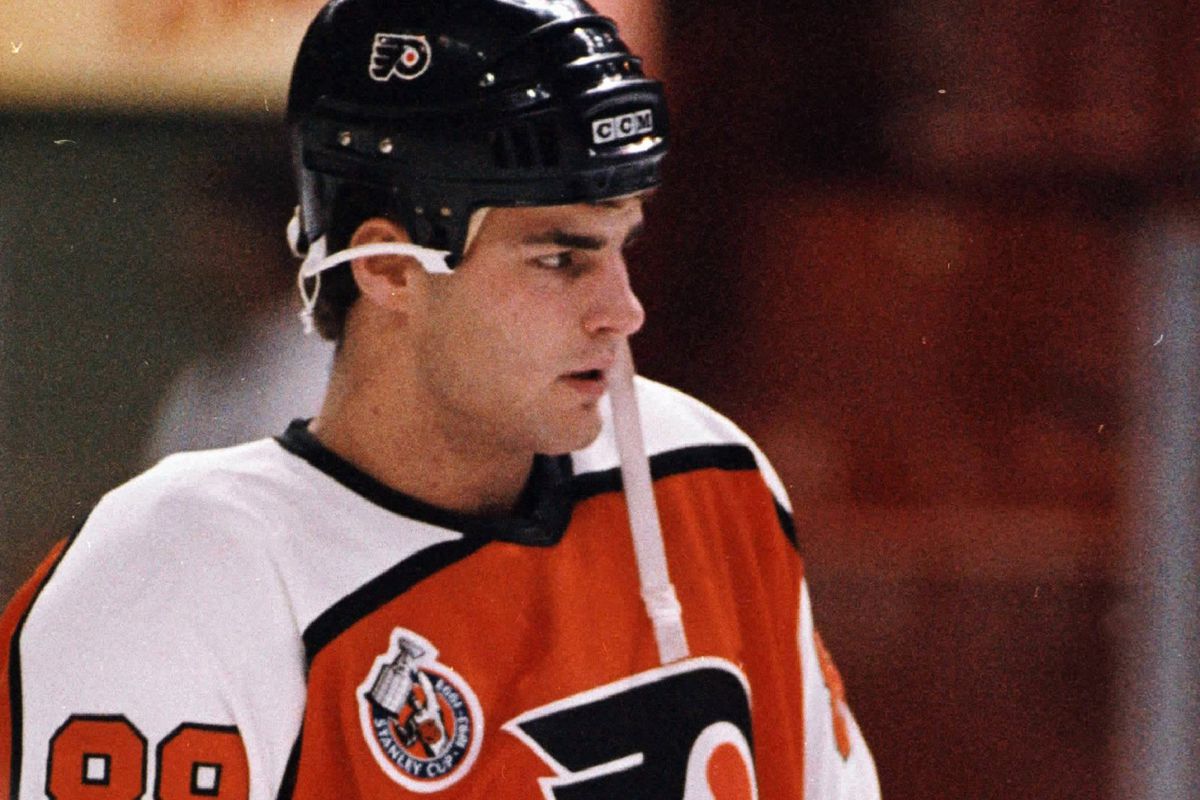 A lot of athletes have been traded twice. Eric Lindros was traded twice by one team in the same off-season.

That was the strange saga that took place in 1991 when Lindros, the biggest hockey prospect to come along in years, was drafted #1 overall by the soon-to-be-defunct Quebec Nordiques. Lindros, however, had stated all along that he would refuse to play for the Nordiques.

Games of chicken like this happen a lot in sports, especially football, and they usually result in the player being traded relatively quickly, or occasionally giving up and agreeing to play for the original team. But in Lindros’ case, he sat out the entirety of his rookie year. It came to a head a year later at the 1992 draft, when Lindros was traded. To two different teams.

The Nordiques, representing the sort of incompetence that appeared to be the reason Lindros didn’t want any part of playing for them — and hinting at why they would disappear into history, or at least Colorado, four years ago — bungled the trade of Lindros by appearing to agree to trades with two different teams. Naturally, the two teams that thought they’d nabbed Lindros, the New York Rangers and Philadelphia Flyers, were themselves bitter rivals.

This kicked off an arbitration process, which a couple of weeks later was won by Philadelphia. The Flyers traded the rights to Peter Forsberg, Mike Ricci, Ron Hextall, Kerry Huffman, and Steve Duschene, plus two draft picks and $15 million.

Lindros made his NHL debut on October 6, 1992, 30 years ago today, scoring a goal in the third period. Lindros would be the Flyers’ best player for eight years, anchoring some very good teams, making the playoffs five times, and reaching the Stanley Cup Finals in 1997.

But while Lindros has his number retired by the Flyers and made the Hockey Hall of Fame in 2016, his later years with the club were plagued by injuries, a feud with executive Bobby Clarke, and a bitter departure from the Flyers in 2001. Lindros never won a Stanley Cup in Philadelphia, and the Flyers’ title drought still dates back to 1975.

The trade decision would end up pivotal to the future of the league for many reasons. The Rangers ended their decades-long Stanley Cup drought in 1994, two years after their non-trade of Lindros. The Nordiques left Quebec for Denver in 1995, and won a Cup of their own their first year as the Colorado Avalanche, with Peter Forsberg a key player.

Those 1992 events have caused amateur historians to have a lot of fun over the years. Would the Flyers have been better off keeping Forsberg and the rest of the haul they sent to Quebec? Would the Rangers, had they given up a haul of their own for Lindros, have still won that Cup two years later? And what if the Nordiques had held firm and kept Lindros- would they have survived in Quebec? Or would they have brought him to Colorado for a dynasty of their own?

Of course, we got some versions of the what-ifs. Lindros ended up with the Rangers, after all, traded to New York in 2021. Forsberg, spent some time with the Flyers at the end of his career, while Hextall also returned to Philadelphia for a run as their general manager a few years back. And Lindros made such an impression at a Flyers Winter Classic alumni game in 2011 that Lindros revealed years later that the Flyers had talked to the then-39-year-old about making a comeback when he was five years out of the league.

On This Day in Sports: Michael Jordan Retired from the NBA