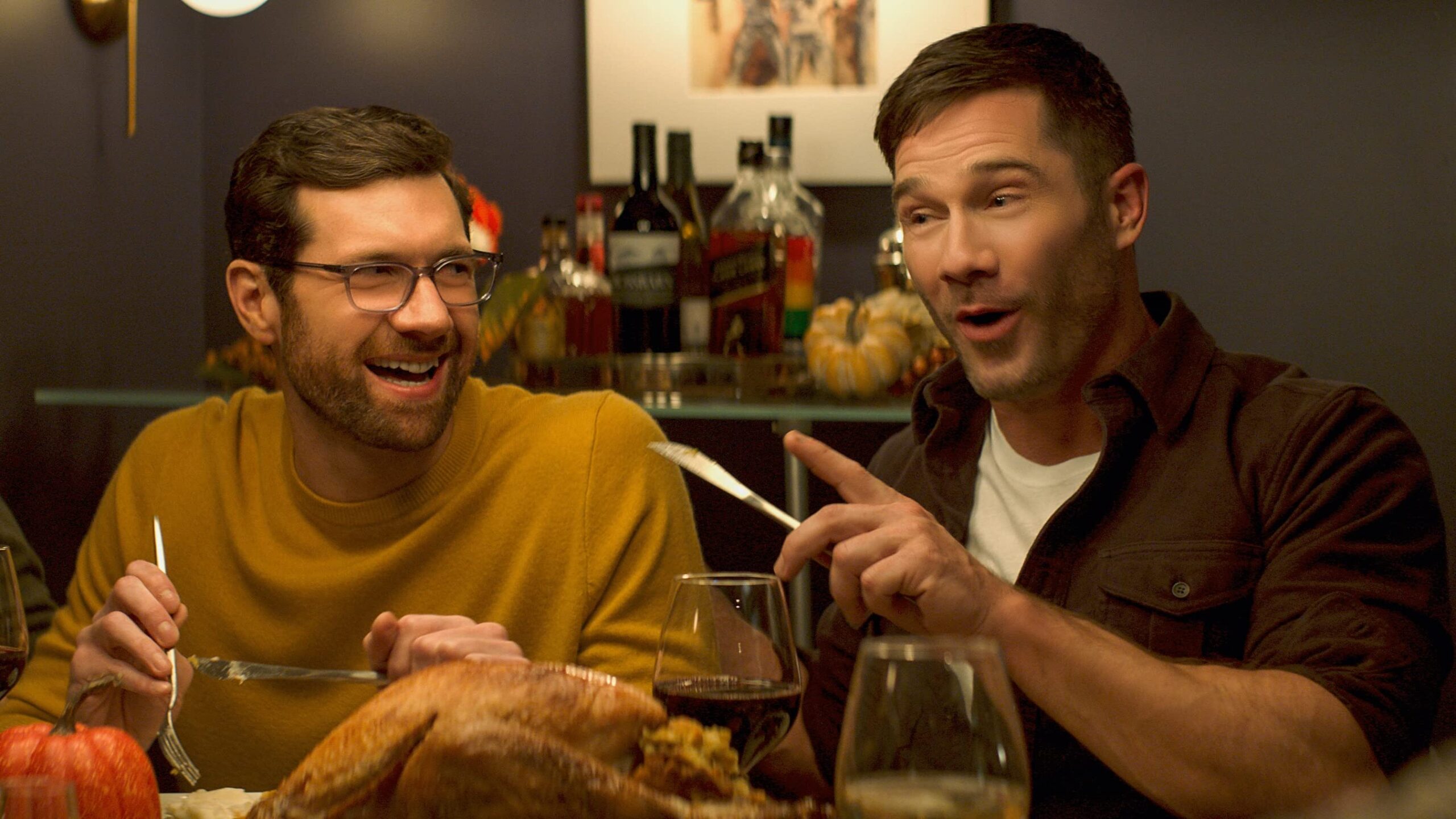 Why is Bros a box office bomb?

Billy Eichner, star, producer, and co-writer of American cinema’s first gay romcom, Bros, is blaming the failure of the movie, despite glowing reviews and a high-flying CinemaScore, on “…straight people, especially in certain parts of the country, just didn’t show up.”  That left Universal on the hook for the $22 million budget and another $30 million in marketing costs on a movie that looks like it’s not going to do much better than its $4 million opening.

Eichner tried to make the case that those non-woke straights were missing out by tweeting about a Los Angeles screening he attended where “The audience howled with laughter start to finish, burst into applause at the end, and some were wiping away tears as they walked out.”

I sympathize, I really do, because I miss movies that do more than offer a showcase for advances in CGI technology, and where the ending isn’t pre-determined by the star’s multi-sequel contract.  And having had a hand in creative projects that didn’t get any further than complimentary rejections, I understand the frustration as well.

But really, fellas, where have you been?

Theater-going still hasn’t recovered from the pandemic shutdown, and as a consequence, even more than before, theatrical box office is being driven by an ever narrower range of films.  According to Box Office Mojo, there are only two non-action-driven or animated films in the year’s Top 20:  Elvis, at #9 which benefits from being tied to one of the 20th Century’s great cultural icons as well as the presence of Tom Hanks, and sequel Sing 2 at #20.  You don’t get to anything resembling any kind of romance (or even much of a comedy) until #38 – Marry Me – with a domestic gross of just $22.4 million, then there’s a drop to #48 and the domestic comedy Easter Sunday at $13 million, and another romance at #49, Licorice Pizza which even with the considerable talents of Paul Thomas Anderson behind it and a Rotten Tomatoes critics’ score to rival Bros, could only pull in $11.9 million domestic.

Fellas, it’s this painfully simple:  after two years of sitting home streaming, it’s hard to get anybody’s ass off the couch and into a theater for anything that isn’t either spectacular or (going by the five animated flicks in the Top 20) something to occupy the kids.  A box office of four million bucks?  That means even the woke types stayed home.  The whole world isn’t Los Angeles.

As a matter of fact, after having done some statistical research, according to Gallup approximately 24 million Americans identify as being members of the LGBTQ+ community.  Cinebox puts the average movie ticket price today at a hair over $12.  Divide $4 million by $12 and you realize it wasn’t just the straights who didn’t show up.

Look, back in the heyday of indie films (say the 1990s-early 2000s), the strategy was usually a limited release in just a few markets, usually New York, L.A., and Chicago because only in those cities did you have a prayer of getting the discerning types into a theater to maybe/possibly/hopefully create some buzz for your idiosyncratic, iconoclastic, genre-bending, cliché-busting, breath-of-fresh-air piece of cinema that might – I emphasize might — carry it outside those enclaves.  You weren’t going to debut Boogie Nights (1997)in Tallahassee, right?  And even then…no guarantees you were getting past those markets, and even in that golden period, a lot of them didn’t.  Point being that just because they cheered for Bros in L.A. is hardly a barometer of how a movie is going to play nationally.

Sure, maybe people in some parts of the country stayed away because the characters were gay.  Maybe some people stayed away because they still wake up screaming in the middle of the night haunted by nightmares of Sandra Bullock and Katherine Heigl romcoms that had Hepburn and Tracy looking down, going, “I’m glad we died when we did.”  Maybe the young audience that drives the megabuck heroes-in-tights/big action stuff which rules the top of the box office (four of the Top Ten were Marvel flicks, three were actioners) could care less about who’s smooching who between the yuks; it’s just not their thing.

Movie-going dynamics change.  Sometimes it’s a change in generational sensibilities, sometimes it’s the effect of changes in the media landscape, sometimes, well, dammit, sometimes they just change.  Back in my day, All the President’s Men (1976) could be one of the top-earning movies of the decade and the big action climax is watching Robert Redford and Dustin Hoffman…typing.  Again, not just a big earner in its year, but one of the big money-makers of the entire 1970s.  Spotlight – a kinda/sorta similar flick similarly praised and which won Oscars for Best Picture and Best Original Screenplay – released in pre-pandemic 2015, couldn’t crack the Top 20.  It couldn’t crack the Top 50.  Came in #98 for the year.  Paul Blart:  Mall Cop 2 came in #40 and earned almost three times as much.

There’s not a filmmaker of any appreciable quality who can’t point, with a sorrowful face and obvious pang of the heart, to a movie they made that was praised, maybe even later considered some kind of a classic, that didn’t die an ignoble death at the box office.  Just offhand, I’m thinking Lumet and Prince of the City (1981), Ridley Scott and Blade Runner (1982), Scorsese and Casino (1995), David Fincher and Zodiac (2007)…  Hell, Orson Welles and everything he made…

Complaining about the movie-going audience not living up to its responsibilities (and, in essence, that’s what Eichner and McDonagh seem to me to be saying) is like complaining lions are cruel because they eat cute, defenseless antelope.  Well, that’s just what they do…lions and audiences.

This is apparently going to come as a surprise to Messers Eichner and McDonagh but people don’t go to the movies out of some moral obligation to support either the message of a movie, the noble motives of a filmmaker, or even just plain ol’ good mature storytelling for grown-ups.  They go because they want a night out.

Look, I loved Nomadland (2020).  I thought it was a beautifully made, affecting film.  I thought it well-deserved its Oscars for Best Picture, Best Director, Best Actress.  U.S. box office?  $3.7 million.  I can tell you why; because I don’t know many people outside my small circle of art house cinema snobs who want to spend a couple of hours of their Saturday night and forty bucks for tickets and popcorn to watch a woman who has lost everything try to survive living out of her hoopty of a van, roaming around the country taking shitty jobs to maintain her marginal existence.

I chafe a bit at this kind of commentary because it suggests, to me, that some people making movies need to get out more.  Looking at how the cultural wars have (literally) spilled out into the streets over the last six or so years, I’m not surprised Bros didn’t fly.  I’m impressed anybody had the guts to make it for theatrical release and I salute that.  But, Mr. Eichner, follow the news.  I’m willing to bet that anywhere one hundred miles east of Los Angeles and one hundred miles west of New York Bros was going to have a problem.  Unfair?  Yes.  Symptom of persistent anti-gay sentiments?  That’s at least in the mix.  Unexpected?  If you just dropped in from Mars, maybe.  Think of the fuss over Lightyear, mermaids of color, and the tizzy over a talented Black woman having the temerity – oh, my, the gall of that woman! – to play James Madison’s crystal flute, and Bros dying on launch at the box office seems as predictable as Confederate flags at a Trump rally.

Should people stop making these kinds of movies?  Hell no, although maybe they should rethink what release platform would be best:  streaming where a niche audience spread thinly across the 3.1 million square miles of the U.S. can find the film instead of theatrical release which requires them to show up in blocs.  But filmmakers of previous generations would advise these brave souls to remember:  making movies has always been the riskiest, most expensive of entertainment gambles.  Every year supposed sure-fire hits die, and out-of-nowhere WTF releases strike gold.  It happens.  It’s always happened.  It’s always been an unfair, capricious, unpredictable business and undoubtedly always will.

You want fair?  Play a game with a referee.  Otherwise, bend over, grab the Vaseline and hope for the best because that’s as good as that business is going to get for you.

On This Day in Sports: Eric Lindros, After Hockey’s Weirdest Trade Saga, Made His NHL Debut 30 Years Ago

Frankenweenie is a Love Letter to Classic Monster Movies