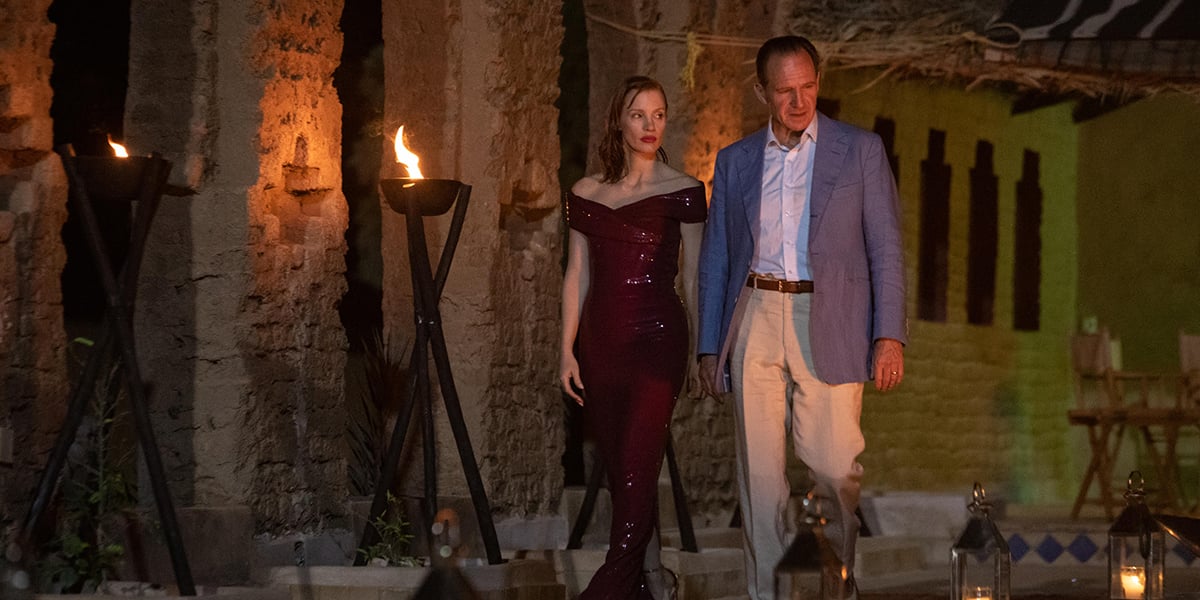 John Michael McDonagh appears to have two modes, much like his brother Martin (director of In Bruges and Three Billboards Outside Ebbing, Missouri): snarky social and political commentary, and contemplative brooding drama (with some wit). Deciding to instead separate those two modes, The Forgiven sees McDonagh making one part of a movie about the bourgeoisie continuing to live in a bubble when surrounded by desperation and struggle; and the other part about a wealthy white man forced to confront his reckless ways. While one person goes on a journey of healing, everyone else continues to party unabated in this extremely uneven, but mildly humorous dark comedy.

David (Ralph Fiennes) and his wife Jo (Jessica Chastain) are off to a weekend getaway in a castle in the middle of the Moroccan desert, hosted by their friends Richard (Matt Smith) and Dally (Caleb Landry Jones). The couple almost makes it to their weekend retreat until they accidentally run over a young man trying to flag their car down in the dead of night to sell fossils. The accident threatens to ruin their weekend when the Father, Abdellah (Ismael Kanater) comes to collect the body and requests David come with him to help bury his child as a means of atoning for his sin. Reluctantly, he agrees, while Jo stays back with the party and gets wrapped up in a flirtatious romance with Tom (Christopher Abbott).

The only interesting part of McDonagh’s satire of the wealthy elite is in The Forgiven’s journey with David. He’s an alcoholic who is completely guilty of killing Abdellah’s son and he carries himself around like the world is a joke. He even remarks that the only way to make living even remotely palatable is to make fun of it. Meanwhile, he sits opposite the father of a grieving man expecting some form of forgiveness, whether it’s verbal or him paying some money.

Without Fiennes in the main role, it’d be a journey not worth taking, but he’s exceptional in roles like this. His dry comedy sputters out like vitriol reinforcing that he is a bitter man in a circumstance that doesn’t call for it. When it comes time to be reflective and acknowledge some change in his character, Fiennes is in his element, still able to be humorous without taking any of the edge off the emotional impact.

It’s everything outside of David’s story that is a series of debauchery seemingly only there to reinforce what is already known: rich people don’t care about the rest of the world. While Richard tries to ensure David does what David should do, Dally opines about the destruction of his party. Meanwhile, Tom sets his sights on Jo, someone who should be distressed about sitting in the passenger seat of a car that ran over someone but actually is just happy David isn’t around for the weekend. They all live in their bubbles and do their illicit activities knowing they are above the law.

It doesn’t make those portions of The Forgiven less fun though. There’s a colorful cast of characters, each one played by another great actor, all doing very good work. Abbott continues to be one of the best actors working today, and Smith keeps the entire party from feeling like it’s out of control. The others are less noteworthy but still fun. It just comes down to all of the scenes outside of David’s journey reiterating the same point as the previous scene. Juxtaposed against David’s arc, it makes sense why they’re there but they don’t need to be there so frequently.

The answer to why they’re there is obvious: the jokes must never cease. Easiest way to get comedy is to put a bunch of people who don’t care in a single setting and let them make fun of themselves and others. It’s funnier than watching a rich white man make amends for the pain he has inflicted. McDonagh has always struggled with trying to be both dark and witty, not understanding that there are situations where wit is not necessary. It undercuts the severity of the moment, and whether it’s intentional or not, it can only be done so many times before it feels like the screenplay is just insecure about going fully meditative.

Which is a shame because The Forgiven is at its best when it doesn’t depend on humor to invigorate audiences. At the end of the day, McDonagh hasn’t shown anything new or revelatory. He’s simply made another self-deprecating dark comedy afraid to really wrestle with its morals. Of course, it’s done in typical McDonagh fashion and that has its own merits that aren’t easily glossed over, but at the heart of The Forgiven is a story that never seems to matter to the film as much as it does to the one seeking atonement.

Skyfall: When James Bond Got Old