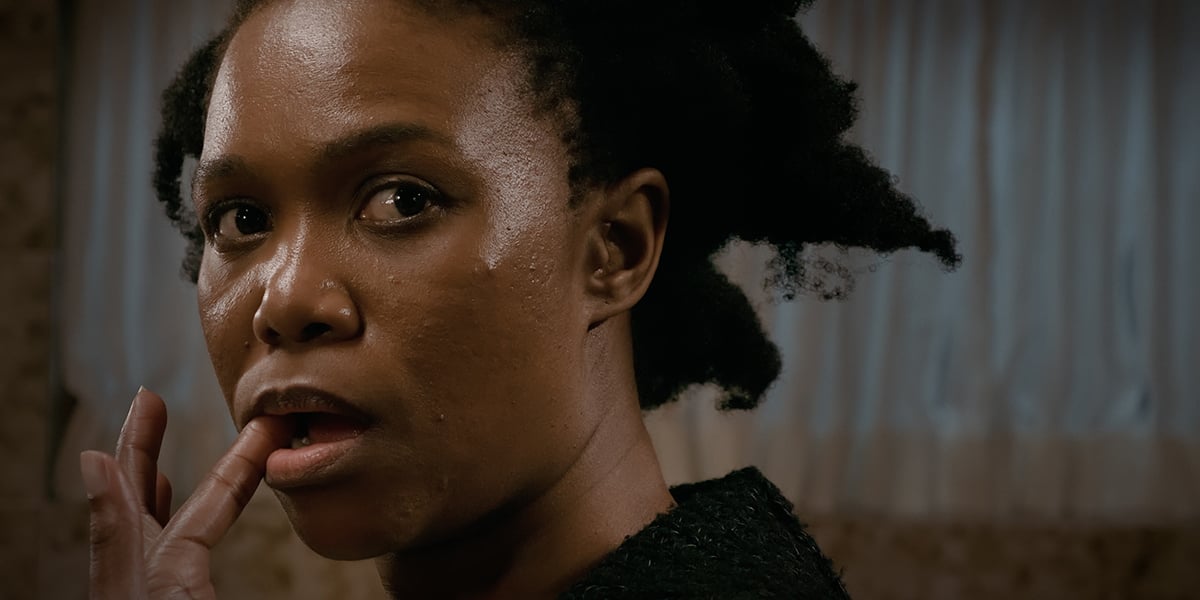 Creepy and unsettling, Mlungu Wam (Good Madam) is equal parts supernatural thriller and an allegory for apartheid-era South Africa’s power dynamic still felt today. Set in a single location – the house of a wealthy white woman who is close to death – Jenna Cato Bass’s psychological thriller turns a place of comfort into a nightmare, poring through decades of oppression and trauma to manifest a permanent, lingering evil.

When Tsidi (Chumisa Cosa) takes her daughter to live with their estranged mother, Mavis (Nosipho Mtebe), she already knows what kind of home she’s bringing her daughter into. There aren’t many rules within the house, but there’s one crucial one: do not go into the bedroom upstairs. In it lies Diane (Jennifer Boraine), the owner of the property and employer of Mavis who takes care of her and the home as Diane is currently bed-ridden and cannot leave her room.

There’s so much more under the surface though, and Bass utilizes repressed memories with both Tsidi and the house itself to uncover a darker, more sinister plan at work. The screenplay is reminiscent of other horror satires such as Jordan Peele’s Get Out – taking a time and place thought to be eradicated and revealing its current hold on society. The way Mavis rushes to Diane’s aid whenever summoned, refusing to change anything in the house itself, and running a tight ship so nothing goes wrong in her home, all hearken back to an era of domestic servitude.

The ringing of a bell to call for Mavis only amplifies a level of tension in Good Madam, with exquisite sound design across the board. The faint moans heard from Diane’s bedroom raise the creep factor to absurd heights while Tsidi becomes overwhelmed by strange whispers and hallucinations in the house itself. It all comes back to that bell though, holding a significant power over Mavis as well as historically.

Good Madam always has something to say as it pokes at Mavis and Diane’s current relationship. It doesn’t hide its supernatural twist, but it understands that reality is just as frightening. Of course, once the film kicks into overdrive and begins unveiling its more overt horror concepts, it pays off the tension with an insane climax that barely leaves a moment to breathe.

Chumisa Cosa’s incredible performance is part of the reason it’s so hard to watch some of the events transpire. Her character is both a mother and empathetic towards her own mother, giving Cosa a wonderful palette of emotional depth to work from. Uneasy, worried, and stubborn, Cosa runs the gamut with moments of horror in between that consistently impress. Countering the calm, collected performance from Mtebe, it makes for a compelling dynamic and the two give the film a lot of texture.

The unfortunate fact of Good Madam though is it’s very transparent in spending quite a bit of time setting up for a wild third act. Obviously, it’s going to let loose and it would be disappointing if it didn’t after all the fantastic bits of suspense expertly placed throughout. However, it also doesn’t quite leave a lasting impact after the credits like you would expect because its conclusion doesn’t stick the landing thematically. Instead, it trades psychological horror for a straight-up horror film and while it’s extremely satisfying to watch at the moment, it loses some of the film’s previous impact.

By the end, Good Madam is a solid horror film that pays off every bit of horror preceding it while leaving a bit of its soul in the dust. Commentary on the apartheid is still alive and thriving by the climax, feeding into why it exists in the way it does, but it also feels pushed to the background while Bass flexes her horror muscles. She doesn’t fail to impress on that front, but Good Madam ends feeling like it needed something extra to push itself further.