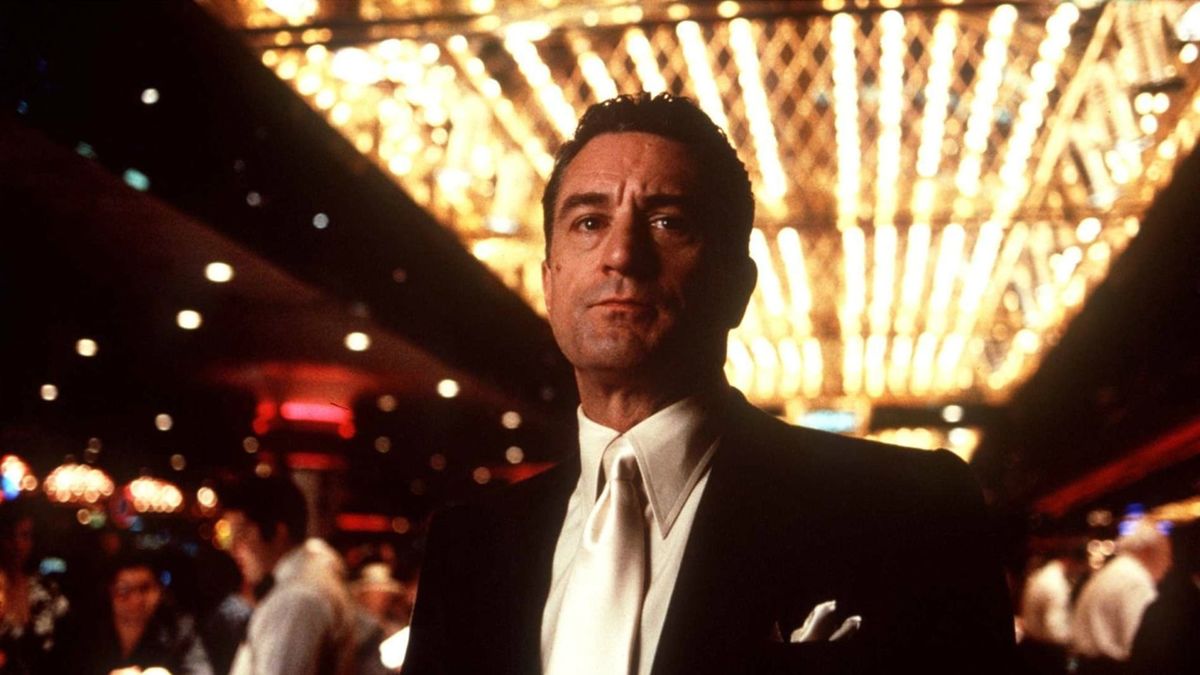 When Martin Scorsese released his long-gestating Robert De Niro collaboration The Irishman in 2019, it inevitably drew comparisons to his earlier organized crime films, particularly Mean Streets (1973) and Goodfellas (1990). The Irishman seemed closest in scope to Goodfellas, as opposed to the more intimate earlier film, but its tone was elegiac where Goodfellas was exuberant. But missing from much of the conversation was any discussion of the auteur’s 1995 film Casino, which set much of the template for his most recent mob movie. It’s a film suffused with regret, a symphony of failure that stems from one man’s overriding desire to be loved. Casino could never be as buoyantly fun as Goodfellas, but 25 years on from its release it seems like the strongest and most interesting of Scorsese’s mob pictures.

For Casino, Scorsese again collaborated with Nicholas Pileggi, the true-crime author who had written the book Wise Guys, which he later adapted into Goodfellas. This time around, the director caught wind of Pileggi’s newest project and urged him to write a screenplay first, as he was anxious to film it, before going back to write the book. De Niro would return to star, making his first film with Scorsese since 1991’s Cape Fear, and his last for him until their late-career renaissance with The Irishman. This time, he plays Sam “Ace” Rothstein, whom Pileggi modeled after the real-life casino fixture Frank “Lefty” Rosenthal after reading an article from a Las Vegas newspaper about his conflicts with his wife, a topless dancer. But unlike Goodfellas, which was wrapped up in the personal rise and fall of Henry Hill, Casino would encompass larger historical aspects of the mafia in America, an approach Scorsese would return to on The Irishman. Ace, who narrates much of the film, often reminds the audience of the shadowy figures pulling all the strings, even if he’s the public face of the Tangiers Casino. He reports to a cabal of mobsters who meet in Kansas City, Missouri (changed from Chicago, likely for legal reasons), where they dictate much of what goes on in Vegas, even though local elected officials would like to believe that they’re the ones in charge. The film also shows the way the Teamsters union was overrun by mobsters, which Scorsese would explore in greater depth in The Irishman. Casino makes a great prologue to that film, as it focuses on the people who visibly flaunt any hint of respectability, while Frank Sheeran and Jimmy Hoffa life double lives as respected members of society in The Irishman.

Though he expands his scope in satisfying ways, Scorsese never completely abandons his focus on the personal. The film opens with a burst of fire, as Ace is blown up by a car bomb as he starts the ignition. But first, he explicates his downfall via narration. “When you love someone you gotta trust ’em … there’s no other way,” he says somberly, before adding, “And, for a while, I believed that’s the kind of love I had.” Ace is a master bettor and handicapper, but he’s completely blind to his odds when it comes to love. He becomes smitten with Ginger McKenna (Sharon Stone) a craps hustler who knows how to keep men gambling for days on end, all the while supplying her with luxurious goods and plenty of tips. Ace’s infatuation with Ginger is only partially returned; she comes to him for the clothes and wealth that she desires, but she’s emotionally connected to her pimp Lester Diamond (James Woods at his sleaziest best). It’s never explained why she’s so dependent on a man who abuses and gaslights her, but the film seems to suggest that older wounds left her craving the relative stability of Diamond, to the point that she’s not able to give him up in favor of Ace.

Added into the mix is Ace’s old pal Nicky Santoro (Joe Pesci), who initially acts as his enforcer, before becoming a wildcard who hastens his downfall. Nicky shares the psychopathy and jumpiness of Pesci’s Goodfellas character, but without the charms and dark humor. He’s all animal urges, which Ace notes in an early scene in which Nicky viciously stabs a man in the neck with a pen in retaliation for a rude remark. He isn’t able to control himself, especially not when tempted with the riches of Vegas, and he confirms as much when the narration briefly switches to his perspective. “It should have been perfect,” Nicky says, briefly taking over from Ace. “But in the end, we fucked it all up.”

The dissolution of Ace’s relationship with Ginger mirrors his loosening grip on the Tangiers, though his marital instability also plays its part in harming him professionally. Though he has few moral scruples, he’s not quite the empathy-free psychopath that Nicky is, and the love that he craves from his wife eats away at him and clouds his judgment. Although she never really loves him, he deludes himself into thinking that all is well once they get married, only to realize that they were always on a shaky foundation. Scorsese underscores that realization by using snippets of Georges Delerue’s gorgeous score to Jean-Luc Godard’s Contempt, his favorite film from the French New Wave icon. In Godard’s film, a writer of crime novels loses the love of his wife in a single day after he takes on a disastrous project writing a screenplay for an adaptation of The Odyssey. Scorsese doesn’t just use the music to signal the dissolution of Ace’s marriage, but also the vanishing western paradise of Las Vegas, where he and his cronies thought they could run things their way, far from interfering eyes.

Ace’s narration looks back on all of his failures, like his marriage and his inability to make Ginger love him, and his ineptness at running a casino and reining in his henchmen. In the film’s final moments he’s visibly aged as he places bets on a horse race from his home in San Diego. “But in the end, I ended up right back where I started,” he says, as if it was only a lateral move, but his tone betrays the regrets leading up to his current state. “And why mess up a good thing?” he adds, his way of lying to himself. In the moments before, he’d outlined the fall of mob-controlled Vegas, as well as Ginger’s own lonely last days at a seedy motel. He puffs himself up as if everything is fine, but he knows he has lost it all. There’s a more obviously heart-breaking moment of regret and grief that ends The Irishman, but Scorsese explored those emotions first (and better) nearly 25 years beforehand in Casino. It can never be the most enjoyable of Scorsese’s crime films, but it increasingly seems like the best of the bunch as time goes on.