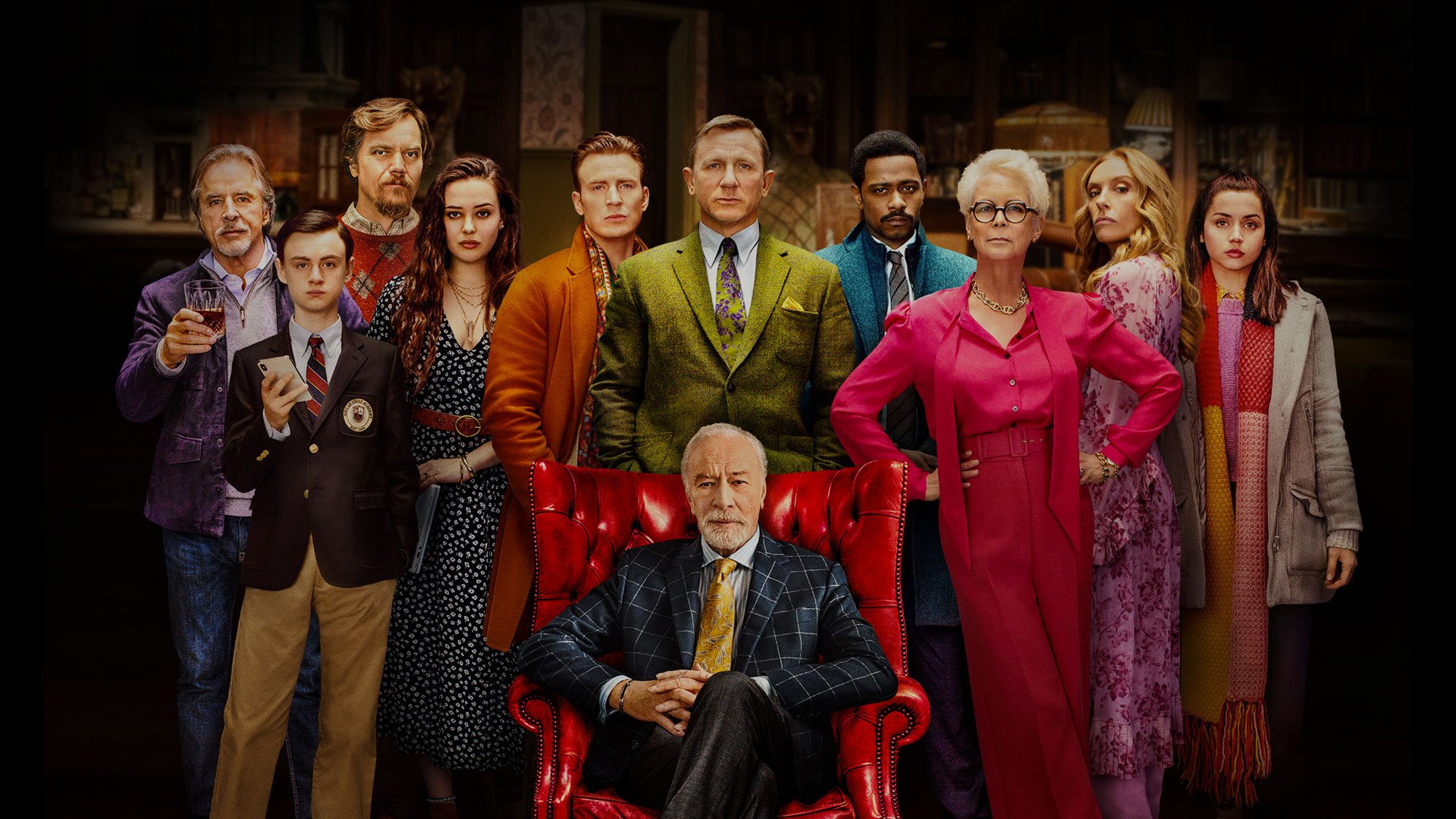 Knives Out is a 2019 mystery film written and directed by Rian Johnson. The film follows detective (“gentleman sleuth”) Benoit Blanc as he works to unravel the events leading to the death of mystery writer Harlan Thrombey while contending with the dysfunctional Thrombey family and a pair of police officers investigating the suspicious death. It stars Daniel Craig as  Blanc, with Chris Evans and Ana de Armas leading the ensemble cast. Despite only having seen it for the first time less than three years ago, it has become one of my favorite movies of all time and a regular viewing.

This film follows a fairly conventional murder mystery structure in the vein of Agatha  Christie’s best work – a body is found, the suspects are introduced, a master detective takes on the case, a second body is found, there’s a significant plot twist, the killer is revealed. The detective and hero win the day. The first act of the film sees Harlan Thrombey’s (Christopher  Plummer) death, introduces Marta Cabrera (de Armas) and the Thrombey family to Blanc  (Craig), and sets up the stakes of the film. The second act is the bulk of the film – it shows the events leading to Thrombey’s death through an extended flashback, introduces grandson Ransom  Drysdale (Evans), features the ‘twist’ as Cabrera is awarded Thrombey’s estate, and shows the lengths to which Cabrera and Drysdale go to conceal her perceived involvement in Thrombey’s death from Blanc and the two officers. The third act shows Marta discovering what would later be revealed as Drysdale’s murder of housekeeper Fran (Edi Patterson), the reveal of Thrombey’s blood toxicology report, and the final confrontation among Blanc, Cabrera, and Drysdale.

As I have learned over the last few weeks, it is not easy to conceive of and develop an original murder mystery. While Knives Out and its sequel, Glass Onion, have partially inspired me into a sense of thinking, ‘hey, I can do this!’, Rian Johnson has developed a formula so airtight that he and Craig could make a dozen Benoit Blanc mysteries together and they’d all be top-notch. Admittedly, I am not there yet. Much of the strength of this film comes from the performances of Craig, de Armas, Evans, and Plummer, but Johnson’s script and story provide the bedrock upon which his actors can flourish. Furthermore, Knives Out arrived at a point in  Johnson’s career at which he had the pedigree to direct his own work and assemble a perfect cast. The success of Looper and Star Wars: The Last Jedi gave Lionsgate enough to view a  Johnson film as a likely commercial success, and it is Johnson’s genius as a writer-director that paves the way for critical success here as well. Johnson waited more than ten years to make this film, but his patience is rewarded with one of the best all-around films (from script to screen) in recent memory.

One of my favorite elements of this film is its subtext. We learn early in the film that none of the Thrombey family members can be fully trusted, due to the nature of their conflicting accounts of the night of Harlan’s death. Johnson presents Linda (Jamie Lee Curtis), Walt  (Michael Shannon), and Joni (Toni Collette) as unreliable narrators to keep the audience in the dark as to who the biggest threat may be – and it isn’t until Ransom shows up in the second act that we start to suspect his involvement (but even then, he makes himself out to be an ally to  Marta). Another note on subtext – separate entirely from the mystery itself – Richard’s affair is a

minor subplot to the film, but through the course of the story, he causes his own discovery by  Linda. He throws a baseball out of Harlan’s office, the baseball is picked up by Blanc, thrown for one of Harlan’s dogs, and delivered to Linda, who returns it to the office and discovers Harlan’s encrypted letter disclosing Richard’s infidelity. It’s not even a major element of the story, and there’s a nearly unfathomable level of attention to detail.

Technically speaking, the production design is almost the most significant element of this film. The Massachusetts estate used for the exteriors (and I hope at least some interiors) of  Harlan Thrombey’s country house almost becomes a character itself – the slim doorways, creaky staircases, hidden libraries, and trick window add so much to the film that use of another location may have lessened the final product. The prop master deserves credit as well – the opening sequence with quick shots of different items around Harlan’s house, Harlan’s office and library sets, the knife throne, a handful of portraits of Christopher Plummer in varying emotions, et cetera. Detective Lt. Elliott (LaKeith Stanfield) is essentially an audience proxy to Blanc’s  methods of solving the case, and he says it best (as a brilliant and subtextual fourth wall break) – “The guy practically lived in a Clue board.” The mystery is enhanced by how intricately-planned every detail of production design, props, and costumes truly is.

I would be remiss not to mention the performances of several actors that further elevate the quality of the film. Chris Evans entirely sheds the ‘good guy’ Captain America persona he had held for eight years and dissolves into Ransom Drysdale. His arrogance and ‘only child’  behavior completely transform the image I had previously had of Evans into something entirely different – an actor with remarkable range. Michael Shannon, with that facial hair and a limp,  makes for a perfect red herring murderer. He has such a great way of coming across as off-putting without becoming creepy that he makes Walt a fascinating character to follow. Ana De  Armas is outstanding as Marta – her innocence and perceived guilt (as great as that dichotomy is)  play beautifully, and she has genuine chemistry with both Evans and Craig throughout. As much as I would watch a thousand more Benoit Blanc mysteries with Johnson and Craig involved, I  want to see a dozen more buddy cop movies with Lakeith Stanfield and Noah Segan. They complement each other as partners in the most bizarre way, and their relationships with Blanc are some of the best parts of the film. Finally (saved the best for last), Daniel Craig does as Evans does by leaving 007 behind to become Benoit Blanc, complete with a ridiculous wardrobe and an even more ridiculous Savannah drawl. Craig develops his mannerisms and own unique language  (“doughnut hole in a doughnut’s hole,” “Nazi child masturbatin’ in the bathroom,” “regurgitive reaction to mistruthin’,” etc.) that Blanc elevates above the stereotypical strait-laced, world-weary, Poirot-esque detective into something entirely new within the genre. He deserves all the plaudits in the world for his performance, and again – I would watch as many Blanc mysteries as possible, and I’d likely love everyone.

Johnson had a tall task building an original whodunnit as his next film after a Star Wars project, but his script (and execution of the script as a director) creates one of the best murder mysteries I’ve ever seen. Knives Out is phenomenal. Glass Onion is also phenomenal. Johnson has a bona fide juggernaut of a mystery franchise on his hands – not to mention he has partially inspired me to write my own whodunnit. Knives Out brings together an all-star cast with amazing chemistry, an all-time-great production design, and a layered, thoughtful, deeply funny, and compelling script to become an already historically great film. Long live Benoit Blanc.

The Long Goodbye: Nothing Says Goodbye Like a Bullet