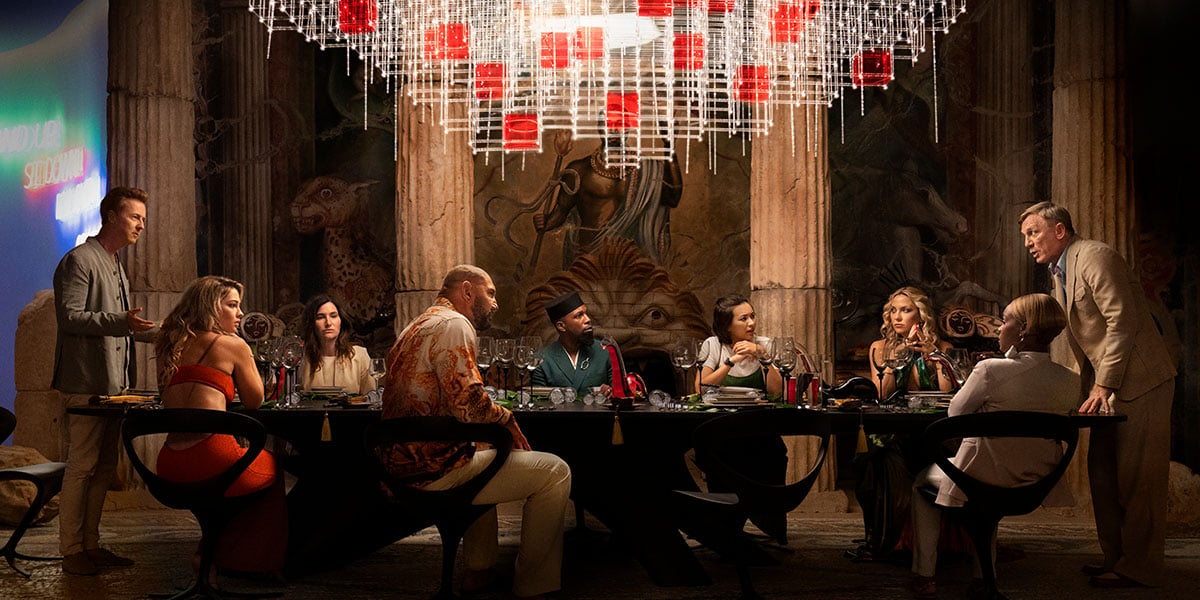 Back in 2019, Rian Johnson debuted Knives Out, a murder mystery which, unlike his polarizing previous film Star Wars: The Last Jedi, was loved by almost everyone who saw it. The film introduced the fantastic character of Benoit Blanc, the Southern dandy private detective who solved the mystery of a plot to kill an elderly mystery novelist with a mooching family.

Sequels were quickly announced, with Netflix taking over, and now the first of them, Glass Onion: A Knives Out Mystery, has debuted at the Toronto International Film Festival, about three years to the day after the first film.

It gets off to a bit of a slow start, but something clicks about halfway through and it’s nothing but glorious payoffs until the end. While it’s missing the element of surprise, Glass Onion is very nearly an equal of the original Knives Out. It’s buoyed by a great performance from Janelle Monae, in the best turn by any performer in either movie.

Glass Onion includes none of the original film’s cast, except for Craig-as-Blanc, and moves the location from New England — where the characters were all dressed for winter — to a Greek isle, where both the color palette and the wardrobe are very different. The film is also set in the early days of the pandemic, and the ingenious way it gets around protocols and masks brings to mind that line in Thank You For Smoking about “good thing we invented the, you know, whatever device.”

The plot of the movie centers around an eclectic group of rich friends, led by a billionaire entrepreneur (Edward Norton), and also including a fashion influencer (Kate Hudson), the governor of Connecticut (Kathryn Hahn), a men’s rights Twitch steamer (Dave Bautista) and Norton’s former business partner (Monae) who has been estranged from the group. Also on board are the streamer’s bikini-clad girlfriend (Madelyn Cline) and Hudson’s assistant (Jessica Henwick.)

The film starts out with the group invited to Norton’s Greek island, for a “murder mystery,” with Blanc invited to help solve it.

The story starts out a bit sluggishly, but a second-act twist puts things on the right track, and it’s nothing but satisfaction from that point on. I won’t give away too much, but I can say that Johnson’s eye for big spectacle, which was on display in the best moments of The Last Jedi but less so in the first Knives Out, is there in a huge way here.

The characters are fantastic creations, starting with Hudson, a vapid fashion celebrity who continually gets “canceled,” but always seems to bounce right back without any trouble. Bautista’s character is a successor to the creepy alt-right teenager in the first Knives Out, while Hahn is pretty clearly meant to represent a certain type of sellout Democratic politician. But Monae is the standout, as a character who ends up in a very different place than where she started.

I can also say that the first film’s “eat the rich” ethos is very much in evidence again, and the entire movie can be read as an extended subtweet of Elon Musk, to the point where I’m already treading the point when Musk gets wind of this and starts a Twitter feud about it (Johnson has been through worse, just on that platform.)

Benoit Blanc is a character in which the possibilities are basically endless, so expect many more of these films. And I expect them to continue being very good.

Netflix hasn’t yet announced its release plans for Glass Onion, but considering how well the film’s surprises played to an audience, it would behoove them to plan a sizable theatrical release.