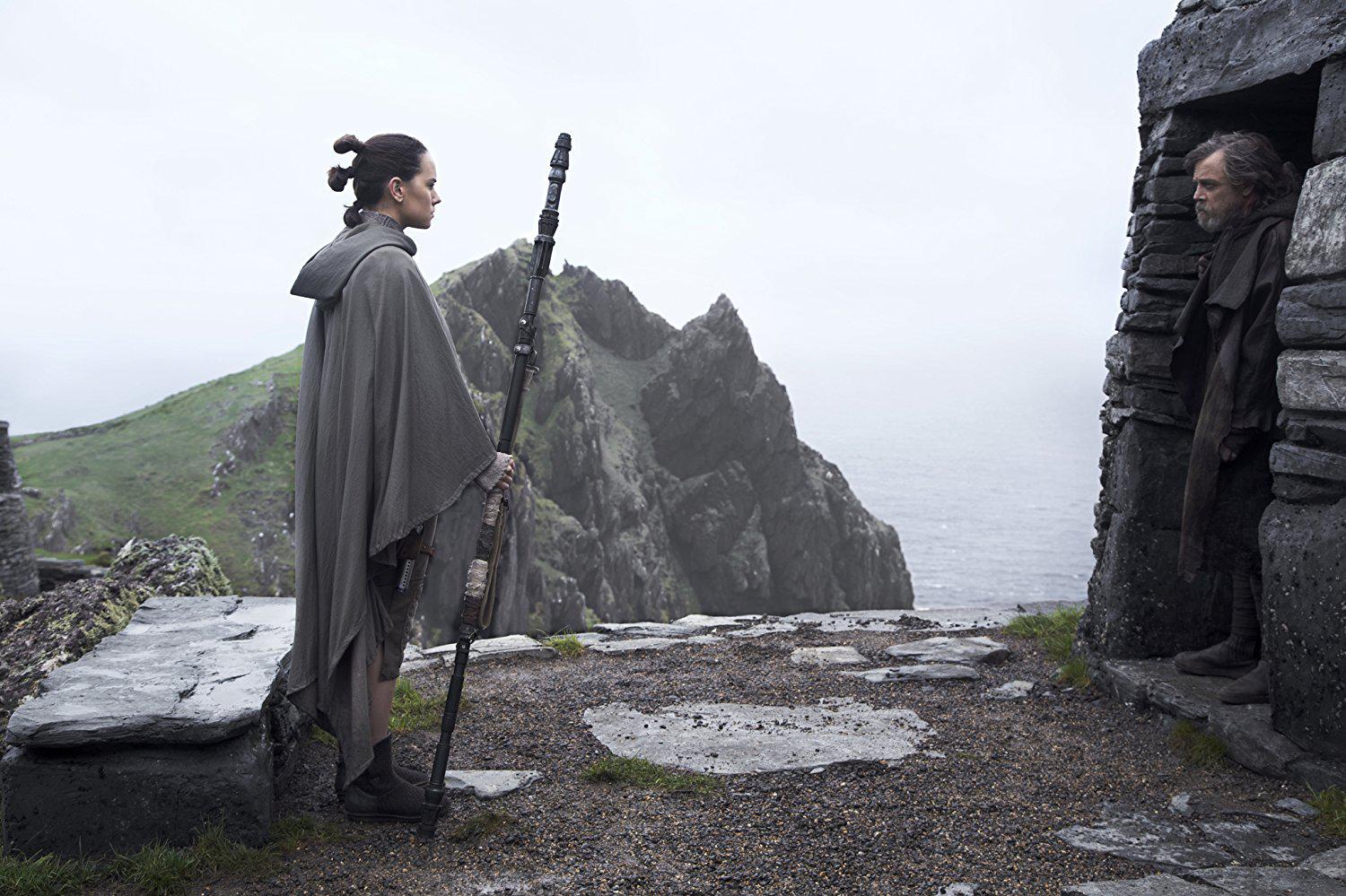 As if trying to make some sort of point to die-hard fans who cling to the high standards set by their beloved original trilogy, Star Wars: The Last Jedi rarely misses an opportunity to hammer home that priorities in this belabored universe should and will focus around those with a future, those with the opportunity to establish themselves beyond the deep shadow cast by old legends now turned old fogies. Never mind that this latest trilogy has so far relied heavily on the past; it’s all in good Disney fun, a chance to playfully subvert expectations and bring the franchise more in line with their other cash cows. Star Wars as many of us remember it is dead, folks; the Force didn’t awaken as its old self, and it probably never will again. However, while what has taken the place of George Lucas’ fairy tale vision might not provide the cinematic nourishment of yore, The Last Jedi shows that this Marvel-like product can still entertain with a steady dose of humor and a skilled hand piloting the ship.

It could easily be debated whether the story of The Last Jedi matters to anything at all — save for a few points, one could skip it almost entirely and most likely still understand whatever comes next — but it does have one of the goofiest premises in the series (or any other), stretching the idea of a feature-length chase scene to the point of cheesy audaciousness. Basically, the New Order has the Resistance on the run, and so a large fleet of large ships follows behind a smaller fleet with smaller ships, casually bombarding their vulnerable prey with lasers in one of the slowest pursuits in cinema. It’s up to General Leia, Poe Dameron (with a welcome increased role), Finn, and some others to figure out how to keep their ragtag band (and hope for the galaxy) alive. Meanwhile, Rey is on an island with Luke Skywalker (Mark Hamill, auditioning for Grumpiest Old Men), trying to convince the former Jedi to come back and save the day.

Strangely, it’s a mix of the bombastic fireworks display that was The Force Awakens (albeit with a far superior pacing), meta-humor that encroaches on Avengers territory, and a sincere effort at depicting nuanced conflict. Despite a few moments of eye-rolling ridiculousness that recall — yes, I’ll say it — the much-maligned prequels, it works on its own terms, pretty much like Guardians of the Galaxy with lightsabers. Splitting up all the main characters and sending them planets apart means that any additional development in their relationships is out of the picture, but did anyone really believe these people as good friends anyway? Or even as people, period? Sadly, The Last Jedi doesn’t give much room to breathe in this department, though Adam Driver does manage to find interesting deliveries that imply a deep-down complexity the others can’t match. That the eternally mopey Kylo Ren is the most fascinating person in the film is not necessarily a bad thing though, and the ambiguity behind his figurative mask is a welcome bit of serious unpredictability.

Star Wars: The Last Jedi seems like closure for those hoping for a return to the traditional storytelling of the original trilogy.

Like its predecessor, The Last Jedi rushes from scenario to scenario, rarely taking time to let anything sink in (perhaps knowing that would be its downfall), but director Rian Johnson knows how to inject mystery and excitement in a flash, even constructing a few powerful interactions in the process. His camera placement is top-notch (this is how you take inspiration from a classic), and he and cinematographer Steve Yedlin compose flashes of moody beauty wherever they go, rolling with the variety while creating schemes that keep the multiple locations visually distinct, yet cohesive. We know where we are, and what everyone is doing, and these days that’s a plus. Just when the conventional juggling of story threads seems to be wearing a bit thin, a fresh plot surprise or burst of color brings the film back to life (a few classic music cues don’t hurt either in getting the heart pumping). Johnson clearly also has a handle in the jokes department, scoring some well-timed quips and gags, even if many of them feel a bit too self-referential or spoofy for a Star Wars film. Again though, this isn’t your daddy’s Holy Trilogy.

Because every middle entry (or any half-decent entry, for that matter) must be compared to the pinnacle that is The Empire Strikes Back, so too will The Last Jedi, but this seems a tad unfair. Really, the two have little to do with each other in tone, structure, or objective. Whereas Episode V uses its characters’ spiraling personal situations as a metaphor for the Rebel Alliance’s precariousness as a whole, here the stakes are more literal, and the tone has a tinge of upbeat spirit that doesn’t even try to replicate the overcast doom and gloom of its ancestor. The Last Jedi wants to wow audiences, not make them contemplate ancient wisdom or spiritual connections. Anything requiring more than a line or two to consider is glossed over as quickly as possible in favor of efficient exposition, no matter how awkward. There is one exception to this that emerges as a pleasantly interesting recurrence, but whether it eventually leads to somewhere of value is anyone’s guess.

No, The Last Jedi is not about examining mythic archetypes, heroic journeys, or even logical human behavior (a later subplot forces drama to the brink of obvious unbelievability). It’s about fun, and there’s plenty to be had. A running time usually saved for self-indulgence instead breezes by quickly, whisking the audience away before any realization sets in, and the action is expertly put together, filled with just the right amount of old assets and new additions to play off the desire for both nostalgia and novelty, with a good-natured vibe lacking from the shameless fan service that was The Force Awakens. It’s a far better film than the last, even if they share a certain shallowness. Fans should beware that Disney does not seem very interested in diving deep into any lore, and though questions are certainly addressed in this sequel, many may take issue with the nonchalance of the answers.

Most importantly though, Star Wars: The Last Jedi seems like closure for those hoping for a return to the traditional storytelling of the original trilogy. This is the kind of well-oiled machine that signifies a Disney property, and no matter how much care and craft Rian Johnson has brought to the proceedings, the heart of beloved classics will have a hard time being resuscitated with the required modern formula. However, as some people in The Last Jedi try to make clear, maybe it’s time to let the old ways go. It’s a Disney universe now; we’re all just living in it.

Everything Wrong With Star Wars: The Last Jedi

50 Years Later: What We Can Take From ‘Valley of the Dolls’