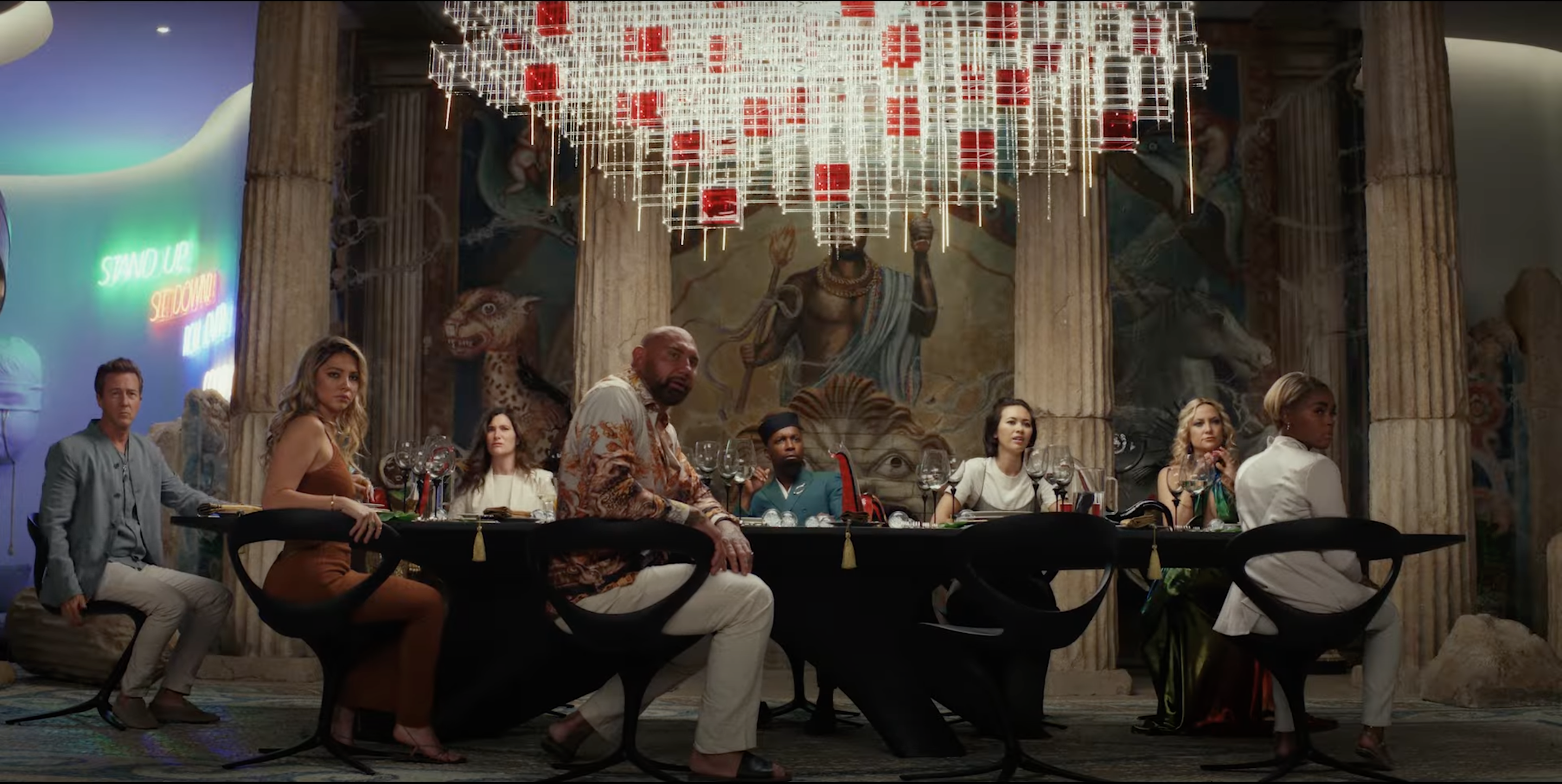 How does Rian Johnson follow up Knives Out, his wildly successful update of the murder mystery genre? The writer-director opts for the classic sequel formula of heightening the stakes and action and does so without losing much of the soul that made the original, such a breakout hit.

With Glass Onion: A Knives Out Mystery, the signature elements of a Beniot Blanc mystery become more clear: star-studded casts, quirky humor, social commentary, and twists a plenty. While a measure of magic is lost in the second installment of the series, Johnson delivers another playful and engaging puzzle for both his detective and the audience to solve.

Johnson’s latest continues the winning charm of Benoit Blanc (Daniel Craig) and his delightful subversion of the Daniel Craig persona. If you liked his molasses-thick drawl and playfully vigilant disposition during the Thromby case, you’d be happy to find not much has changed. Benoit swaps his Brooks Brothers topcoat for boldly striped swimwear and an assortment of neckerchiefs as he heads to a Greek island owned by charismatic and talentless tech billionaire (sound familiar?) Miles Bron (Ed Norton).

In the midst of the Coronavirus lockdown, we are re-introduced to Benoit, mid-bath, as he plays an online game with a truly-incredible group of cameo appearances. Sherlock-like, in his boredom and desire for a new challenge, he is roused by the dubious death of a young woman. Her ties to the billionaire set him off on his next case.

Johnson layers his murder mysteries with cutting social commentary, particularly the ego-driven hypocrisy engendered by power and money. In his latest, each of the guests, despite their differing views and occupations, is dependent on funding from the “golden tit” of Miles Bron. Johnson highlights the issues with the immense power wielded by dumb and annoying people thanks to the concentration of enormous sums of wealth. Regardless of how famous each of the guests is, they are ultimately beholden to a shitty rich huckster. That is, all the guests except for Andi.

Monae is superb in a duplicitous role that requires her character to perform as someone else half the time. In league with Benoit, Andi clandestinely takes on much of the detective work.

The party-mix ensemble casts are another appealing element of the Knives Out series. The mix of talent creates lots of opportunities for engaging interactions, with some casting decisions creating a knowing wink from the director to the audience. In this case, Hudson delivers an absolutely sparkling performance reminiscent of her rom-com heyday in a role where her character is in need of a boost in her career. Bautista is perfect for the meathead misogynist, offering a mini Spectre reunion with Craig.

Not all of the talented cast are used to their potential. Claire and Lionel are the two voices of reason in the group which hamstring the performances of Hahn and Odom Jr., respectively. Hahn’s senator is uptight and straightforward, giving us the neurotic flavor of Hahn instead of the colorful and wild characters that made her so beloved. Talented beyond her big comedic roles, she doesn’t have enough opportunities to shine.

A disadvantage Glass Onion has to Knives Out, is the sheer surprise of Craig’s celebrated detective. The novelty of seeing the man most famous for playing one of the most British characters in history as a gentlemanly southern detective was one of the standout features in Johnson’s bag of tricks in Knives Out. A similar subversion was skillfully employed years earlier by Steven Soderberg in the criminally under-discussed Logan Lucky. The out-of-nowhere performance remains fresh throughout Knives Out with each successive scene coloring in the bespectacled silhouette Craig cuts.. With Glass Onion, we’re already familiar with Benoit and what he does. While it’s still a blast to see him in his jaunty little outfits, some of the enchantment is lost the second time around.

The biggest change is in the scale of the production and plot at the heart of the mystery. The wealth represented by the sleepy, gothic Massachusetts mansion is swapped for an ostentatious, sun-drenched compound with a glass dock that emerges from beneath the water. It’s a garish villa befitting a Bond villain. The importance of the mystery stretches far beyond a family’s inheritance and concerns a new type of energy that would have global implications. While Johnson has fun with his larger budget and all-around bigger movie, the scale adds little to the enjoyment of his whodunnit.

The effectiveness of these films are in Johnson’s well-plotted enigmas, all-star casts, and near up-to-the-minute references and social commentary. The success of Knives Out is an important win for stories not based on previously existing IP –though it’s a complicated victory.

Netflix’s decision to give Glass Onion the slightest of Oscar-qualifying theatrical runs was met with head-scratching disappointment, given its performance at the box office. There was clearly demand from audiences for a longer run, but, to Netflix, the strategy is for that demand to transfer to subscriptions not ticket sales.

In the end, anything that gives us quality Jackie Hoffman screen time is a triumph on its own

25 years ago: Titanic was, in Many Ways, the Biggest Movie Ever