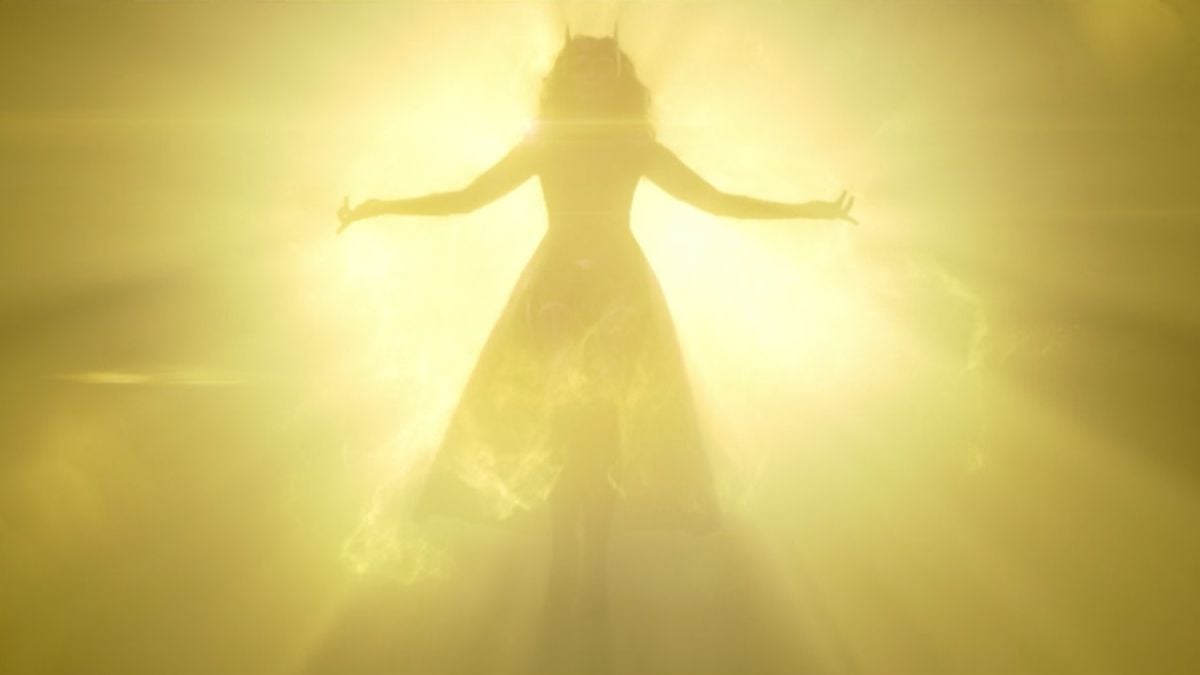 As the Scarlet Witch embraces her final form, WandaVision finally comes to a bewitching end this week on Disney+. The first major show to hit the small screen straight from the masterminds of the Marvel Cinematic Universe continued to reach new highs as it gloriously danced to the finish line with grace. Episode after episode, WandaVision always brought pizzazz, mystery, and laughs to the forefront, but now as the show is forced to confront its heartbreaking horrors it aims to end on a sweet albeit melancholy note. After an incredible penultimate meeting between Agatha Harkness and Wanda Maximoff, the inevitable showdown was ready to arrive and WandaVision nearly delivers on all of its promises. Episode nine “The Series Finale” may be the end of WandaVision or perhaps just another beginning for the future of Westview’s unwanted Avengers. Relentless on upholding its usual standards, the series is able to achieve what it does best as the misdoings within the fictional New Jersey location come to a bittersweet end.

Quite literally seconds after the ending of episode eight, WandaVision takes no time to get directly back into the ongoing standoff between Wanda and Agatha. As Wanda takes it upon herself to confront the witch of Salem’s past, Agatha helps her make new discoveries about both their powers and its many manipulative intricacies through her own knowledge. Meanwhile with the show’s other titular half, as the Vision prepares himself to face the inevitability of his demise he is forced to negotiate with a new version of his body that is being controlled by Hayward and his team. All while the madness of our leads takes the spotlight, the Federal Bureau of Investigation agent Jimmy Woo gets some final moments to shine as Monica confronts the mysterious Quicksilver “Fietro” inside the Hex to reach Wanda. Every plot point is tied together one last time for a thrilling final episode that might be packed with action yet manages to highlight a ton of heartfelt moments along the way.

“The Series Finale” takes bold moves as it has to make clear paths for the futures of many of its characters. The final episode surprisingly nails a solid pacing as it manages to keep all of its lines intact without having to make any needed cuts or close calls. The battle between Wanda and Agatha may take up the vast majority of the runtime, but that absolutely does not mean viewers are just left with mindless action before an emotionally thrilling finale. A well-directed battle enhanced by details left behind from episode eight is only the first bite into the delicious cake that is “The Series Finale”. The action is far from the focus on the finale. From plenty of thought-provoking moments with the Vision to standout lore-related reveals with both Wanda and Monica, WandaVision was out to create one last hurrah for itself as it elegantly placed what viewers loved about the show into one finishing bow. The result is a satisfying conclusion that is properly tied together by wrapping up its emotional conflicts in a very thoughtful way that does not simply end them but leaves them on a challenging note.

The most satisfying aspect of the entire ending comes from its heart-wrenching moments- or what I like to call, those Marvelous scenes the studio always hits hard with. Wanda’s decision to destroy Westview permanently will particularly give you all the feels. Not only does the character kiss her children goodnight for what is believed to be their final moments of life, but she says goodbye to her greatest desire: a concrete future- or perhaps even a family with Vision. The destruction of Westview is an absolute knockout star-studded moment as the slow descent from the children’s shared bedroom to the familiar yet cold living room comes to fruition for one last time in a beautiful manner. It is a proper way to close out on Wanda’s emotional struggle as she finally lets go of the past yet embraces the fact that perhaps the very moment in time she is experiencing may not be the end of what she loves most. The greatest crime WandaVision made was somehow making audiences care for characters who were doomed from their first appearance. Perhaps though Wanda’s final stance and that feeling of hope she carries is the perfect analogy for how everyone will emotionally be after witnessing the series finale.

The only aspect where WandaVision’s finale really disappoints is upsettingly in regards to Evan Peter’s character– however, this is something that is more so on the fans than perhaps Marvel Studios. The X-Men version of Quicksilver was no doubt hyped up since his first appearance in WandaVision, but his ending will leave fans unimpressed as their hopes and dreams for a favorite are all around crushed with a rather irritating joke. Agatha had poked fun at her husband since the first episode but no one could have predicted that these quips would actually pay off in the end as viewers discover Fietro is the lover of our antagonist. Poor Evan Peters ended up in the role of Ralph Bohner. While storywise the decision makes sense, for a character and actor that have barreled through mediocre FOX flicks with fans equally hoping for him to find success, there is no question why the decision to make this plot choice feels rather hurtful. With the amount of love surrounding Evan Peters and his character, there is no doubt in my mind that he will return in the future to his former role, but as it stands currently this was a rather upsetting shock.

Before we wrap this column up for possibly the last time- because who knows if the series will get a second season as Marvel has been hesitant on revealing their future phase plans for the television side of the Cinematic Universe- of course, we have to mention the after credits. It would not be a Marvel finale if there was not a cliffhanger to be left on and WandaVision was ready to deliver two. As Elizabeth Olsen is set to return in Doctor Strange and The Multiverse of Madness, viewers can already guarantee that the story of the Scarlet Witch will continue within the next two years as the titular hero begins to peruse the Book of The Damned that Agatha Harkness previously possessed. As for Monica Rambeau, her past finally comes to confront her as the Skrulls make landfall on Westview. Whether Monica will return to the movies or another television series soon is yet to be revealed, but the agent of S.W.O.R.D. has been placed on a path that will certainly keep audiences interested in her career as she embarks on likely a journey towards meeting Captain Marvel.

WandaVision’s finale had a lot resting on its shoulders and while it may not be the best episode of the series it is damn sure a fine conclusion to the story of Wanda and Vision as it presents a satisfying ending for the magical crisis of Westview. Even if it might just be a new beginning for the pair, WandaVision has built up a breathtaking amount of potential to tackle in the future if it ever decided to return to the small screen. Marvel’s hesitancy to let go of Vision is concerning and comes with a cost, but with how well executed the Cinematic Universe is when it comes to the long-term game perhaps this current predicament should be nothing more than an afterthought. This is certainly not the end of Wanda Maximoff and her family. The wise decisions to focus on the internal conflict of our Avenger ultimately bred a series that oddly stood out from the rest of the MCU while being able to do its own shtick constantly. Now that she has conquered her internal troubles (for the most part) the time for the Scarlet Witch to reach her peak is nigh. WandaVision is only the beginning of the Avenger’s journey into a dangerous future across not only just her world but a cosmic infinity of alternate scenarios and outcomes.

The Stand: A Middling Take on Stephen King’s Apocalypse