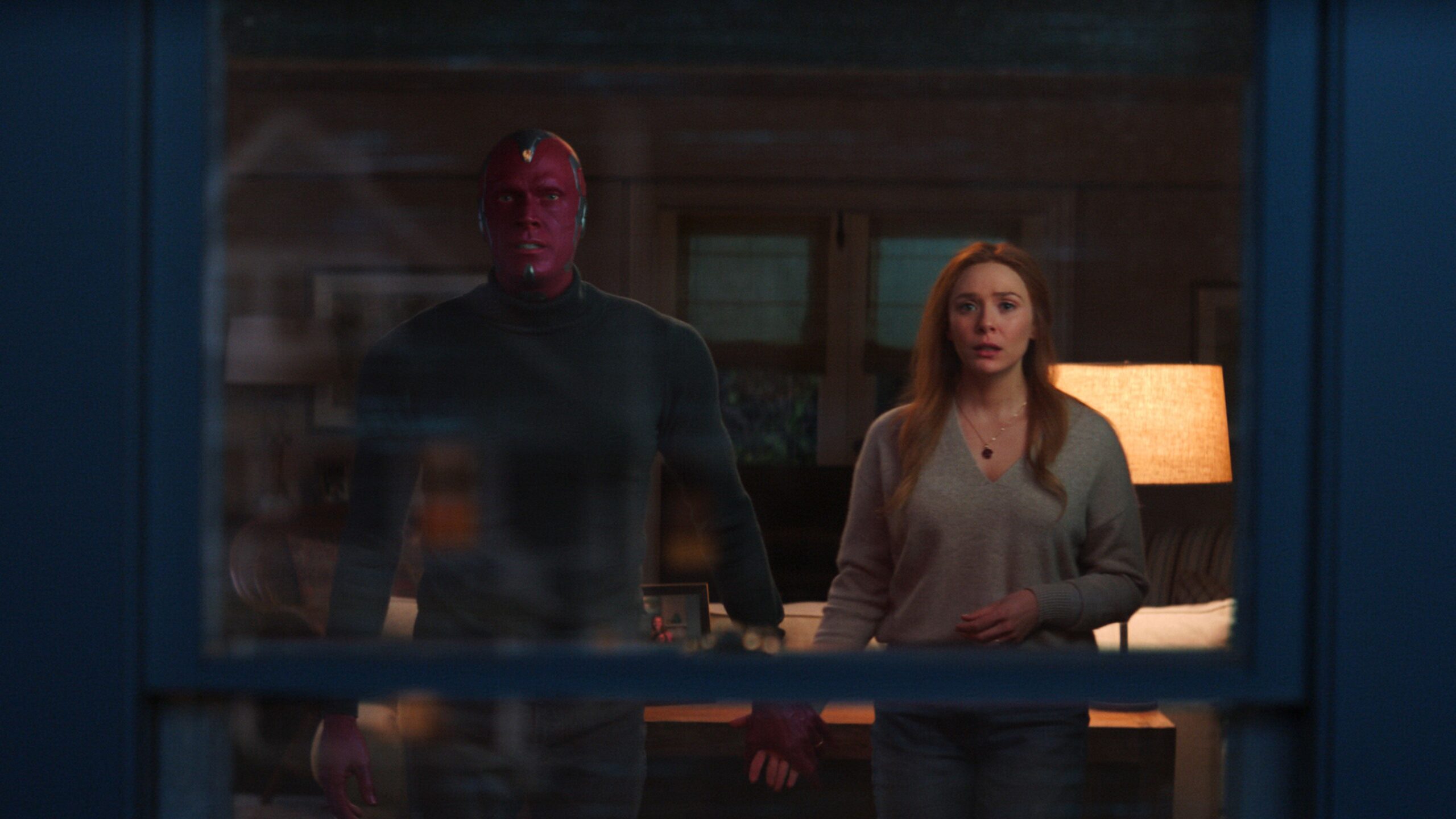 “The Series Finale” is a maximalist vision (sorry) of what WandaVision‘s already been for eight episodes, attempting to balance the small, intimate moments of Wanda and Vision’s tragic romance, with the much larger (and louder) concerns of the MCU. Despite taking place almost entirely inside Westview, there’s an enormity to “The Series Finale” that cannot be ignored, a series of increasingly tiresome set pieces nearly overwhelming the final moments of grace and poignancy seen in the Maximoff home. It is maddening, heartbreaking, as aggressively mundane at its worst as it is heartwrenching at is best – in a lot of ways, it is a fitting end to WandaVision, sneaking in a few quick moments of character in between the inglorious task of being shoved back into the MCU in the space of 35 minutes.

Unfortunately, the way WandaVision ends, it undercuts just about everything that happens in the finale, leaving audiences who don’t have an intimate knowledge of every single post-Silver Age Marvel plot line (*raises hand*). Monica can phase bullets through her? Vision can use White Vision as a USB stick for his memories? Wanda can absorb witch powers? Quicksilver is… a boner joke?

Yes, there is a coherent ending to “The Series Finale,” in that Agatha is defeated, Wanda comes to peace with her loss, and Westview and its inhabitants are released from Wanda’s spell. But these, save for Wanda’s family farewell, are mostly afterthoughts to teases for what is coming next: the Krull who guides Monica to a meeting with… someone. Vision gives his memories to White Vision… and then White Vision isn’t seen again. Quicksilver is… just a dude who lives in Westview, who may or may not have powers (we never get an answer to that, right?). At the end of it all, WandaVision couldn’t just be satisfied with completing its own story – and suffers for it, with all its excitement and attention looking squarely past WandaVision, into whatever is lurking in Phase 4 of the MCU (clearly Agatha knows what’s coming, but of course she doesn’t tell us!).

Frankly, it’s fucking maddening, and the few quiet moments we get with the Maximoff family are precise reasons why. Bettany and Olson are phenomenal when the visual effects and sound are tuned out, and WandaVision can reflect on things like the pain of loss, of saying goodbye, of losing your sense of self among the madness of everyday life (or in this case, superhero-powered adventures through time and space). Those moments, as haunting and touching as they can be (“It’s bad luck to say goodbye in the dark”), are relegated to specific points in the episode, rightfully isolated from the chaos around them, but unfortunately overshadowed by all the questions left hanging afterwards.

It’s interesting how WandaVision slowly abandoned its sitcom-shifting premise, and eventually just became another perfunctory piece of the MCU; “The Series Finale” is an inverse of the pilot, in that sense. Where the first two episodes used the traditional format of sitcoms to drive its emotional tenor, “The Series Finale” uses what remains of its characters to wholly imitate the MCU’s format, including numerous, enormous fight scenes with big noises flashy effects (Vision/White Vision’s constant phasing through each other was at least interesting, I guess?) that existed to serve the master of the content Churn – and ultimately, failing to answer a number of large questions before making its departure.

Which would be fine, if they weren’t questions being raised in the final five minutes; the maddening set of teases this episode ends on is an absolute disservice to what the series was trying to build. Every actual ending in “The Series Finale” feels secondary to the strange, obfuscated not-reveals in those final minutes. We see Monica get and use powers that are never defined (and leave her heading to a meeting with an unknown party); we see Wanda doing her best Dr. Strange, projecting her physical form while she reads the witches’ book in some unknown spinster home; we decidely do NOT see White Vision after he gains Vision’s memories (before Vision dies, FOR A THIRD TIME); oh yeah, and Agatha teases some vaguely awful shit that is forgotten as soon as Krulls re-appear, or Darcy Lewis re-appears to deliver one of her two lines in the episode (which begs the question: why was she even here in the first place? Once she stepped into Westview, this show discarded her and her mediocre punchlines like it was Agatha’s rabbit in the magic show).

In a vacuum, none of these developments are particularly troublesome; but as “The Series Finale” whiplashes between what is, what was, and what is still to be, it feels like WandaVision‘s priorities only hold meaning in the context of specific scenes. That’s not to say we needed to see the aftermath of Westview’s people getting their minds back, or the time between Wanda leaving the town and finding peace in East Whereverthefuck – but there’s no room given for the real resolutions of the season to breathe, existing mostly as a few ellipses on the end of WandaVision‘s spastic, run-on sentence of a series.

(oh yeah – and Wanda debuts her Scarlet Witch mask, which takes the form of… spell energy?).

“The Series Finale” shows its ass in a lot of ways – and yet, there are enough hints of the contemplative, inventive series it was but a few episodes ago, that it made me sad to see WandaVision end. Wanda telling her children she was proud they picked her to be her mother? Brutal (even though the back half of this season did precisely nothing to define those children as characters in any interesting way beyond “oh my – powers!”). Vision’s extremely extended farewell to Wanda? Fucking brutal – if there’s anything these last two episodes have done, it is re-introduce the philosophic curiosity that is Vision, a being torn between physical and digital form, forever struggling to resolve the conflict between his creation and existence.

But as a vehicle to explore Wanda’s trauma, or as a love letter to the dying American institution of the family sitcom, WandaVision leaves a lot to be desired, especially when it pushes those things aside for the most standard MCU fare imaginable. There isn’t enough Hahn-hamming in the world that can elevate a scene of two people pointing energy at each other; when WandaVision is trying to create wonder and scope out of that, it is as fumbling and awkward as its punchlines (there’s a shot of Wanda and Agatha talking while the Visions smash each other in mid-air in the distant background, that is unintentionally hilarious).

While I applaud WandaVision for avoiding a second Major Cameo (especially the very obvious, rumored Dr. Strange visit), it is disappointing to see what this series devolved into, during its final episodes. Rather than inject a famous face or two, Marvel swung the pendulum in the opposite direction, hinting at a handful of big developments and plot twists, but never offering anything remotely tangential to make sense of it. Which puts the audience exactly where Marvel wants it (furiously speculating, and drooling for more) – unless, of course, you tuned in to watch the Series Finale of a television show, and then there’s no way the final five minutes of “The Series Finale” isn’t an abject disappointment (ok, except for Scarlet Witch’s hair and wardrobe in her Big Scene, which is just phenomenal).

To paraphrase Vision’s best (and most meme-d moment): “But what is Phase 4, if not Marvel persevering?” Ultimately, how one feels about WandaVision is reflective of how they view the MCU as a whole: either one will be enthralled by the moments of set-up for the future, or one will be left wondering what happened to the carefully constructed menagerie of curiosity and chaos, suddenly swallowed by witch fights, robot battles – and a military subplot that concludes with the narrative equivalent of a silent fart.

We’ll always have those first two episodes, however, the clearest distillation of what WandaVision could be, at its very best (that, and this week’s discussion about the ship of Theseus, however brief it may be – if you ever wanted to see the MCU butt up against the teachings of anatta, here’s your chance!). However, its heart belongs to a much more recent, culture-consuming movement than the genre it parodies for seven episodes; at the end, WandaVision‘s finale was reflective of the MCU form, taking individual stories and shoving them into a larger whole, no matter how awkward or underwhelming the fit may be (and topping it off with a big, destructive CG fight scene in the third act, of course). WandaVision isn’t a bad series, by any means (and by god, that Scarlet Witch hair/costume combo? Stunning) – but like Vision, it could’ve been so much more, had it only taken a little bit more time to understand and appreciate what made it beautiful, instead of trying to convince us everything around it still mattered.

Musician Highlights the Clever Nature of the Music from WandaVision