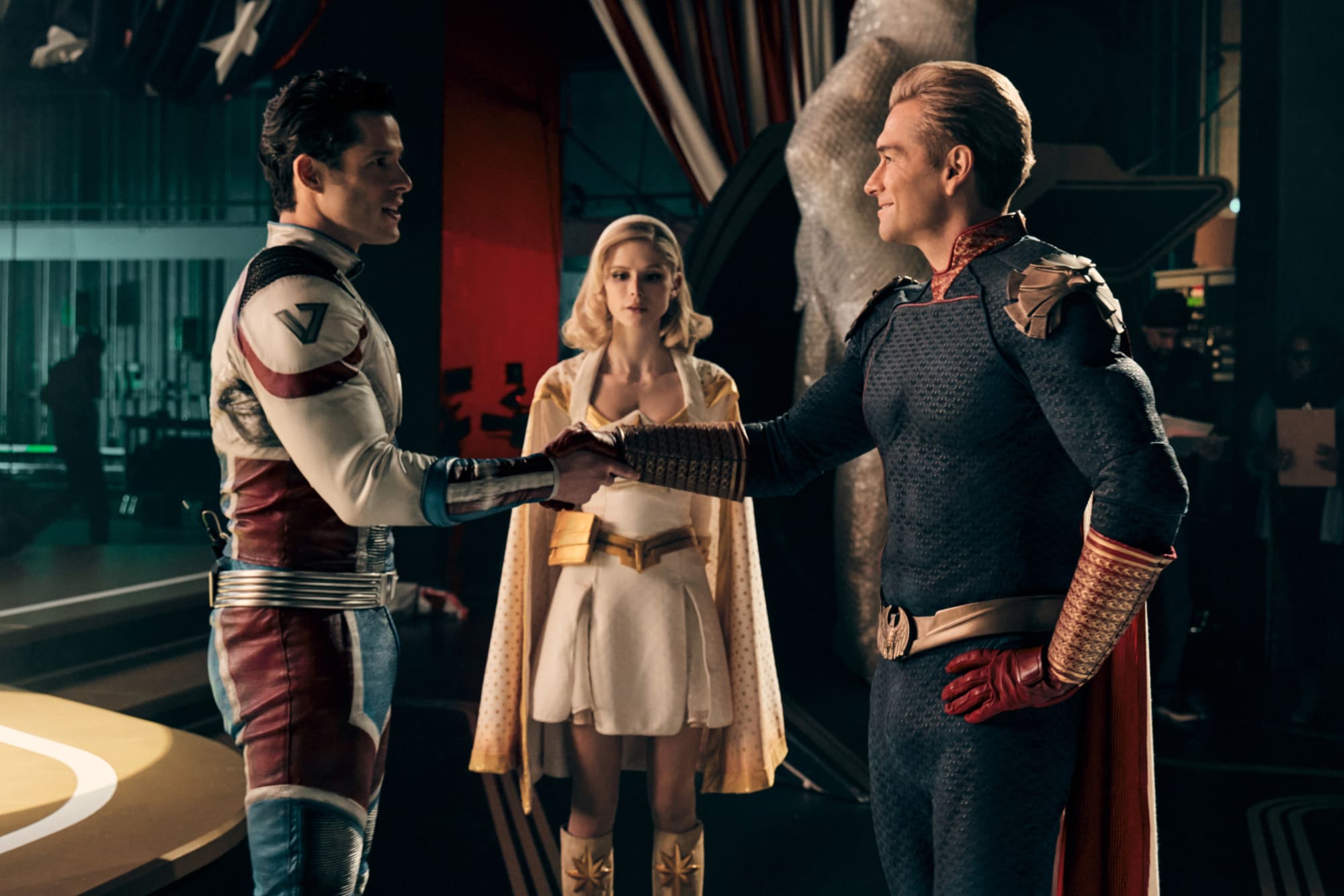 The Boys Season 3, Episode 2 “The Only Man in the Sky”

On The Boys, nobody is happy unless they’re miserable – and for a relentless 58 minutes, The Boys revels in its ability to make everyone squirm, suffer… and of course, bleed a shitload, as “The Only Man in the Sky” forces everyone to eat massive piles of corporate-approved shit to see how they react. And it ends on a fascinating question – what happens when the most psychotic, powerful person on the planet decides they don’t want to hold their fork anymore?

Unfortunately, The Boys holds this back so long, that by the time Butcher is demolishing Gunpowder and Homelander what’s left of his public reputation, all the momentum has been wrung out of the episode. It certainly starts strong, with Frenchie and Kimiko going to a Corporate Pride Month Amusement Park Event (who wants an LGBTurkey Leg?!!) and Hughie squirming about his friendship with Gloria – but then we get a lot of Homelander/Butcher juxtaposition, two men just having a real fucking bad time with it all (Mother’s Milk too, but we’ll get there).

For awhile, “The Only Man in the Sky” juggles its stories well, positing that the fleeting moments of happiness in the season premiere are but a temporary salve to wounds that may have never healed. Though mostly a character for background laughs and superficial drama, Supersonic is a great embodiment of this, a desperate White Haircut willing to grovel for the chance at sniffing some semblance of power and identity for himself; and though I would’ve expected the crowd for “License to Drive” to look more like those NKOTBSB tours that somehow still keep happening, I can appreciate how The Boys goes about presenting all of its superpowered characters as pathetic, pathologic losers in some fashion or another (well, mostly – Kimiko and Starlight being the only real exceptions).

But The Boys is not a show of subtlety or nuance; so like Butcher’s superpowered fists, “The Only Man in the Sky” beats this point into a fucking pulp through its running time. It’s just a fucking miserable day for everyone, as the connections to the season’s larger story of Soldier Boy and Vought’s plans start to come into focus. And while I appreciate the commitment, the rare comedic asides are never able to lighten what is a real goddamn downer of an episode in its back half, and not exactly in the most interesting, dramatic ways.

Though the episode could really have used some tonal diversity at some point – I mean, we open on a trailer for a movie called Not Without My Dolphin (featuring Billy Zane, no doubt – if this season opens every episode with a cameo, I’m kind of ok with it?), and then the episode dives right into the dumpster of Homelander’s fragile emotional state (on his fake birthday) and Hughie/Butcher’s individual miserable experiences trying to live a “normal” life.

It makes the episode’s strongest scene – Butcher and Hughie having a friendly phone call – stick out like a sore thumb; for a brief moment, The Boys stops for this real soft, carefully crafted moment of Butcher expressing real emotion to Hughie. Along with Mother’s Milk, the old crew have realized that no matter how hard they try, they can’t escape their reality. Butcher can never let Homelander (or any supe) go, and neither can Hughie – especially after learning that he’s been duped by Stan Edgar’s adopted child for the past year of his life.

The Butcher/Hughie scene is such an emotionally potent moment, it’s too bad its mostly wasted in between more scenes of pedestrians exploding, and a couple of plot developments that feel like they’re a little more convenient than resonant. Butcher first – while I appreciate The Boys trying to create tension out of the final Butcher/Gunpowder showdown (completely deserving first choice for him to take on, of course), it falls a bit flat. Butcher’s been shot before, and not considering become the very thing he despises; yet after a single gunshot from Gunpowder and a slow-motion video Ryan definitely didn’t make himself, it is a reveal that falls a bit flat… we need to see some of that moral reckoning in Butcher, as this was kind of the last line left for him to cross.

The other, of course, is Stormfront’s suicide…. which I have to think is just a bunch of bullshit, given how we’re learning that anytime a supe under Vought’s control is injured or killed, it is covered up or lied about in some glaringly obvious fashion. That it happens on Homelander’s “birthday”, while he’s reluctantly stopping a (Jewish?) girl from committing suicide, is a matter of pure narrative coincidence I’m willing to accept; but as a catalyst for Homelander to really start flying off the deep end (that, alongside the murderous “it’s your party, you can cry if you want to” burn from Stan earlier), I’m just not buying it. All of the other shit being piled into his mouth by Vought on a daily basis? Sure, Homelander has some fucked up relationships with the women in his life (I’m just sayin’, he need some milk), but his complicated dynamic with Stormfront feels like its being shelved for shiner, newer things, in a way that leaves a critical part of Homelander left dangling (no, not that part).

Regardless, Homelander and Butcher’s bookending moments to close “The Only Man in the Sky” are The Boys reveling in its usual blend of misery and satire, of which the second half is usually only interesting. The exception, of course, is Mother’s Milk, the poor normal guy who just can’t live the normal life that Butcher and Hughie so openly reject. As the legend of Solider Boy begins to build, tying his legend to what appears to be a lot of racist violence in New York around MM’s childhood is an interesting way for The Boys to do its quasi-version of HBO’s Watchmen (though I hesitate to commit to this show trying to insert its voice into the conversation around race in the real world).

Though I fear it might be nothing but a minor detail in the larger story of finding the Superhero Gun, it’s still good to see The Boys trying to find a different tone other than just “well, let’s make these motherfuckers miserable for the sake of it.” The personal stakes for MM have fluctuated from episode to episode, so if the pursuit of Soldier Boy gives MM something to fight for beyond the normal life he thought he want, it could finally enrich a character whose audience support has always seemed to outshine actual character development.

(But do we need the scene of his ex-girlfriend being like “dude, don’t worry about being a dad – go fuck shit up the way I totally used to hate!”? Probably not).

Even more so than the season premiere, “The Only Man in the Sky” is a lot of table setting for the season to come; enhanced, of course, by The Boys‘ very specific brand of violent nihilism, though the short term benefits of its relentless persona have, traditionally, come at the cost of its long term storytelling. Much of this episode, however, suggests that The Boys, for some of its characters, is looking to drill deeper in season three – which, regardless of how well it is executed, should make for a fascinating season to follow.