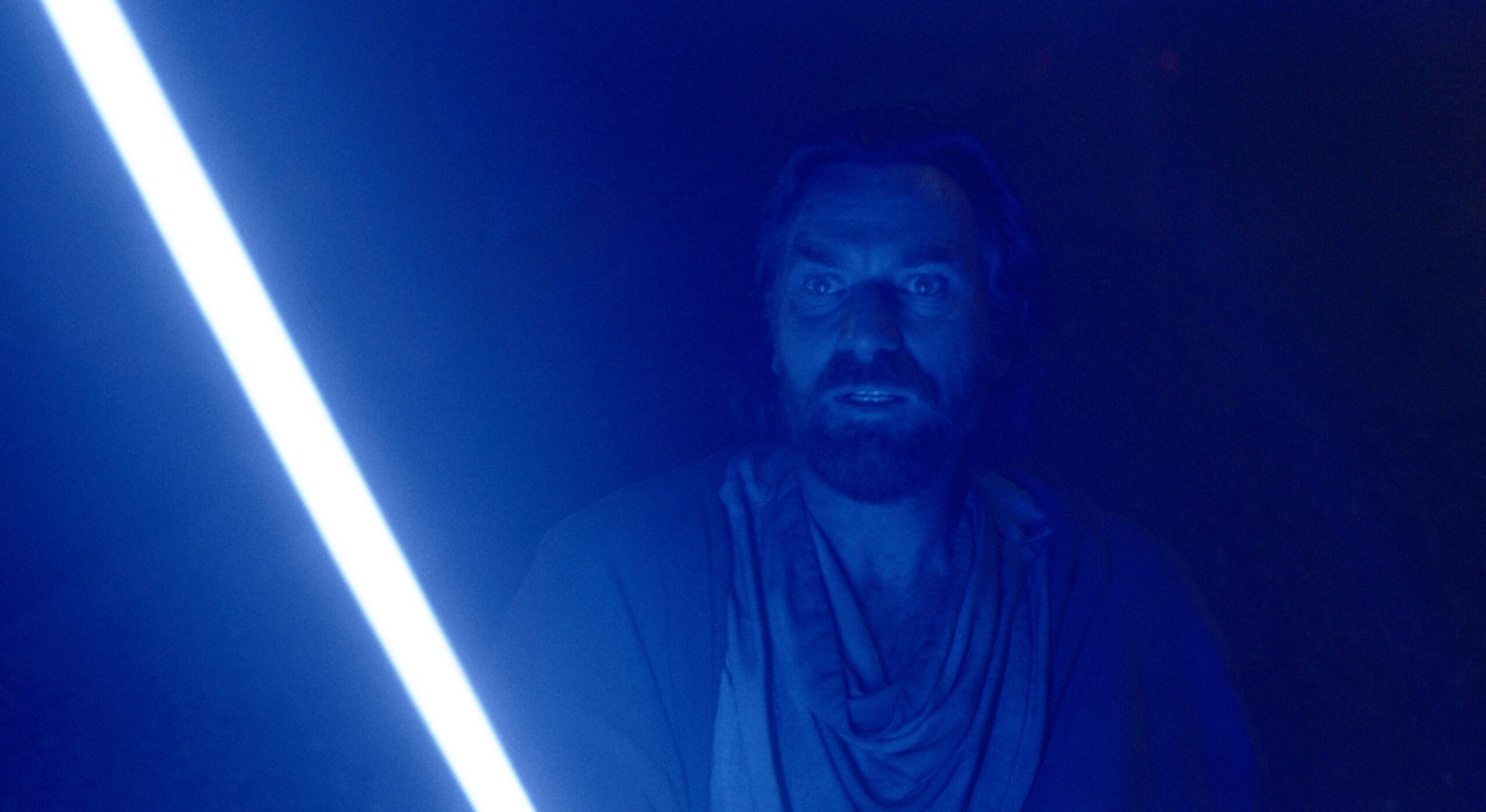 During its two-part premiere, Obi-Wan Kenobi embarked on its six-episode adventure with a captivating and compassionate introduction. As Lucasfilm finally stepped back into its world of post-Star Wars prequels with director Deborah Cho at the helm, Ewan McGregor’s beloved Jedi Master was elegantly brought back to life with all his charisma intact. While both episodes had their share of issues, Obi-Wan Kenobi’s hopeful premiere articulated an exciting foundation for a new journey. With “Part III”, the series runs on the right path as it manages to balance the heart and soul of Star Wars with constant on-edge drama and intense action. Obi-Wan Kenobi’s third episode is thrilling and chilling as it splendidly aims to flesh out its leading characters while introducing the one and only lord of the Sith, Darth Vader.

Picking up where the previous episode left off, “Part III” of Obi-Wan Kenobi finds the titular Jedi and a young Princess Leia on the run from the Galactic Empire and its Inquisitors. As the two travel across the mining planet of Mapuzo evading its military occupation, the heroes search for an ally appointed to them by smuggler Haja Estree. On his desperate mission to return Bail Organa’s adopted daughter home, Obi-Wan must deal with his shaken reality. As he acts as a beacon of hope for Leia he stands as a catalyst of destruction for his former apprentice Darth Vader. “Part III” of Obi-Wan Kenobi has its characters in an emotional state of pure chaos. Every hero is on the run and every villain comes closer to achieving their goals. Fear is always rising in the atmosphere as the third episode excellently heightens its own drama by presenting its cast in complex and traumatic situations fueled by personal stakes.

How Obi-Wan Kenobi deals with the psychology of its characters throughout “Part III” is the episode’s shining aspect. The third entry in the series manages to develop Obi-Wan, Leia, and Darth Vader’s characterizations and relationships in a way that feels authentic to the original Star Wars films. The entire situation of the episode hammers home a reflection of the “balance of the force” theme the Skywalker Saga upholds. Leia feels a sense of responsibility and endangerment from her actions, Obi-Wan is slowly losing to his own struggle while trying to give her assurance, and Darth Vader is engulfed in an unforgiving rage. While there seemingly is an imbalance between despair and hope towards the opening of “Part III” the episode slowly balances out as the show’s lead learns to trust others. Obi-Wan and Leia are tested with their morals and personalities as they embrace the Empire.

“Part III” manages to sell the perspectives of each character by having individual payoffs. Looking at Obi-Wan alone, the opening scene in which Hayden Christiansen menacingly stands in the distance dressed in his Jedi robes is a fantastic expectational twist for McGregor’s character–it perfectly opens the episode and sets expectations in check for longtime Star Wars fans. Through its implications, Obi-Wan Kenobi’s third chapter is able to expertly slip viewers inside the titular hero’s boots as they view his crumbling world from a fractured standpoint. Obi-Wan is mortified by the truth and not prepared for what lies ahead. Obi-Wan never thought that his friend would have been consumed by a mechanical outfit and would willingly slaughter innocent civilians. His early hallucination is what he only imaged his former apprentice could look like when they finally reached their reunion. Naturally, this provokes an even more horrified reaction from Obi-Wan when he meets Darth Vader.

The execution of each character’s placement within the episode feels earned and properly built even though it actually pays little time vocally establishing the reasoning behind each moment. The time that could have gone to building up the episode’s key scenes is thoughtfully done by creating a better relationship between Leia and Obi-Wan all while leaning on what the previous two parts established. The Jedi is able to formally open up about his past by allowing his quippy young sidekick to question who he is and learn more about her life.

While there is plenty of Star Wars content that delves into Obi-Wan’s younger days, the franchise has never explored the character’s birth. As Obi-Wan explains, the Jedi have always been taught to sever their connection with loved ones. Obi-Wan goes on to mention how he remembers only glimpses of his mother and father, but more importantly, he drops a larger bombshell: he has a brother. As a series, Obi-Wan Kenobi is not keen on exploring the titular character’s origins yet it just added even more depth to his history. The sympathetic and comparable histories of Obi-Wan and Leia are used to further establish a bond between them as they explore their problems in a child father-like relationship. Leia may not fully understand Obi-Wan’s difficult position, but they are able to connect by understanding one another’s feelings and experiences.

Of course, the star of “Part III” though is without question Darth Vader. Between the cinematography, the fearsome physicality, and the pure emotional anger audiences can feel behind the character’s lines, there is so much to love about Darth Vader’s first uniform appearance in Obi-Wan Kenobi. Of all the Star Wars characters George Lucas created, Disney and Lucasfilm’s recent productions involving Darth Vader have never hampered the Sith’s legacy. Like his appearances in Rogue One: A Star Wars Story and the animated series Star Wars: Rebels, Disney continues to keep their track record of excellently portraying the world’s most iconic villain. However, here Darth Vader showcases a perfect combination of being sadistic and ruthless as he has no problem snapping necks and dragging Obi-Wan through fire.

Once again, like at the end of Star Wars Episode III: Revenge of the Sith, James Earl Jones returns to voice Darth Vader while Hayden Christiansen dons the asthmatic cyborg suit. As always, the voice actor’s performance elevates the cold vibe of Darth Vader while Christiansen nails the physical presence of the character. Together, the two truly are an unstoppable power team. Jones’ line delivery deserves to be recognized as this time around the actor sounds more in line with the original trilogy iteration of Darth Vader and Christensen has taken a lot of notes from the other actors who have worn his costume. In Rogue One Jones’ age was clearly showing through but in this episode, he sounds practically perfect. Meanwhile, Vader’s physicality is almost as if he walked off the set of the original trilogy. From the way Christensen walks to swinging his lightsaber, the choreography feels as if George Lucas were still giving the directions behind the camera.

It’s not even just Darth Vader though whose appearance feels natural to the Star Wars universe. The action and atmosphere in “Part III” is a lot stronger than in its predecessor episodes. Not only is Obi-Wan using his lightsaber and getting more brutal, but the Inquisitors and Darth Vader are finally getting to flaunt all their training. There is always a legitimate sense of scope and power in “Part III”. While some of Disney’s other recent Star Wars projects have failed to show the true power of the Empire, the order’s forces are on full display in Obi-Wan Kenobi. Deborah Cho makes the Empire feel like an actual threat with supporters as audiences get to see how civilians like the gullible miner Freck willingly help Stormtroopers and proudly wear Imperial flags. The perspective of being a civilian through the lens of the villains is always a welcoming change of pace from the all-heroics of Star Wars’ usual storytelling.

And speaking of making changes from the usual Star Wars storytelling, the concept of an Imperial Officer, Tala (played by Indira Varma), who is a spy within the Empire is finally done right here. By taking inspiration from America’s Civil War, which inspired select aspects of George Lucas’ original Star Wars films, Obi-Wan Kenobi is able to create a traitor with a believable motive and plan. Tala is part of The Path, an underground railroad used by members of the Rebellion to smuggle Jedi across the galaxy. Tala did not receive too much screentime in “Part III” but hopefully this new ally of Obi-Wan will connect the titular hero to the first members of the Rebellion in the coming episodes.

“Part III” of Obi-Wan Kenobi may have old Ben hitting his lowest point yet, but in contrast to the leading character, the series reaches a true Star Wars high as it delves into its traumas and truths. The first rematch between Obi-Wan and Darth Vader is exactly what audiences have waited for as the former friends finally come face to face in a terrifying battle after a decade since falling out. Perhaps with its introduction of The Path, Obi-Wan Kenobi plans to expand its cast during the latter half of the series with some deep-cut characters. No matter who joins the Rebellion or Empire next though, there will be no way to take the spotlight off everyone’s favorite Jedi Master and Sith Lord along with the other key members the show has pushed so far. Obi-Wan Kenobi stood only on high ground this week.

Pistol is a Sanitized and Silly Look at the Sex Pistols