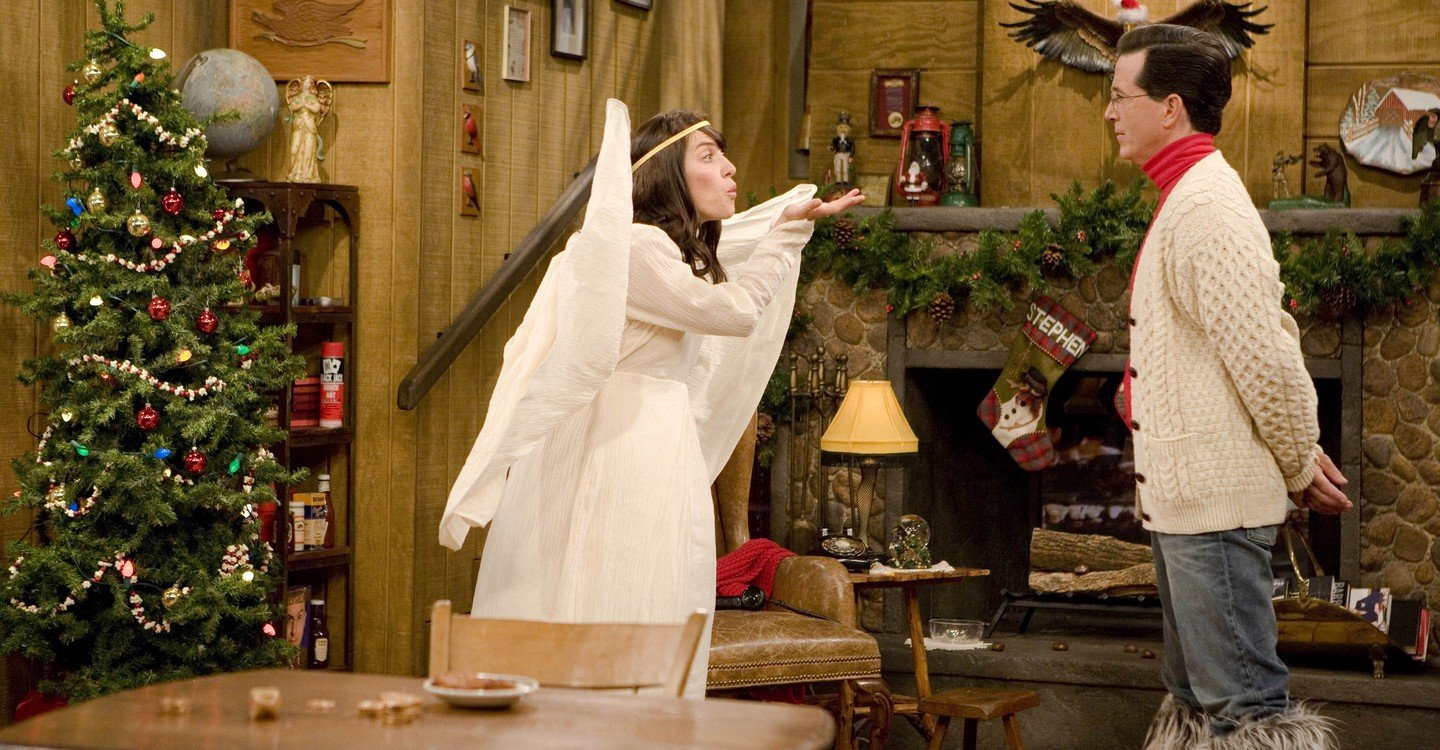 Revisiting A Colbert Christmas: The Greatest Gift of All!

As has often been pointed out over the years, for all of the many accomplishments of the Jewish people in the entertainment industry and in American culture in general, one thing that’s remained just beyond my people’s reach is a signature movie about Hanukkah.

Yes, there’s the 2002 Adam Sandler’s 8 Crazy Nights, an animated movie adaptation of the actor’s famous Hanukkah Song, but the movie is both not that great and not often thought of- and now that we’ve seen a Passover seder in Uncut Gems, it’s not even the Jewish holiday most associated with an Adam Sandler movie.

Other movies, like The Hebrew Hammer and Call Me By Your Name, have featured scenes set at Hanukkah, but neither is a full Hanukkah movie. Last year saw a weird trend of Hallmark movies incorporating Hanukkah and Jewish characters, and even the arrival of a Sephardic Jewish princess on a Hanukkah episode of the Disney Junior Channel series Elena of Avalor.

At one point, a film was in the works about the actual Hanukkah story – the historic revolt by the Maccabees- but that project fell apart in 2012. Considering the director who was attached- Mel Gibson– that’s likely great news for the Jewish people.

There is, however, one truly great Hanukkah TV special. Part of one, anyway…

In 2008, during the period when Jon Stewart’s The Daily Show and Stephen Colbert’s Colbert Report ruled late night on Comedy Central, Colbert hosted a bizarre musical Christmas special called A Colbert Christmas: The Greatest Gift of All!

The special itself was not so great, kind of a parody of televised TV specials of the past, and also not particularly in line with what Colbert was the best at.

But “A Colbert Christmas” did feature one very memorable segment: “Can I Interest You in Hanukkah.” In the musical number, the very Jewish Stewart visited the very Catholic Colbert and introduced him to the holiday known as the Festival of Lights. At one point, Stewart seemed to be trying to sell his colleague on Judaism itself, before Colbert respectively reiterated that he was sticking with Christmas:

The interfaith duet, accompanied by a piano, had Colbert wearing Christmas colors while Stewart sports Hanukkah blue-and-white. The tune has some really wonderful rhymes: “Be sure to tell the Pontiff/My people say Good Yontif,” and “I’m trying to see me as a Jew/I’m trying even harder/But I believe in Jesus Christ/So it’s a real non-starter.” Then it wraps up with a few bars of “Hava Nagila.”

While Colbert has a stage background, and even once appeared in a televised production of Company, Stewart is far from a singer. But that somehow added to the charm.

Much to the consternation of many political liberals, the Stewart/Colbert days are now over. Colbert left The Colbert Report five years later, in 2014, to take over for David Letterman on CBS, while Stewart departed The Daily Show about a year after that, although he still pops up a couple of times a year on Colbert’s show to reprise his old schtick (minus the singing.)

But in the years since, “Can I Interest You in Hanukkah” has remained popular. It’s even been sung by college a capella groups, such as Penn State’s The Statemen:

Hanukkah begins on the evening of December 22, but in the meantime, put on your yamacha, sing some Hanukkah songs, and hope that someday we get that signature Hanukkah movie. Like Stewart sang, “happy holidays, you Jews!”

Editor’s Note: This article was originally published on December 9, 2019.

Euphoria‘s Temporary Return is Amazing, in a Whole Different Way