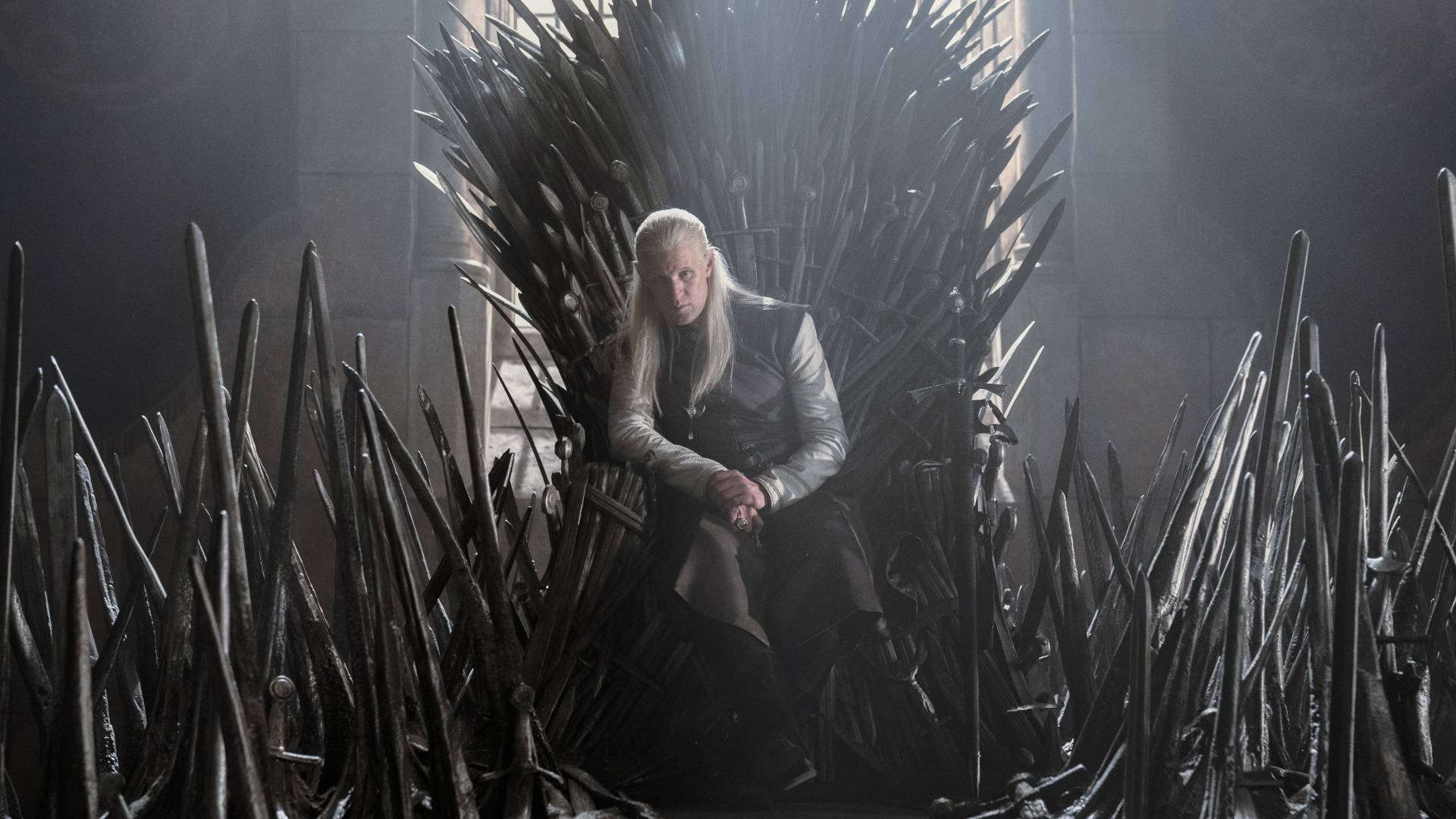 Editor’s note: This article contains what could be a minor spoiler of the ASOIAF universe.

For fans of Game of Thrones, it may take some time to adjust to the new prequel series House of the Dragon. Anyone who has spent eight years invested in a show defined by a large cast of sharply-defined characters with big personalities, a huge world to explore, and an increasingly inflated amount of soap opera-level drama might find House of the Dragon’s pilot a bit subdued. The characters – while compelling – are much more understated, the drama is much more subtle, and the narrative is much more condensed and streamlined. House of the Dragon is not interested in simply becoming another Game of Thrones, and it is exciting to see it begin to carve out its own identity.

The pilot episode begins by recounting a narrowly-averted civil war. King Jaehaerys Targaryen (Michael Carter) needs to choose a successor. While his granddaughter Rhaenys Targaryen (Eve Best) is next in line, the Tagaryen dynasty has never been ruled by a woman before, and Rhaeny’s cousin Viserys (Paddy Considine) is named the rightful successor instead. Despite conflicting opinions about who the best ruler would be, a war of succession is avoided: Rhaenys is dubbed “the queen that never was,” and Viserys takes the crown.

The bulk of the episode takes place years after this decision, and the episode primarily focuses on Viserys’ daughter, young Rhaenyra Targaryen (Milly Alcock). With no brothers, Rhaenyra is the most logical heir to her father’s throne; however, since she is a woman, her uncle Daemon (Matt Smith) is named next in line instead, mirroring the intersection of gender and heredity explored in the prologue. However, Daemon is a violent and impulsive man, and many fear that he would be a bad fit as ruler of the realm. To make things even more complicated, Rhaenyra’s mother Aemma (Sian Brooke) is pregnant; however, after a series of miscarriages and infant deaths, there is a relatively small chance of her giving birth to a male heir. It is clear from the first episode that succession and lineage are going to be primary concerns of the series, as are issues related to gender roles, power, and patriarchy.

It is impossible to ignore the obvious similarity between this plot and the main focus of Game of Thrones. For those unfamiliar, Game of Thrones follows a power vacuum caused when there is no clear successor to the throne, as several potential monarchs fight for their royal claims. Since House of the Dragon begins by establishing several potential candidates for a throne held by an aging and somewhat inept king, it’s hard not to make comparisons: it’s somewhat strange that House of the Dragon chose such a similar plot, since it risks accusations of simply copying its predecessor. However, it is very clear by the end of the pilot that any similarities between the two shows are only on the level of literal plot; stylistically and tonally, House of the Dragon is paving its own path.

When Game of Thrones premiered 10 years ago, audiences were treated to a cast of immediately iconic, often extravagant, and very clearly-defined characters. From the moment Jaime Lannister nonchalantly shoved a child out of a window to protect the secret of his incestuous relationship, it was clear that the show was not scared to be soapy, over-the-top, and a bit ridiculous. House of the Dragon immediately seems much more somber and subdued. It launches with only one outlandish character (Daemon), along with one compelling-but-grounded character (Rhaenyra), and a cast of other characters that don’t particularly stand out quite yet.

There are a few characters with promise. Rhaenys and her husband Corlys Velaryon (Steve Toussaint) have potential as a couple who were almost monarchs until a misogynist society deprived Rhaenys of her title. Fabien Frankel is promising as the charismatic swordsman Ser Criston Cole who makes waves at a tournament with his stellar performance and charming demeanor. Rhaenyra’s best friend Alicent Hightower (Emily Carey) is also intriguing, particularly because of Carey’s strong chemistry with Alcock. The actors are all promising, and the characters seem interesting, yet none of them have quite had the chance to make a huge splash yet, and it is not quite clear if they will get to live up to their potential. Despite the first episode’s hour-long runtime, none of the characters besides Daemon and Rhaenyra have really had the chance to make much of a strong impression.

The series brings back the blood, violence, and sex that Game of Thrones is known for, but again these elements are approached in a very different way. While full of serious moments, Game of Thrones alsooften veered into playfulness and soapy theatricality with its depictions of sex and violence, particularly earlier on. House of the Dragon immediately makes it clear that it intends to pursue a more consistently serious, somber direction; while the violence is still gratuitous, any jaw-dropping theatrics are sidestepped in favour of a more grave sadness that resembles some of Game of Thrones’ more harrowing moments from its later seasons. As a celebratory jousting tournament quickly turns into a bloodbath or a regular city watch patrol turns into an excuse for mass violence, the episode maintains a bleak and sad tone that rarely makes room for levity or humor.

The somber tone and less distinctive characters aren’t necessarily bad things; in fact, the choice for House of the Dragon to pursue a notably different direction from its predecessor is exciting because it gives the show a chance to carve out its own unique identity.  While big characters  like Jaime or Tyrion Lannister can make a great first impression, more subtle characters have the chance to grow on an audience over time in a different way. While fans may miss the humor, wit, and theatrics of Game of Thrones, this show’s more subdued approach may open it up to its own brand of entertainment that allows it to explore the world of Westeros in a very different way. Thus far, the premise, writing, performances, and narrative are compelling enough that the series seems promising and worth getting excited about, and the new direction that House of the Dragon is taking is shaping up to be a good one. By the time the episode is over, the episode generates enough political intrigue, dramatic energy and anxious anticipation to leave viewers longing for more.

– While most of the performances are much more subdued than those in Game of Thrones, the one notable exception is Matt Smith as the outrageous and outlandish Daemon. Smith is positively phenomenal in a role that demands the sort of chaotic energy that is perfect for the former Time Lord.

– Milly Alcock and Emily Carey are slated to be replaced later in the season by Emma D’Arcy and Olivia Cooke as their characters get older. Alcock and Carey have been amazing so far, and their chemistry is absolutely undeniable, so hopefully the older actresses are able to maintain this energy.

– The show’s huge budget is mostly well-spent, and some of the costumes are absolutely beautiful. Daemon’s dragon-inspired tournament armor is particularly eye-catching, and the design work is fantastic. Unfortunately, the budget didn’t seem to help with some relatively terrible wigs.

– Interviews have emphasized the show’s desire to centre women’s perspectives, a claim which Roxane Gay has rightfully noted is ironic considering the largely male-led creative team. As she says of one interview, “this is a very funny line in an interview of two men, conducted by a man, about a show created by two men based on a book by a man.”

– While the show does attempt to confront patriarchal oppression and seems like it wants to highlight a feminist perspective, its depiction of violence against women so far seems to be veering uncomfortably towards the much less respectful treatment that often characterized its predecessor. Because the show claims that it wants to tackle women’s treatment under patriarchy, and particularly because it deals with extremely sensitive topics like reproductive rights and gendered violence, it’s strange that the show’s creative leadership roles are primarily held by men.

She-Hulk: Attorney at Law Episode 2 Stumbles Through a Weightless Tale

The Best Game of Thrones Moments Part 3: The Greatest Moments of Season 8