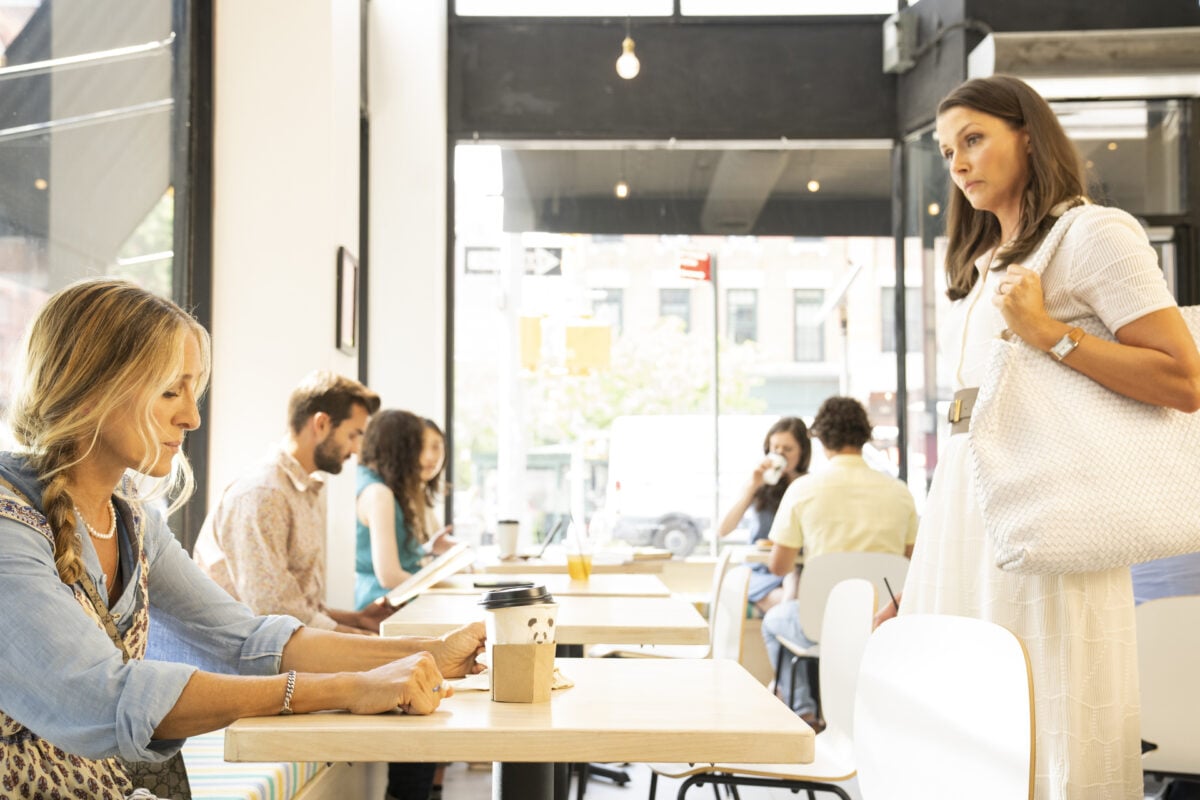 If you’ve been following HBO Max’s And Just Like That…, the continuation of Sex and the City, then you might have held your breath going into this week’s episode. Although Sex and the City was beloved by fans when it aired on HBO, And Just Like That… failed to stick the landing when it came onto the streaming scene last week with its first two episodes, “Hello It’s Me” and “Little Black Dress.” The series opened with heavy-handed exposition, lazy writing, and cringe-worthy character moments, which is why this week’s installment had audiences nervously anticipating where the show would take them next.

Thankfully, “When in Rome,” felt more like Sex in the City and a lot less disappointing than viewers may have been expecting.

Carrie (Sarah Jessica Parker) is still struggling with the loss of John (Chris Noth), who passed away unexpectedly in the series’ pilot episode, much to the displeasure of long-time fans of Sex and the City. Although she’s doing better on her podcast and agrees to attend the taping of Che’s (Sara Ramirez) Netflix special, she explains that her apartment hasn’t felt like home since Big’s death and that she no longer eats or sleeps. Miranda (Cynthia Nixon) joins Carrie for the reading of her husband’s will and it’s revealed that he’s left $1,000,000 to his ex-wife, Natasha (Bridget Moynahan), unbeknownst to Carrie or John’s former assistant.

Carrie struggles to understand why John left the money to Natasha and tells her friends that she feels like her late husband is suddenly a stranger to her. After rummaging through his belongings, she finds a photo of his old dog—one she didn’t know existed—as well as a Pinkberry punch card. Carrie begins to imagine the worst: that Big and Natasha were having an affair (similarly to how Carrie was having an affair with Big during his marriage to Natasha). Determined to get to the bottom of this, Carrie sends Natasha an email as well as a message on Instagram but is quickly blocked by John’s ex-wife. Horrified and outraged, Carrie and her friends go down to Natasha’s workplace and she tries to meet with her. Although she sees Natasha enter the building, her secretary tells Carrie that Natasha’s in Rome on business.

Eventually, Carrie runs into Natasha at a local coffee house and the two of them finally have a chance to talk. Natasha admits that she’s equally confused about why John left her the million dollars as they haven’t spoken since their divorce. Carrie thinks it’s possibly been meant as an apology for what happened all those years ago. She also takes the time to tell Natasha that she’s sorry for the affair she had with him. Natasha accepts her apology and gives Carrie her condolences for Big’s death before leaving.

Throughout the episode, we also see Charlotte (Kristin Davis) struggle with Rose’s (Alexa Swinton) admission to her mother that she doesn’t “feel like a girl.” Charlotte isn’t sure how to process the information, so she confides in Anthony (Mario Cantone). Unfortunately, Anthony doesn’t take Rose’s confession seriously and suggests that Charlotte dismiss it until Rose is older.

However, later that night, Charlotte attends Che’s Netflix special along with Miranda and Carrie and has a moment of clarity about Rose. Che talks about their own transness and how their family was so loving and supportive, and it’s clear that Charlotte wants the same positive coming-out experience for Rose too. We can only hope to see more of their journey next episode.

Miranda, meanwhile, is going through changes. It’s revealed that she and Steve (David Eigenberg) haven’t had sex in years and Charlotte suspects that Miranda has a drinking problem after she finds empty bottles of liquor in her backpack and sees her drinking a few glasses of red wine before Che’s show. After the special, Miranda decides to visit a gay bar where she runs into Che. The two of them share an intimate moment as Che shotguns Miranda and it’s clear to audiences that Che’s routine, which spoke about changing who you are and discovering yourself as you continue to grow, has unexpectedly resonated with Miranda.

The episode ends with Carrie going to the apartment she once shared with Big and, instead of going in, walking to her old apartment from Sex and the City, which she refers to as home.

The first two episodes of And Just Like That… focused on how the women of Sex and the City had changed. Although they were intended to be positive new directions for the trio, they felt out of character for, well, the characters. The fact that Carrie, who built her career on talking about sex and relationships, struggled to talk about masturbation in her podcast was jilting and strange. Miranda making the change from corporate to civil rights law was great until it was paired with a white-saviour complex and cringe-worthy behaviour. Charlotte trying to connect with her daughters and not quite succeeding felt strange given her previous drive to be the “perfect” mother.

However, “When in Rome” seems to have course-corrected some of the previous issues. Carrie is able to talk about sex once more and seems to be excelling at her job, even though it’s one she shouldn’t have been struggling with to begin with. It was also wonderful to see her finally talk to Natasha and own the affair she had in the previous series. Miranda is now focusing her good intentions on better understanding herself and trying to find footing in a world she was once so confident in. And Charlotte’s instinct to listen and love Rose for who they are is a beautiful display of growth for her character. She could have taken Anthony’s advice but, instead, listened to what she knew in her heart was right.

Che’s comedy special was also fun to listen to. Although it felt a bit strange to just have a section of stand-up comedy in the middle of the show, the topics felt relevant and fresh. Their comment about having booked four hours to deal with their family, but only needing four minutes, was such a relatable experience for so many queer people out there. Plus, their final punchline of the set was so good that it’s worth watching the episode just to hear it.

We’re Hopeful for Next Week’s Episode

Although the series was off to a rocky start and left fans unhappy with the progress the women had made in the years since Sex and the City concluded, “When in Rome” gave us a solid continuation of the show and some much-needed course correction for the beloved trio. This was the first episode that made us truly excited to see what life has planned for Carrie, Miranda, and Charlotte and we can only hope next week’s episode is even better. Be sure to catch the next installment of And Just Like That… next Thursday, available to stream on HBO Max.