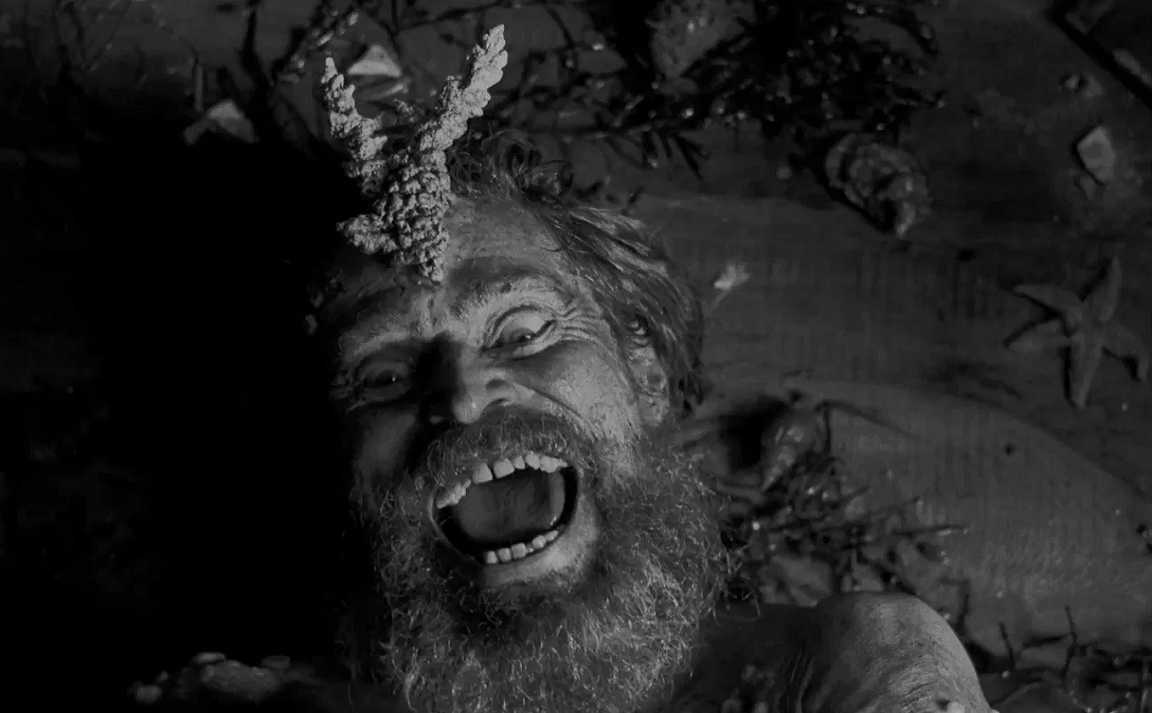 Robert Eggers blew everyone away with his debut feature, The Witch, a movie that ratcheted up the paranoia until there was nowhere to go but supernatural. While his sophomore feature doesn’t feature a Black Phillip-stand in, The Lighthouse trades witchcraft and satan for mermaids and Lovecraft. The result is another film drenched in paranoia, as its two lead actors give some of the funniest, nuanced, and entertaining performances of their careers. The Lighthouse isn’t just Eggers proving he’s not a one-trick pony — it’s Eggers proving he’s one of the greatest horror filmmakers working today.

Ephraim Winslow (Robert Pattinson) is a newly appointed lighthouse keeper, and his first posting is with Thomas Wake (Willem Dafoe), a more experienced keeper who has previously tended to the lighthouse they are operating. Winslow is immediately put to work on keeping the lighthouse functioning and ensuring the day-to-day menial tasks are completed. Meanwhile, Wake spends his nights atop the lighthouse, keeping watch from the beacon. Sequestered on this remote, vacant island for four weeks, Winslow slowly starts questioning why he can never spend his nights atop the lighthouse, and Wake grows concerned with why a young, handsome man such as Winslow would ship himself off to a desolate island instead of living his life alongside people. As the two pry into each other’s lives, a very palpable tension arises that quickly spirals into a frenzied madness and mistrust that never lets the audience be at ease.

Surprisingly, the stress and anxiety that manifest in Winslow and Wake’s arguments are only further escalated by how funny The Lighthouse can be. Dafoe’s character is extremely flatulent, and it makes Pattinson’s character go insane, while drunken shanties never stop being fun to hear; Winslow also makes enemies with a seagull that carries a weight of superstitions, and the screen is packed with all the nautical-themed accouterments a sea-faring tale can muster before breaking into absurdity. All of this humor can quickly turn into horror at the flip of a coin, and it quite frequently does just that. One minute the two characters are exchanging jokes, and the next they’re trading blows. The whole thing has an air of fun to it because Pattinson and Dafoe are more than game to go all-out with Eggers. Yet make no mistake — this is a film where the comedy is just another way of easing tensions while also turning the screws on the audience.

Glimpses of madness and unimaginable terrors are where The Lighthouse distinguishes itself from The Witch. The delusional fervor in Winslow is a sight to behold, especially with the way the film presents itself in black-and-white. Despite its lack of a color palette, shots are gorgeously lit and utilize bright light to convey more mystical, enchanting imagery, while shadows carry a dark, foreboding reality inside them. It’s a movie that looks exceptionally good and needs to in order to maintain the haunting atmosphere. Even beyond the lighting, the compositions can be filled with stark contrasts of shadows and light, usually intending to highlight either a mystery on the horizon or despair looming ever closer.

Beyond even just its beautiful imagery, The Lighthouse has characters who behave in ways that befit their very subtly explored personalities. Yes, Thomas Wake is a crotchety old man who refuses to give up the gargantuan responsibility of manning the lighthouse beacon, but throughout Dafoe’s entire performance is someone hiding more sinister motivations. Winslow keeps to himself, perhaps unsure of where the line is that he cannot cross in front of Wake, but he also has a fire in his belly and too many unanswered questions as to why he would ever take post in a position such as a lighthouse keeper. Even then, The Lighthouse’s explorations of guilt and masculinity are just waves crashing against an island of treachery and delusion. There are many ideas presented, but the thrill will be discovering those later —after experiencing the absurdly delightful narrative that Robert and Max Eggers have scribed.

All of this is to say that The Lighthouse is truly a one-of-a-kind experience. The Lovecraftian horrors are just the tip of the iceberg for what plays out like an expensive stage play. Dafoe and Pattinson deliver some of the most fun and intense performances of their careers, willing to get dirty in the name of horror. There are definitely off-putting moments, especially for those unfamiliar with The Witch, but if you’ve already sold your soul to Black Phillip then you’ll probably be more than ready to head into the oceanic depths of madness with The Lighthouse.

This article was originally published on September 9, 2019, as part of our coverage of the Toronto International Film Festival.

Toronto After Dark 2019: ‘Extra Ordinary’ Riffs on the Paranormal

Clerks and “I’m Not Even Supposed to Be Here Today”