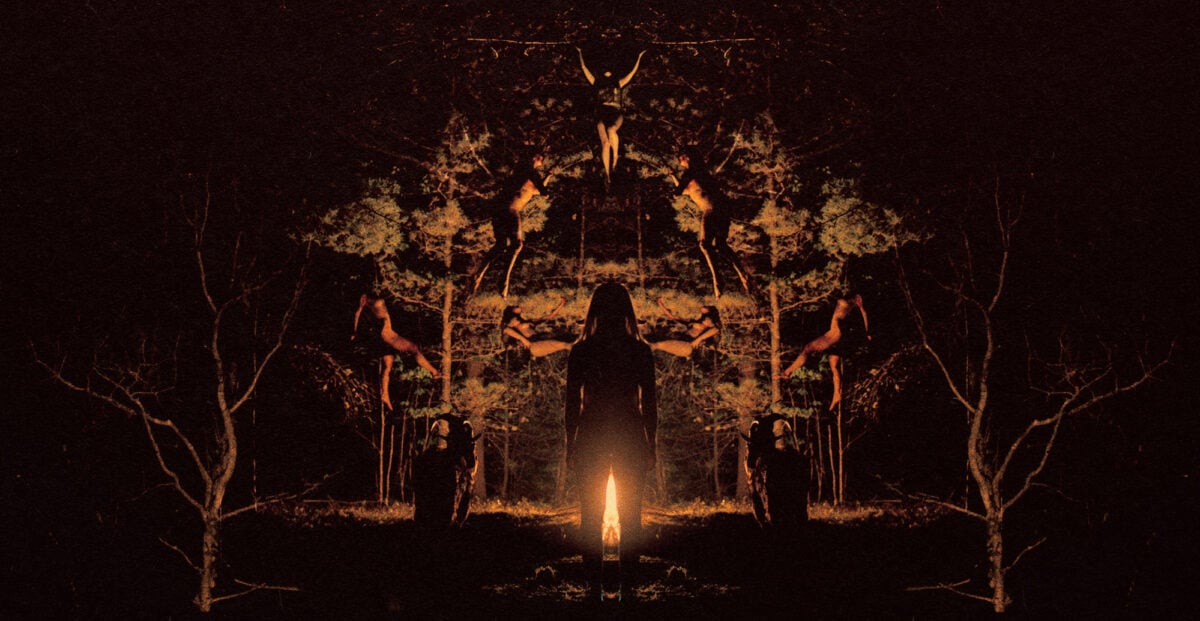 The VVitch: A New-England Folktale

Robert Egger’s feature film debut The Witch, is a terrifying exploration of a puritanical family’s descent into hysteria. Eggers is stingy with the film’s supernatural elements, preferring to force the audience to decide what is real versus what is a manifestation of the character’s anxieties. The result is a film finely tuned for horror aficionados with a preference for old-fashioned psychological terror.

The movie begins during the resolution of an undisclosed dispute, as the leaders of a small New England hamlet pass a judgment banishing a puritanical family from the confines of their town. The ruling forces William (Ralph Ineson), his wife Catherine (Kate Dickie), and their five children to settle in a clearing on the edge of an unexplored forest, and far away from any populated areas. One afternoon Thomasin (Anya Taylor-Joy), the family’s eldest child, takes the family’s youngest child (still just a baby) out near the edge of the woods. Amidst a game of peek-a-boo, Thomasin covers her eyes for a brief moment, before lowering her hands to find the baby gone. Despite a frantic search, the family never finds their baby. Unable to make sense of the tragedy given their devout faith in God, the family begins turning their animosity towards someone (or something) fallible.

The Witch has an intangible quality that lingers throughout the movie; a feeling like a blast of arctic air that runs down the spine, leaving one tense and rigid. The Exorcist has it, The Shining (Which Eggers sites as an inspiration) has it, and Eggers knows exactly how to apply it. This isn’t saying The Witch is on par with those two films, just that the atmosphere is highly evocative of said films.

The Witch is one of the rare movies that just knows how to make the viewer uncomfortable. The film’s unsettling soundtrack allows it to gnaw its way deep into the audience’s fear receptors. The music alternates between a constant drone, and a throbbing beat which climaxes in shrill, blood-tingling screeches. The soundtrack is creepy enough to effect the audience on a primal level; it sets off the same fight or flight warning receptors that used to spike when early man needed to run from saber-tooth tigers.

The movie is called The Witch, but at the film’s core is a story about a family that is under attack on multiple fronts; they’ve been cast out of society, live in isolation with a crop that can’t sustain them through the winter, and they’ve lost their youngest child. The family is devout and God-fearing, so when terrible occurrences fall upon them, they can’t make sense of them within the context of their devotion. What they need is an emotional release valve, queue the movie’s eponymous Witch. Eggers toys with the audience’s interpretation of what is real and what is imagined, but the one inarguable antagonist is fear. Eggers revels in mixing guilt, suspicion and animosity in a big black screen-writing cauldron and serving up a terrifying brew of one family’s slow descent into a state of antagonism and malice.

A baby snatching witch is the embodiment of evil, and knowing she is lurking out in the woods just beyond one’s home would keep anyone from sleeping, but nothing is as terrifying (and heart-breaking) as a threat from within one’s own home. Most of the film focuses on watching the family unravel. The movie’s cast does a spectacular job of maintaining the film’s disturbing atmosphere when the supernatural elements aren’t in play. Kate Dickie borrows from her old Lysa Arryn character on Game of Thrones, playing a grief-stricken mother that’s in deep need of holding someone accountable for her pain. Ralph Ineson plays William as a man whose piety makes him a monster. William is capable of anything as long as it can be passed off as in God’s will — an easy feat for the sanctimonious. Harvey Scrimshaw is also great as Caleb. Caleb does what young boys in these sort of films do, because if The Shining taught audiences anything, it’s that creepy little boys give people bad dreams for life.

The star of the film is Anya Taylor-Joy as Thomasin. Taylor-Joy has the unenviable task of playing the film’s heroine while also planting the notion in the audience’s mind that she may have a darker side. Taylor-Joy nails her performance and because of her fine work, The Witch is sure to ingrain itself into a whole generation of children’s nightmares.

The Witch has all the makings of a divisive horror movie; most people will either love or hate it. The Witch is not for gore-hounds or people that love slasher flicks. The picture relies on its atmosphere rather than in your face scares, features authentic 17th century dialogue (Eggers utilized actual old-English journals while writing the script), and is just as interested in exploring the roots of hysteria as it is in the supernatural. Those that patiently — and bravely — sit through The Witch will find an unsettling movie, loaded with tension that keeps escalating until the film’s final frame.

‘La La Land’ and The Cost of Dreaming

‘Berberian Sound Studio’ – the sounds between fantasy and reality