Connect with us
'Roma' is far and away one of the great achievements in cinema, utilizing the art form to transport the viewer somewhere they don’t know well, but feel alive inside.

With barely even a mention of circumstances surrounding the protagonist, Roma is an exceptionally personal story told in the most real way possible: without context. From its opening shot of a driveway being cleansed over and over by waves of soap and water that crash upon the dirty pavement, Alfonso Cuaron introduces viewers to a story that doesn’t care if you know more than what’s outside the frame. However, paying attention and letting the beautiful 70mm imagery wash over will reward viewers with an intimate, yet sprawling epic that is incomparable — and one deserving of being seen on the biggest screen with the best sound system. Roma is Cuaron’s most beautiful film, one that provides a look into a country and time period from the lens of someone who fondly remembers its charm — cracks and all.

Centered around Cleo (Yalitza Aparicio), a maid for a middle-class/slightly affluent family, Roma deals with a year in the life of multiple generations of families, each from different socioeconomic backgrounds. While the major focus is on Cleo, a lot of where Roma shines is how her struggles intersect with others around her, including her employer, Sofia (Marina de Tavira), who is confronted with the absence and betrayal of her husband.

While the parallels are not one-to-one, watching a young character like Cleo go through a significant conflict while the older Sofia passes on advice but also contends with her own set of issues is one of the many ways Roma sucks you into its world. Cuaron has such a great handle on the characters and how they interact with one another, that even with a 135-minute runtime, it’s no surprise that by the end of the film it feels like you’ve been on a journey that you don’t really want to leave. 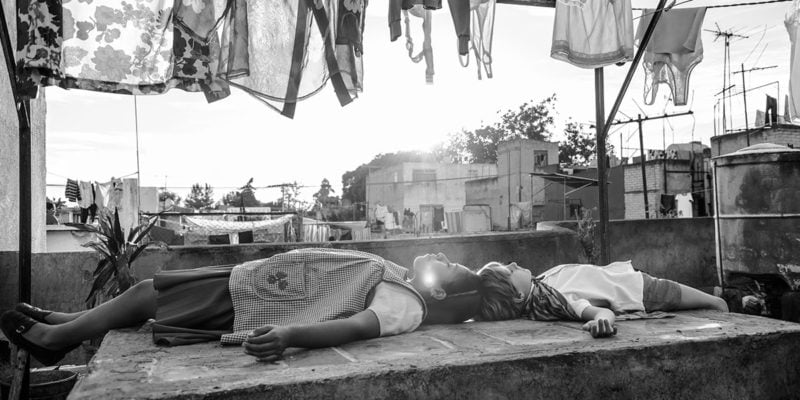 Cuaron does his own cinematography here, and tends to let the camera linger in a static position for many scenes. Once again, by doing this he lets his compositions fixate on a character’s emotional arc through a scene — or in some cases, he simply puts us in that time and place. The opening shot is just one of many instances of Roma letting itself wash over the audience. An extended shot situated on an absurd character tooting his own horn in front of an army of youth is presented in the same way as many of the other static camera shots, but is used to heighten the absurdity of the scenario, and works to great comedic effect.

By not cutting up his movies too much, Cuaron is often able to evoke an abundance of emotions, as we’re stuck in that atmosphere for longer periods of time. A movie like Roma often feels more like a documentary than a traditional fiction narrative because of this decision, and it pays off in spades. The omission of a score also benefits the film, as marching bands and off-screen radios do plenty to impose an understanding of how music matters to Mexico City and Mexico’s culture.

Roma is quite easily a masterpiece, an absorbing tale that will have you laughing, crying, and trapped in its tenser sequences. It’s been hard to find the right words that capture the singular brilliance of this movie because it feels so utterly personal, but it is more than willing to let audiences into its embrace. Roma is far and away one of the great achievements in cinema, utilizing the art form to transport the viewer somewhere they don’t know well, but feel alive inside. It’s a staggering monument to the power of film, and why there are some technical aspects of the medium that simply need to be experienced on the biggest screen possible.

TIFF 2018: ‘Climax’ Is a Hallucinogenic Nightmare